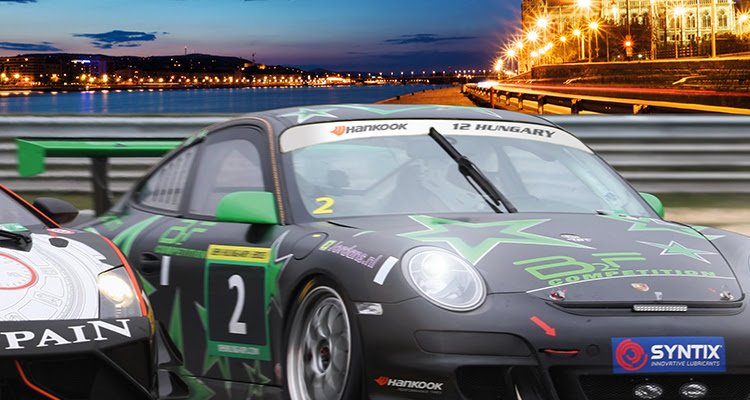 On Friday and Saturday this week (3 and 4 October), endurance race teams and drivers from all over the world will get together at the Hungaroring for the Hankook 12H HUNGARY, the round-the-clock-race for GTs, touring cars and 24H Specials. “The seven-day weather forecast is quite nice, with sunshine and temperatures around 20 degrees on Friday and Saturday. We have a good mix of cars, so we are looking forward to great racing to conclude the season in our 24H SERIES powered by Hankook,” says Gerrie Willems on behalf of CREVENTIC. The Dutch agency is the organiser and promoter of the 24H SERIES powered by Hankook, in co-operation with the DNRT (Dutch National Racing Team).

The cars in the A6 category seem to be the favourites for outright victory in the twelve-hour race. Among the entrants are Swiss teams Hofor Racing and Stadler Motorsport, respectively the winners of last year’s 24H BARCELONA and this year’s 24H DUBAI. Hofor Racing has Swiss drivers Michael Kroll and Roland Eggimann, German Kenneth Heyer and Dutchman Christiaan Frankenhout entered as the drivers of its Mercdes-Benz SLS AMG GT3 while Stadler Motorsport is running a Porsche 997 GT3 R for Swiss Adrian Amstutz, Mark Ineichen and Rolf Ineichen. Opposition is coming from German team SPS automotive performance with a Mercedes-Benz SLS AMG GT3 for Germans Valentin Pierburg, Tim Müller and Lance-David Arnold.

Six cars are running in the SP2 class with good chances of an overall podium finish, as seen in many previous endurance races. German team SPS automotive performance and Austrian outfit ZaWotec Racing have entered Porsche Cup cars, Artas Racing from Lithuania is running a Lexus IS-F, Dutch team Red Camel Racing is bringing its regular Audi R8. The silhouette cars in this class are the MARC Focus GTC and the GC Automobile GC 10 V8, run by their respective factory teams from Australia and France.

The A5 touring car class will see the battle between BMW and Peugeot. Team Altran from France is running a pair of Peugeot 208 GTis, while BMW is represented by Hofor-Kuepperracing from Germany (E46 M3 Coupé), RTR Projects – KOP race from Belarus (Z4) and Rimo from Lithuania (335 D). The D1 diesel class also looks set for good competition with Red Camel-Jordans.nl from The Netherlands with a SEAT Leon TDI, two Volkswagen Golf Diesels, run by Kaukas from Lithuania and KPM Racing from the UK respectively, as well as two French cars, run by Danish teams: DK Racing Event’s Renault Clio and HM Motorsport’s Peugeot RCZ

Hankook once again is the title sponsor and exclusive tyre supplier of the event. On Friday, 3 October, the action starts with an optional private test from 9.00 till 13.30 hrs followed by free practice from 15.00 till 16.30 hrs, qualifying from 16.45 till 18.00 hrs and night practice from 19.00 till 20.00 hrs. The race starts on Saturday, 4 October, at 8.00 hrs and ends at 20.00 hrs, immediately followed by the prize-giving ceremony. Live timing, photos and videos can be found at: live.24hseries.com while there are also regular updates on Twitter (@24HSeries) and Facebook (24H Series). A 24 minutes’ highlight show will be broadcast on Motors TV at a later stage. More information about the Hankook 12H HUNGARY and the other rounds of the 24H SERIES powered by Hankook can be found at:www.24hseries.com.