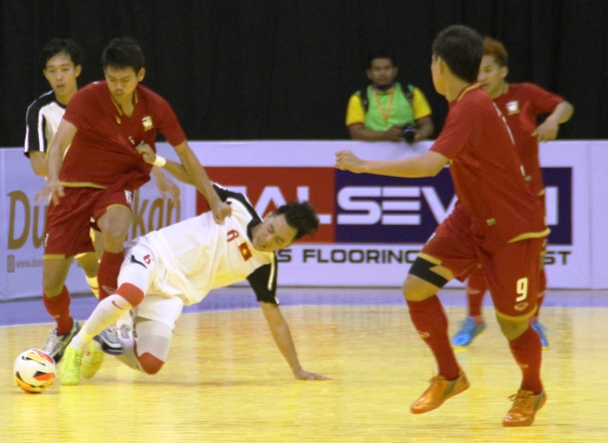 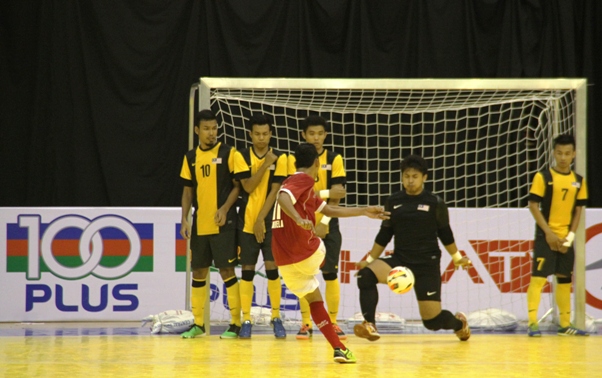 Vietnam staged a major surprise when they stunned defending champions Thailand 2-0 to complete the preliminary round of the AFF Futsal Championship as the group winners. The match however saw four expulsions, three from Thailand and one from Vietnam.

Vietnam will now face Australia, last year’s runner-up, who themselves were surprised by Indonesia earlier today. A spirited Indonesian side defeated Australia 4-1. The other semifinal clash between Thailand and Indonesia will take place on Thursday.

“This is the first time that we have beaten Thailand. It showed that Vietnam are making progress,” said Vietnam coach Bruno Formoso. “The match is a little bit robust but this is the Spanish style of Futsal.”

The Thais started the match as the clear favourites but their plans hit a bump when one of their top players, JetsadaChudech, was given the red card along with Vietnam’s Pham DucHoa after both players were involved in a clash.

Despite the early setback, the Thais quickly got their engine room up and running and were soon making inroads through the heart of the Vietnamese defence. As the match progressed, the Thais soon began to realize that they were going to be in for a rough ride as the first half ended 0-0.

After the break, the Vietnamese began to intensify their attacks and finally were awarded a penalty just before the half-hour mark. Thailand’s PiyapanRatana was adjudged to have handled the ball and was sent-off.  A Thai official on the bench protested was also sent off. Tran Van Vu’s penalty was saved by ChaleamsriPuangsri, to the delight of the Thais.

But that joy did not last long as Tran Thai Huy weaved his way and blasted Vietnam ahead in the 31st minute. Four minutes later, the game was all but over after PhungTrong Luan scored the second.

In the second game this evening, hosts Malaysia, who are already out of the running for a place in the semifinals, demolished Timor Leste 12-2. Malaysia finished third in the standings behind Indonesia and Australia.