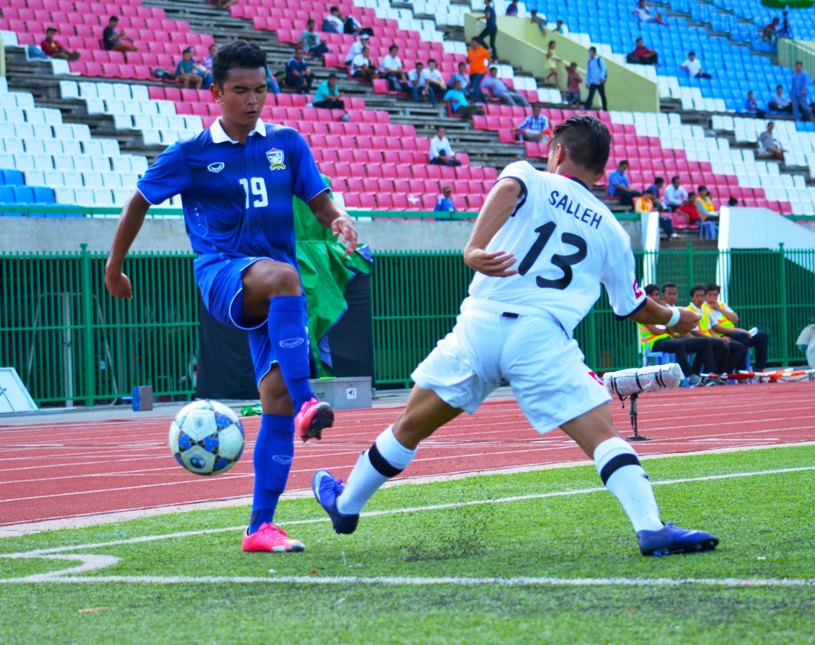 Defending champions Thailand picked out a slim 1-0 win over winless Brunei in their second game of Group B of the AFF Smart Under-16 Championship as Laos continued to struggle at the National Olympic Stadium.

The Thais, winners a year ago at the same venue, made several changes to their squad which demolished Timor Leste 3-0 two days ago as they allowed Brunei more run of the ball.

At least seven players were rested for the match this afternoon as Thailand coach Chaiyong Khumpiam kept his tactics close to his chest preferring instead to just do enough for the second full points in the group.

“We have to keep certain things to ourselves – that is only natural,” said Chaiyong. “The important thing is that we win the game.”

The only goal of the game came early in the 20th minute when Tharadon Sornyoha raced down from the left for a low cross that was flicked past two Brunei defenders before sailing past keeper Muhd Amirul Hakim Zulkarnain and into goal.

The win made sure Thailand kept in touch of the group leaders Cambodia who have also picked up six points from two matches played this far.

Cambodia will be Thailand’s next opponent in two days in what will be a crucial test to decide the group winners.

In the meantime, the lack of fitness saw Timor Leste being held to a 1-1 draw by Laos.

Slow-to-warm-up Laos were lucky to escape the early punishment from Timor’s constant harassment although they did finally succumb to pressure in the 25th minute when off a Rivaldo Correia cross from the right, defender Khampanhgna Keodoungdeth ‘cleared’ the ball into his own goal.

Timor maintained their quick passing style of play well into the second half before Laos finally woke up in the last half hour to return the favour.

But Laos’ hope of getting the equaliser in the 64th minute was dashed when Khampanhgna muffed his penalty to underline a day the captain would rather forget.

As Timor Leste began to tire towards the tail end of the tie, came Bounphachan Bounkong running in from the left as he swept past three defenders before unleashing a low drive for the equaliser.

“It was disappointing,” said Timor team manager Amandio Sarmento. “But it would seem that we could not cope with Laos’ high running game especially towards the closing stages of the tie.”