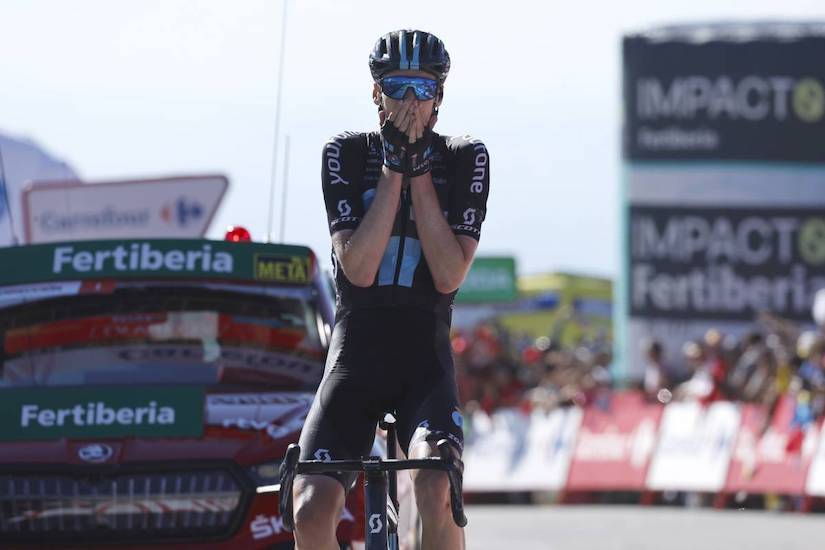 The highest summit finish of La Vuelta 22 hosted a brutal showdown with an all out battle on the slopes of Sierra Nevada. The young Dutchman Thymen Arensman (Team DSM) tamed the 22.3km long ascent after he spent the whole stage on the offense.

He was the only rider from the breakaway who was able to resist Enric Mas (Movistar), 2nd, and Miguel Angel Lopez (Astana Qazaqstan), 3rd. Remco Evenepoel (Quick-Step Alpha Vinyl) was under pressure early on the climb.

He managed to retain La Roja but he lost time to Mas, Lopez, as well as Primoz Roglic (Jumbo-Visma). Ahead of the final week, the Slovenian 3-time winner of La Vuelta trails by 1’34’’ and Mas follows with a gap of 2’01’’.

On the eve of the final rest day of La Vuelta 22, the peloton wrap up week 2 with a massive showdown on the slopes of Sierra Nevada, with a summit finish set at 2,512m of altitude. 145 riders start from Martos to face the “queen stage”.

The battle for the break is on from the start, with Rohan Dennis among the first attackers. Primoz Roglic’s Australian teammate is very involved in making the break. A group of 29 riders eventually gets away on the first ascent of the day, the cat-3 Puerto del Castillo (summit at km 33.8).

AG2R Citroën and Jumbo-Visma up the ante

Remco Evenepoel’s teammates are willing to let the gap increase. Ben O’Connor’s AG2R Citroën react when the gap hits 6’35’’ halfway through the stage. Lawson Craddock (BikeExchange-Jayco) goes solo at the front. He faces the ascent of the cat-1 Alto del Purche (9.1km at 7.6%, km 110.4) with a gap of 1’15’’ to his chasers.

Jay Vine catches him just before the summit to tighten his stranglehold on the polka-dot jersey. More riders bridge across to make it a 12-man group towards the final ascent of the day. Meanwhile, Jumbo-Visma up the ante in the peloton.

An all out battle from the bottom of Sierra Nevada

Soler still leads the way into the last 10km, while Arensman sets off in pursuit. Behind them, Lopez attacks with 11km to go and gets back to David De la Cruz, who was part of the breakaway. Mas also joins them.

Evenepoel has to chase himself while Arensman gets back to Soler and drops him into the last 7km of ascent. He still is 1’25’’ ahead of Mas and Lopez. Evenepoel controls the gap to around 25’’ but he can’t react when Roglic attacks just ahead of the final kilometre.

Arensman resists until the line, 1’23’’ ahead of Mas. Lopez finishes 2’’ further down. Roglic follows with a gap of 1’44’’ and Evenepoel crosses the line 36’’ after Mas. The stage is set for a nail biting final week to Madrid. – www.lavuelta.es