Home 2022 Audi and Krajete Filter CO2 Out of the Air 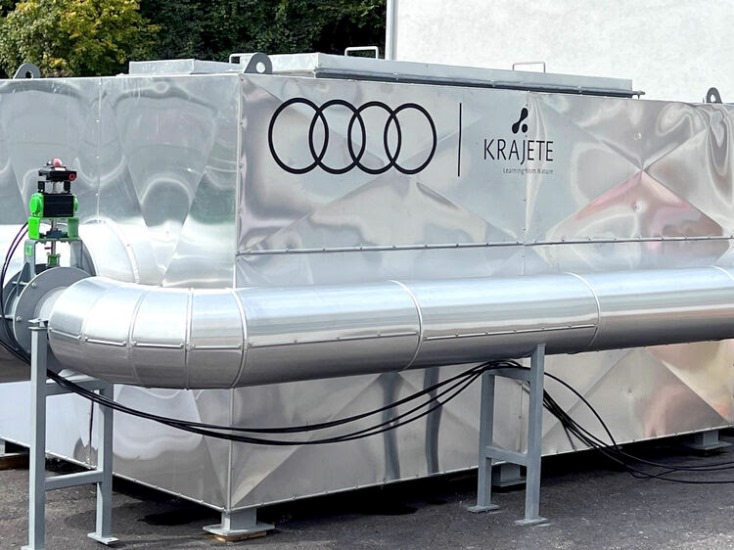 Innovative plant in Linz with 1,000 tons of separation capacity per year

Hagen Seifert, Head of Sustainable Product Concepts: “Thanks to its modular design, the system can be expanded in various ways – an important step towards scaling”

AUDI AG and the Linz-based green tech company Krajete GmbH are jointly developing new technologies for filtering emissions from ambient air. In addition to robust adsorber materials, these so-called direct air capturing technologies (DAC) are based, above all, on innovative processes. They make far-reaching energy and cost reductions possible.
The latest example of the two partners’ development work is a new plant in Austria, where we are using an inorganic filter material that can hold a very high load of molecules and is also very insensitive to the effects of moisture. As a result, it is not necessary, or only necessary in particular cases, to pre-dry the ambient air to be filtered.
This increases efficiency and reduces costs. The temperature and pressure conditions for absorbing CO2 molecules and subsequently removing them from the adsorption surface are very similar. This significantly shortens the adsorber’s loading and discharge cycles. In other words, more CO2 can be removed from the ambient air in a short period of time.
The filtered air is released back into the environment after the adsorption step. The recovered CO2 is then available in a highly concentrated form as a raw material for permanent storage or for a wide range of industrial applications. The large-scale plant near Linz, which is currently in the process of going into operation, can filter 500 tons of CO2 per year.
By the end of the year, another module will increase the plant’s capacity to 1,000 tons. The electricity required to operate the plant comes from a photovoltaic system on the company’s premises.
Alexander Krajete, CEO of the technology development company that bears his name, says that “we started from the premise that, for reasons of efficiency, we would let the process run at ambient pressure. Then we modified the adsorber materials and the physical conditions in the plant until we found the optimal flow rate, meaning we filtered the maximum amount of CO2 per unit of time.”
This made it possible to significantly reduce the cost of sequestration, which is already down to the low three-digits range in euros per ton of CO2. The long-term goal is to make carbon dioxide usable for industrial purposes. In doing so, Krajete GmbH and AUDI AG want to facilitate breakthroughs in the necessary applications.

“The technology makes it possible to remove CO2 directly from the atmosphere, regardless of location, and is therefore an important decarbonizing measure,” says Hagen Seifert, Head of Sustainable Product Concepts at AUDI AG. “In addition, the system technology can be expanded in a variety of ways thanks to its modular design.”

As a next step to the existing large-scale plant in Linz, AUDI AG is currently looking into the possibility of using sources with higher concentrations of CO2 and filtering additional emissions such as nitrogen oxides. In addition, DAC technology could be implemented on a much larger scale at Audi’s site in Győr, Hungary. A plant with a capacity of 25,000 tons per year is conceivable.
Two-degree target: Why Audi is involved in developing direct air capturing technologies
AUDI AG wants to play its part in limiting the global average temperature increase to less than 2 degrees Celsius. The company, therefore, takes sustainability into account in all its business decisions and has set ambitious targets for itself. By 2025, the Volkswagen Group aims to reduce the ecological footprint of passenger cars and light commercial vehicles by 40% over their entire life cycles as compared to 2018. Each particular measure is contributing to achieving carbon-neutrality throughout the company by 2050 at the latest.