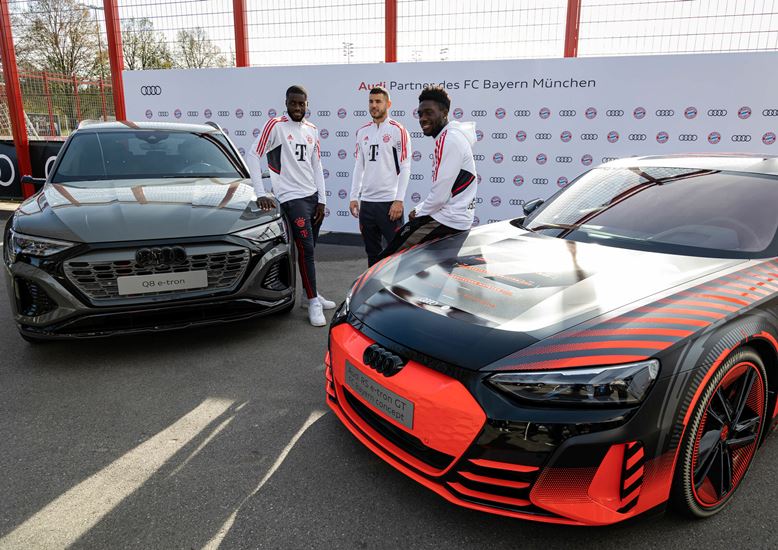 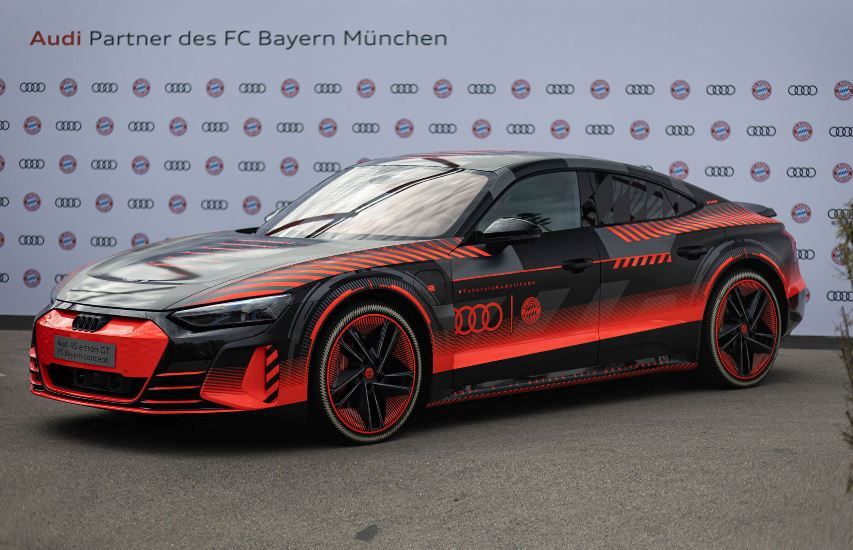 Up close and authentic: Thirty Audi employees will remember this vehicle handover for a long time to come. They had the opportunity to deliver the new electric company cars from the Audi Forum in Ingolstadt to the FC Bayern Munich headquarters on Säbener Straße and personally hand them over to the club’s pro soccer players.
There was a meet and greet with FC Bayern board members Oliver Kahn and Andreas Jung at Bayern’s headquarters. Giovane Élber told a few anecdotes while showing the Audi employees around the training grounds.
This year’s official handover of the new vehicle fleet was not in Ingolstadt as usual but at Säbener Straße in Munich. Thirty Audi employees enjoyed the unique opportunity to take 15 vehicles to Munich and deliver them directly to the Bayern pros – a first, even for the players and officials of Germany’s record champion club.
The employees were treated to a meet and greet with FC Bayern board members Oliver Kahn and Andreas Jung. Giovane Élber also took them on a tour of the 80,000-square-meter training ground, giving behind-the-scenes glimpses of the reigning German champions.
Pia Hackner (Technical Development department): “My friends and I are often in the Allianz Arena’s South Stand, but seeing the players close up is a once-in-a-lifetime experience. This memory will stay with me for a long time.”
Audi has backed FC Bayern Munich since 2002
FC Bayern players and officials now drive the all-electric premium Audi RS e-tron GT1 or Audi Q4 e-tron and Audi e-tron Sportback models as company cars. The Audi RS e-tron GT1 FC Bayern concept also made a showing at the handover, its unique anniversary design marking the 20th anniversary of the partnership.
The front and roof wear the design like an “anniversary jersey” – featuring the FC Bayern Munich club crest as the finishing touch on the rear.
Each season is honored as a highlight in its own right, framed on a diamond-style timeline in contrasting red against a black background.
Audi has backed Germany’s most successful soccer club since 2002. The brand with the four rings has also been a shareholder in FC Bayern München AG since 2011. In 2021 Audi also began supporting the FC Bayern women’s team.
Head of Audi Brand Henrik Wenders says: “This partnership showcases how two strong brands are authentically shaping the future. When imagination and passion come together, great achievements are the result.
That is what unites FC Bayern and Audi.” Representing Audi, Philipp Noack (Head of Sales Germany) and Christian Schüller (Head of Sports Marketing Football) handed over the new vehicles to the FC Bayern players.
Oliver Kahn, CEO of FC Bayern Munich: “FC Bayern is lucky to have had Audi at its side as a reliable partner for more than 20 years now. We’re united by the way we constantly strive for perfection and always think forward – for instance, when it comes to mobility. Our mutual goal is to remain on the road to success with Audi in the future.” 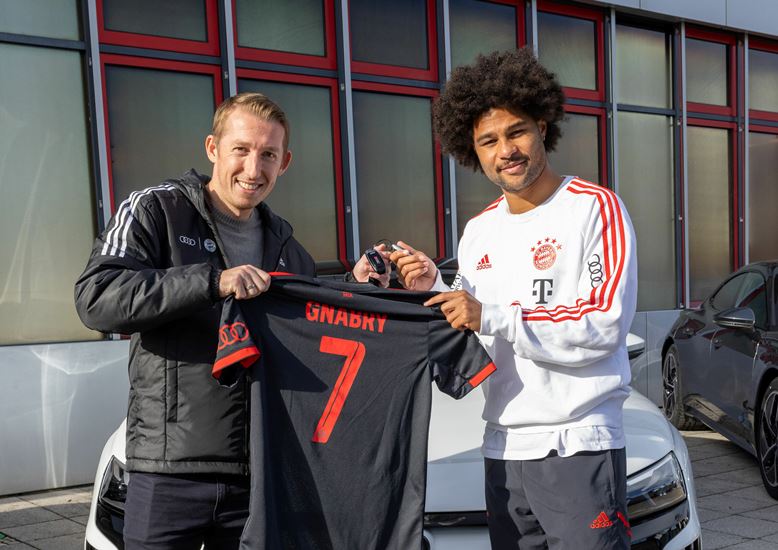 On the road to the electric future together
Audi heralded its electric future around four years ago with the Audi e-tron. Since then, the company has consistently followed its roadmap and now has an eight-model-strong electric portfolio. By 2026, it will be over 20. Starting then, Audi will only launch all-electric models on the global market.
Together with FC Bayern, Audi is raising awareness for the forward-looking electric mobility concept. In September 2020, FC Bayern and Audi kicked off their journey toward sustainable mobility together.
Since then, the club’s fleet has been continuously electrified. Many of the squad and club management are now on the road with all-electric vehicles. Brand new here is the Audi Q8 e-tron, which was unveiled on November 9 this year.
As the top model in the electric SUV portfolio and a crossover, it boasts an optimized drive concept, improved aerodynamics, higher charging performance, and expanded battery capacity.