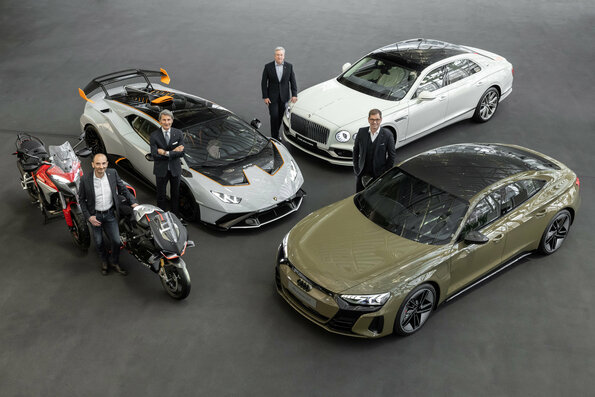 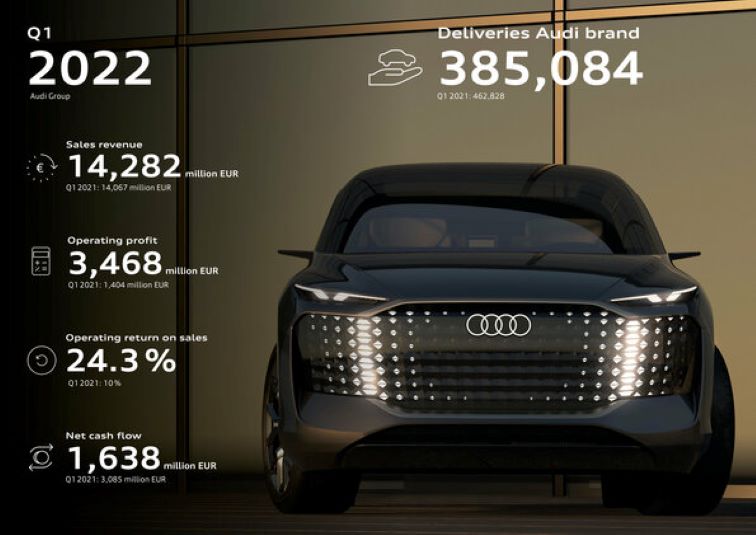 Record first-quarter operating profit and operating return on sales of 24.3 percent also thanks to support from raw material hedging transactions

Despite the quarter being marked by ongoing bottlenecks in semiconductor supply, war in Ukraine, and renewed lockdowns in China, the Audi Group is still reporting strong financial figures after the first three months of the year. As a result, the company has further strengthened its financial basis for its transformation towards e-mobility and digitalization.

For the first time, the Bentley brand is also consolidated within the Audi Group. Revenues increased by two percent. The group generated the highest operating profit ever in a first quarter – driven by a strong price position, a disciplined approach to fixed costs, and support from the valuation of raw material hedges, operating profit for the first three months of the year grew to 3.5 billion euros.

Despite geopolitical uncertainties arising from the ongoing war in Ukraine and the tense supply situation, the Audi Group is still confirming the forecast for fiscal year 2022 announced in its annual report, and expects to deliver between 1.8 and 1.9 million vehicles across the group’s different brands and to achieve an operating margin of 9 to 11 percent.

“The Audi Group and its brands Audi, Lamborghini, Ducati, and Bentley are decisively responding to current challenges. The keys to this include synergies across the group, our disciplined approach to fixed costs, and our strong brand positioning. The key financial figures for the first quarter confirm that we are on the right course,” commented Jürgen Rittersberger, Member of the Board of Management for Finance and Legal Affairs at AUDI AG.

The brand group delivered 390,826 cars to customers in the first quarter (Q1 2021: 465,265). In the wake of supply shortages and renewed COVID-19 lockdowns in China, the group cannot fully meet the sustained high demand for Audi brand vehicles. In light of this fact, the brand with the four rings delivered 385,084 vehicles to customers, compared with 462,828 in the above-average same quarter last year. At the same time, Audi increased deliveries of its battery electric models (BEV) by 66.2 percent to 24,236 vehicles (Q1 2021: 14,583).

The Audi urbansphere presented in April provides a current glimpse into the future of electric premium mobility. The concept car represents a luxurious third living space as a mobile lounge and office with complete privacy and a comprehensive range of high-tech features. Like the Audi skysphere and Audi grandsphere studies, the Audi urbansphere is designed for Level 4 automated driving, a technology that Audi is working toward introducing in the second half of the decade together with CARIAD, the Volkswagen Group’s software company.

The Lamborghini and Ducati brands increased their deliveries in the first three months by 4.8 percent and 5.1 percent, respectively. The newest member of the brand group, Bentley, presented 3,203 vehicles to customers.

This operating profit performance reflects the group’s strong brand positioning and its ongoing discipline with regard to fixed costs. In addition, the extremely high profit of 1.2 billion euros from valuation effects of raw material hedges, in particular on nickel and aluminum, were another key earnings driver. Yet even without this effect, the operating margin would have still stood in the double-digit percentage range.

As part of its Vorsprung 2030 strategy, the Audi Group defines ESG as a strategic field, embedding ESG criteria into all corporate and product decisions. For greater comparability and transparency,Audi is voluntarily reporting in accordance with the new EU taxonomy regulation. . In the first quarter, EU-taxonomy-compliant revenue reached 11.3 percent of the Audi Group’s total revenue.

In a challenging environment, Ducati increased its revenues by 14 percent. The company posted an operating profit and an operating return on sales of 25 million euros and 10.7 percent, respectively (Q1 2021: 21 million euros; 10.5 percent).

Improved result from business in China

The group’s net cash flow reached 1,638 million euros (Q1 2021: 3,085 million euros), once again demonstrating the Audi Group’s exceptional ability to finance its own operations. The unusually high figure for the previous year was partly attributable to later incoming payments from the high-volume fourth quarter of 2020.

Net cash flow in the first quarter of 2022 reflects lower positive effects from working capital and disinvestments in participations with the disposal of national sales companies within the Volkswagen Group.

Taking the foreseeable consequences of the war in Ukraine and the COVID-19 lockdowns in China to date into account, the Audi Group is confirming its forecast for the fiscal year 2022. The brand group expects to deliver between 1.8 and 1.9 million cars and generate revenues of between 62 and 65 billion euros. The operating return on sales is expected to fall between 9 and 11 percent. Net cash flow is expected to reach a value of between 4.5 and 5.5 billion euros.

Further information can be found here:
Quarterly Update and Fact Pack for Q1 2022

*Prior-year figures not included in the key financial figures of the Audi Group.