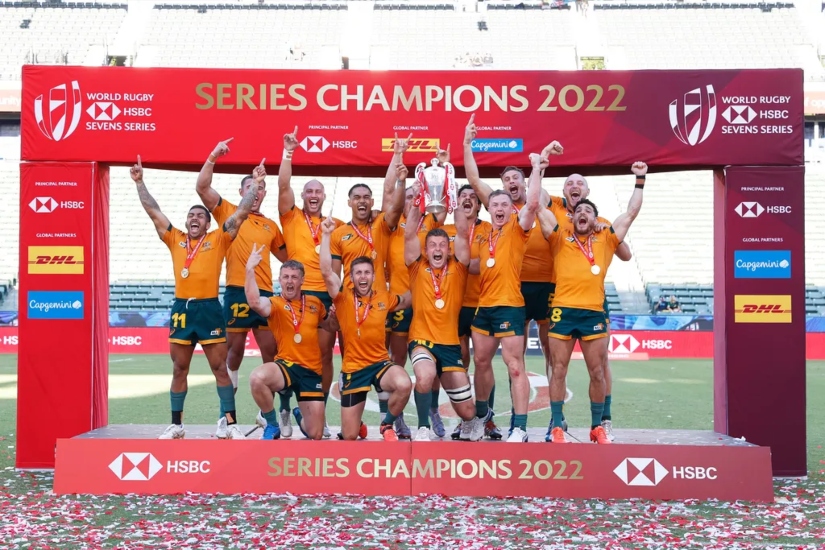 A spectacular finale to the men’s HSBC World Rugby Sevens Series 2022 saw Australia make history by being crowned Series Champions for the first time be securing the bronze medal in Los Angeles.

Australia had previously finished second in 2001 and in third place in 2000 and 2010 but had never before taken top honours in the Series.

The bronze medal finish in LA with a 21-7 victory over Samoa was enough to claim the Series title with 126 points, two ahead of South Africa in second position and four ahead of Fiji in third.

New Zealand beat Fiji 28-21 to take gold in a pulsating Los Angeles final, thanks to a late try from Moses Leo, converted by Kurt Baker.

Australia become the fifth country ever to win the series after New Zealand, South Africa, Fiji and Samoa. It is double success for Australia as the men’s Series victory follows the women’s domination of the 2022 Series, which finished in Toulouse, France earlier this year.

Australia captain Nick Malouf said: “I’m so proud and happy that we’ve made history. It’s a great day for Australian rugby. A huge squad performance from Dubai all the way through to here, this is the culmination of consistency and training hard every day.”

Australia head coach John Manenti said:  “It is quite surreal to be honest. It has been an amazing six months or so with the boys, we have had our ups and downs, but these kids have fought hard and they deserve this and it is something that they will remember for ever.

“This season we wanted to be consistent from day one and we didn’t get there every tournament, but in general this overall victory is all about the consistency the boys have shown.”

New Zealand’s Moses Leo was awarded HSBC Player of the Final in LA and said: “We had to dig deep, but the boys showed character and we did it.”

In one of the most closely contested Series title races in the history of the competition, which began in 1999-2000, South Africa were leading the standings going into the ninth and final event having got off to a flying start by winning the first four rounds of the Series.

However the Blitzboks were unable to qualify for the quarter finals in LA which opened the door for one of Australia, Argentina or Fiji to overtake them and claim the title.

South Africa will be looking to bounce back on home turf when they host Rugby World Cup Sevens 2022, which takes place in Cape Town from 9-11 September.

Following the decision for England, Scotland and Wales to combine as a unified Great Britain team in the 2023 Series, no team is relegated from the 2022 Series. Uruguay will join the 2023 Series as a core team following their victory at the World Rugby Sevens Challenger Series earlier in August.

The HSBC World Rugby Men’s Sevens Series 2022 Awards take place on Sunday evening to recognise and celebrate the outstanding players and teams who have lit up the 2022 Series.

Australia won the women’s Series which concluded in Toulouse, France in May. Australia were the dominant team throughout the 2022 Series, showing great consistency to win four gold, one silver and one bronze medals from the six rounds of the competition.

In a huge year for rugby sevens, all eyes now turn to South Africa for what promises to be a spectacular and record-breaking Rugby World Cup Sevens 2022 taking place in Cape Town on 9-11 September.

World Rugby Chief Executive Alan Gilpin who was in attendance in LA said: “Congratulations to Australia on making history by winning their first ever HSBC World Rugby Sevens Series title.

“We witnessed another spectacular and inspiring showcase of the best of rugby sevens this Series as the sport continues to grow and entertain fans and inspire new players around the globe.

“As we continue to move forward from an incredibly challenging period for international sport, I would like to pay tribute to all the players, teams, hosts, partners, volunteers and fans around the world who have worked so hard to deliver an outstanding Series in 2022.”

“The future of rugby sevens is incredibly exciting and we now look forward to what promises to be a record-breaking Rugby World Cup Sevens 2022 in Cape Town, beginning in just 12 days time.” – WORLD RUGBY