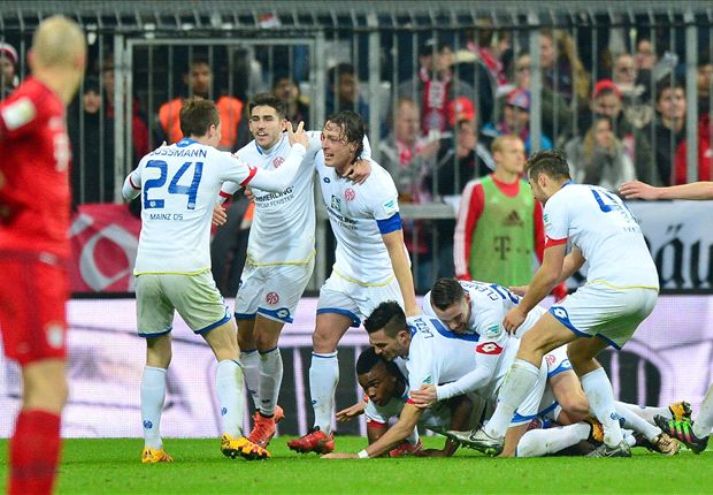 Pep Guardiola admits his Bayern Munich face a fight at Borussia Dortmund on Saturday in their battle to win a historic fourth Bundesliga title after Mainz’s upset victory in Bavaria.

Bayern’s shock 2-1 defeat both trimmed their lead over second-placed Dortmund to just five points and saw them lose their 100 percent home record for this season.

Dortmund host Bayern in a top-of-the-table clash in three days and Guardiola admitted his side has a fight on their hands.

But the Spaniard said Bayern simply were not good enough against Mainz as they failed to convert their mind-blowing 78 percent ball possession into victory.

“Our performance wasn’t good enough, but I am not sad,” said Guardiola, who is in his final season in Munich before coaching Manchester City next season.

Bayern have won the league at a canter for the last three years, setting a record in 2014 when they secured the title with seven games left.

But Guardiola says those days are gone.

“No other team has won the Bundesliga four times in a row,” he said.

“This Borussia Dortmund team is completely different to the last three years and we will have to fight until the last game.

“We have to think of the next game and today was a clear signal that it won’t be easy.

“We must fight until the last second.”

Mainz sealed only their second ever win in Munich when Colombia striker Jhon Cordoba came off the bench to hit the 86th-minute winner.

“We had our chances and then let them counter-attack. We shouldn’t have allowed that to happen,” fumed Bayern’s goal-scorer Arjen Robben.

Mainz took a shock lead at the Allianz Arena when Spanish winger Jairo fired home in the first-half with the Bayern defence well beaten.

Robben pulled a goal back for the Bavarians on 64 minutes before Cordoba netted only to be mobbed by his team-mates.

“We knew how we could win here with a strong defensive display and a good counter-attack,” said Mainz coach Martin Schmidt, who praised his side’s ‘outstanding display’. “It feels really good.”

“We and Bayern both know that things can now be a bit tight. We want to win the thing,” said Dortmund’s Germany defender Durm. – Agence France-Presse