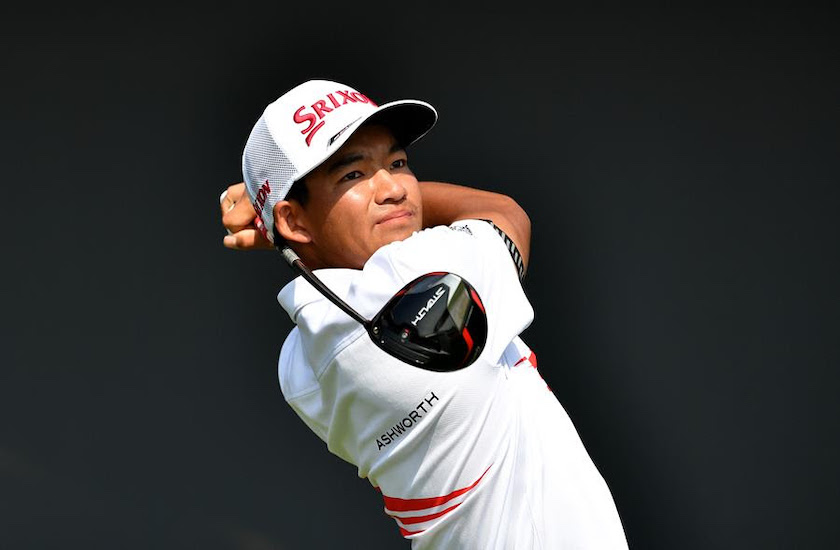 Kho, ranked 100th on the World Amateur Golf Ranking, sensationally took the lead in a professional event for the first time when he holed his third shot on the par-five ninth, which was his 18th, to join Itthipat at the top of the leaderboard.

A total of 59 players where unable to finish due to two weather delays earlier before play was abandoned due to fading light.

Indonesian amateur Almay Rayhan Yagutah impressively flew the flag for the host nation with a 67, along with Chinese-Taipei’s Chang Wei-lun.

“It was great,” said Kho, whose father Victor is caddying for him.

“I was really happy with the way I played. I stuck to my game plan. I managed to hit some good shots on my back nine.

“On nine I was out of position off the tee, but I managed to get it back in play. I had 93 yards for my approach, I hit it really nice, but I did not expect it to go in.”

Kho, who plays his college golf at the University of Notre Dame, hit the headlines last year when he finished second in the Asian Amateur Championship.

“I could see the lines on the greens, and my caddie did as well. And I like the course, I have played well here before.”

He played in two LIV Golf Invitational events this year, in London and Portland, and feels he is a better player for the experience.

“I played with the big names and learned so much. I have reset the things I work on now because of it,” he added.

“It’s my first time playing here, so I didn’t expect too much, just planned to stay on the fairway. Luckily, my tee shots were the best part of my game today,” said the Thai veteran, who won on the senior tour in Thailand in May in his hometown of Hua Hin.

“And, I made a great birdie on the first hole, that helped. I feel chilled this week, happy to see so many familiar faces.”

Chapchai, a four-time winner on the Tour, mirrored Prayad’s seven birdie bogey free performance. The 39 year old has not won on Asian Tour since 2014.

Unlike his three countryman ahead of him Tirawat did make a couple of bogeys but was happy to continue to play well after discovering some form in Thailand recently.

“I have been playing well on the All Thailand Golf Tour over past two weeks, a top-five and a top-10, so I am feeling good about this week,” he said.

“I got off to the perfect start, two birdies on first two holes. I like the course but it’s a little bit difficult for tee shots, but today that part of my game was okay.”

Korean Minkyu Kim, who won the Kolon Korea Open in June, was the leading player on the course at five under playing hole number 14.

India’s Gaganjeet Bhullar returned a 68; he is bidding to win the event for a record third time, following his successes in 2013 and 2016.

Indonesia’s Naraajie E. Ramadhanputra, winner of the OB Golf Invitational in June on the Asian Development Tour, came in with a 69, while his country’s leading player Rory Hie carded 70.