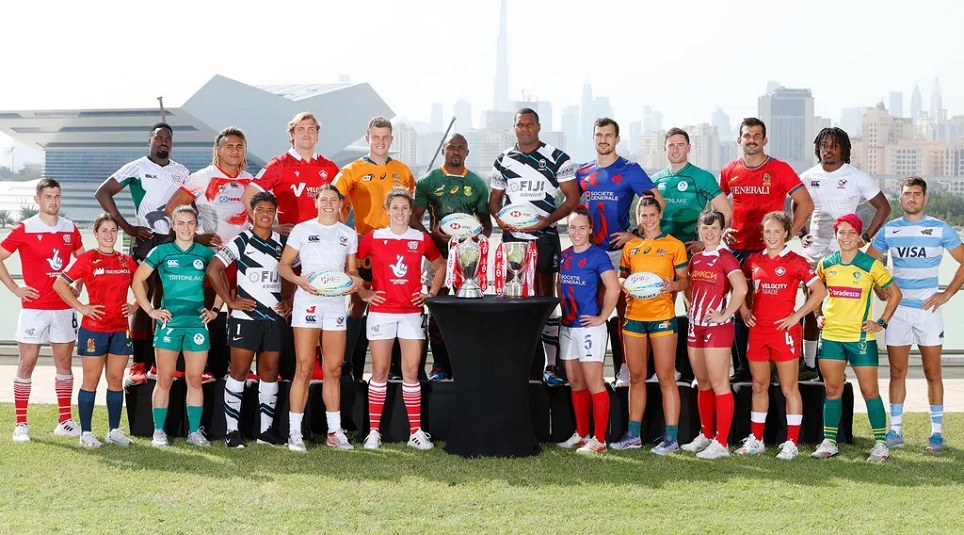 The action gets under way when Australia take on the USA at 08:48 local time (GMT+4) on Friday in women’s Pool A

The captains of the 12 men’s and ten women’s teams competing at the season opening Emirates Dubai 7s gathered on Wednesday as the HSBC World Rugby Sevens Series 2022 returns to action on Friday at the Sevens Stadium in Dubai.

Matches in Dubai will be played across two pitches and will get under way at 08:48am local time (GMT+4) on Friday 26 November with Australia v USA in a women’s Pool A match.

Following two full days of action-packed, high octane rugby sevens the women’s final will take place at 18:56 on Saturday 27 November, followed by the men’s final at 19:26 (all times local).

The men’s competition in Dubai sees the 12 teams divided into three pools of four teams, replicating the Olympic competition format.

In Pool A Fiji, fresh from retaining their Olympic title in Tokyo, will take on Australia, Canada and France.

Fiji captain Josua Vakurunabili said: “We are excited to be here. It’s a new beginning with some new faces in the Fiji team. We look forward to the fans coming back next weekend to enjoy the show.”

Pool B sees Olympic bronze medallists Argentina play Kenya, Spain and the USA. Kenya arrive in Dubai on good form after reaching the medal podium in both 2021 Series events, with silver in Vancouver and bronze in Edmonton. USA were beaten finalists in Dubai in 2019, when they finished the Series as runners-up.

Argentina Captain Santiago Alvarez said: “We are very excited for Dubai. We have been waiting for this season since the pandemic so we are very happy to be here. We did a good job to win a medal in Tokyo, we worked very hard for it, but it is in the past and we now have to think about Dubai and the future. We have some new players and we are working hard to put on a good performance.”

In pool C the 2021 Series Champions South Africa will take on Ireland, Great Britain and Japan, who were promoted as HSBC World Rugby Challenger Series champions in 2020. South Africa enter in confident mood following their perfect win record during the pair of HSBC Canada Sevens events in September.

South Africa Captain Siviwe Soyizwapi said: “When the Series calendar came out, to see such a busy schedule again was really exciting for us and we got straight down to work to prepare for it. The excitement level is high and we are really looking forward to it.

Dubai is a great spot and we have done really well here over the years with good success. It’s great weather, similar to Cape Town and has really great facilities and stadium so we really love coming to Dubai. We can definitely take confidence from our recent results in Canada and it was really good for some younger guys to come into the squad and get experience at that level.”

In the women’s event the ten teams are divided into two pools of five teams with each team playing each other in the pool. The pool placings will decide the classification matches, with no quarter or semi-finals, meaning the teams who top their respective pools will contest the gold medal final.

Pool A sees Olympic silver medallists France face Rio 2016 Olympic gold medallists Australia, who were Series runners-up in 2020. The USA, Brazil and Spain complete the line-up and the American’s were bronze medallists the last time Dubai hosted the Series in 2020.

New France captain Jade Ulutule said: “We were really happy after Tokyo, winning the silver medal was really good and we worked really hard for it for five years. We are looking to continue to progress and hope to win an event on the World Series and prepare well for the World Cup next year.

“We have been waiting for two years to play on the World Series again so we are really excited to be in Dubai. This is my first time as captain after Fanny Horta retired following Tokyo and it is an honour to be captain for this tournament.”

Australia captain Demi Hayes said : “We’re super excited to be here. Having not played on the Series for nearly two years, kicking off in Dubai is really exciting. We have a really new team with a lot of opportunities for the young girls. It’s a massive year and this is our first stepping stone towards the tournaments at the end of the season, and Paris 2024 will come around really quickly so we have to start hard here in Dubai.”

Great Britain captain Abbie Brown said: “We can’t wait. I love Dubai, it’s my favourite tournament and we are all  buzzing about having the fans back next week. We’re getting acclimatised and keeping hydrated in the heat out here. It’s mad how quickly it’s moved on from the Olympics. We’ve got the Commonwealth Games and a World Cup in September so it’s a super exciting year ahead with all the Series stops too.”

New Zealand’s men’s and women’s teams, who won the respective Series titles in 2020, and Samoa’s men’s team are unable to participate in Dubai due to the challenges of the Covid-19 travel logistics.

Meanwhile Great Britain will participate in the opening two rounds of the Series in Dubai, as part of the standing agreement to play the calendar year 2021, before reverting to compete as national unions for the remainder of the 2022 Series, with England, Scotland and Wales participating in the men’s Series and England in the women’s series.

Dubai is hosting the opening two rounds of the 2022 Series over consecutive weekends with the first played behind closed doors and the second, on 3-4 December, open to the public with a large, noisy and enthusiastic crowd expected to fill the Sevens Stadium and bring energy and excitement to the stands.

Tickets for the Emirates Dubai 7s on 3-4 December are available and further information can be found at https://dubairugby7s.com/tickets/.

The 2022 Series begins as the sport looks to capitalise on a highly successful and impactful Olympic Games played in front of a huge global television audience, which generated more than 22 million video views and over 100 million social media impressions across World Rugby’s digital platforms.