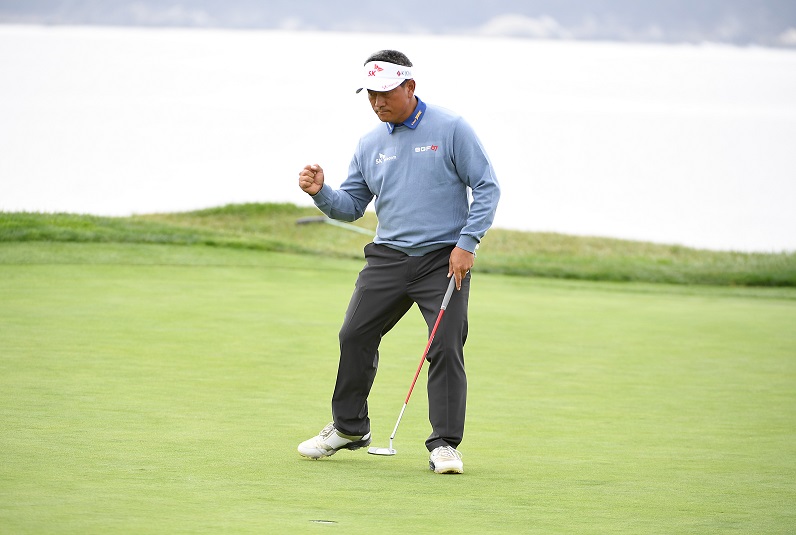 K.J. Choi secured his first PGA TOUR Champions title after cruising to a two-stroke victory over Bernhard Langer and Alex Cejka at the 2021 PURE Insurance Championship in Pebble Beach, California on Sunday.

A week after losing in a playoff to Darren Clarke at the Sanford International, the Korean legend carded a final round of 4-under 68 to triumph at the iconic venue for the first time in the over-50s circuit. He began the day with a two-stroke advantage and sealed his victory with five birdies against a lone bogey.

The 51-year-old became only the third Asian winner on PGA TOUR Champions after Japan’s Isao Aoki and Kohki Idoki, and the first Korean champion. An eight-time PGA TOUR winner, Choi’s last success on U.S. soil was at the 2011 PLAYERS Championship.

“Last win was 2011 PLAYERS and I wanted to get back to winning. Pebble Beach is special and my dream is winning here. Every tournament, I want to do it and win, and this week is so exciting,” said Choi, who moves from No. 31 to No. 21 in the Charles Schwab Cup standings.

“Winning is very difficult, and the first win is exciting. My first victory in America on the PGA TOUR was in 2002. First is always harder and hopefully the second and third will become easier.”

Leading into the final day, Choi began the day nicely with a birdie on the second before reeling in four successive birdies from the fifth to eighth holes to hold off his challengers. His long bogey of the card – his first in 39 holes – came on the 14th hole. Langer, a 41-time winner on PGA TOUR Champions, and Cejka also signed for 68s to share second place.

Choi said he is relishing the opportunity of competing on PGA TOUR Champions. “I’m working hard and I’ve kept patient. I’m keeping my physical exercise and worked on my body. Any win is very special. There are legends players here who have kept in shape and have strong minds. They can still play and scoring is always good. I’m happy to join the Champions,” said Choi.