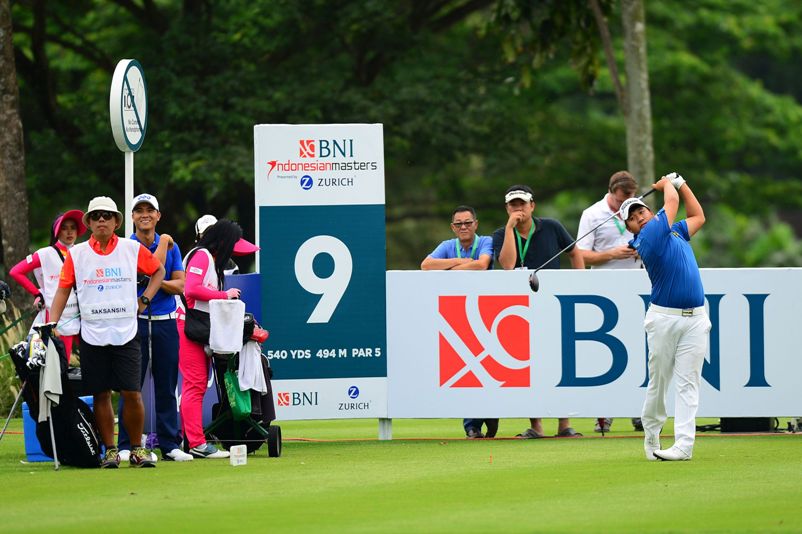 Baby-faced Poom Saksansin of Thailand fired a flawless seven-under-par 65 to seize the third round lead at the BNI Indonesian Masters presented by Zurich on Saturday.

The 23-year-old Poom made a surprise charge up the leaderboard to lead by two shots on 13-under-par 203 from Japan’s Masahiro Kawamura (68) and Kalem Richardson of Australia (69) at the US$750,000 Asian Tour event.

Thongchai Jaidee of Thailand, a three-time Asian Tour number one, birdied the closing two holes for a 69 to tie in fourth place on 206 alongside Marcus Fraser (70) of Australia, who needs a victory at the Royale Jakarta Golf Club to overtake Scott Hend on the Order of Merit.

Poom will enter the final round as the leader for only the second time in his career on the Asian Tour after leading in the 2014 Queen’s Cup in Thailand before finishing second.

With numerous players breathing down his neck, Poom hopes to put his experience of playing on the Asian Development Tour (ADT) to good use as he chases for a first Asian Tour victory.

“I wanted to shoot under-par and not make any trouble. On the first hole I got into trouble but I saved par from 15 feet. I felt lucky after that. I only tried to make par but if I had a birdie chance, I would go for it and it worked,” said Poom, a one-time winner on the ADT.

“After I was five-under, I felt like it would be my day so I started playing more aggressively. This is my second time in the last group on the Asian Tour. I will try not to be nervous on the final day. I just want to give myself a chance on the final day,” said the Thai.

After finishing third in the event last year, Richardson charged into contention again with two birdies and one eagle against one bogey. After almost quitting the game earlier this year, the Australian is now focussed on winning his first Asian Tour title.

“Golf is the hardest game in the world really. It is a tough lifestyle but it is great to be playing golf for a living. I tried to remember that and I’m glad to be here playing golf. I feel like I’m playing good now.

“It will be massive if I do win. It will be a big day tomorrow. I’ll just focus on each shot and not get carried away,” said Richardson.

The 23-year-old Kawamura, who won his first Asian Tour title in 2013, traded six birdies against two bogeys as he heads into the final 18 holes, two shots back of Poom.

“I am happy with where I stand right now. I am definitely aiming for a win tomorrow. I look forward to playing in the final group again. I will keep things the same tomorrow. Nothing changes,” said Kawamura.

Thongchai double bogeyed the fourth hole but steadied ship with one birdie and one eagle before the turn. He added another birdie on hole 10 and slipped back with a bogey on 15 before charging home with two closing birdies.

“I played really well on the last two holes. I hit two good irons there. I know the conditions are tough but finishing well on the last few holes is key here. I’m three shots behind so I have a chance tomorrow,” said Thongchai, who is aiming for a 14th Asian Tour title.

For more information on the BNI Indonesian Masters presented by Zurich, visit http://www.indonesianmasters.co.id/

Scores after round 3 of the BNI Indonesian Masters being played at the par 72, 7340 Yards Royale Jakarta GC course (am – denotes amateur):