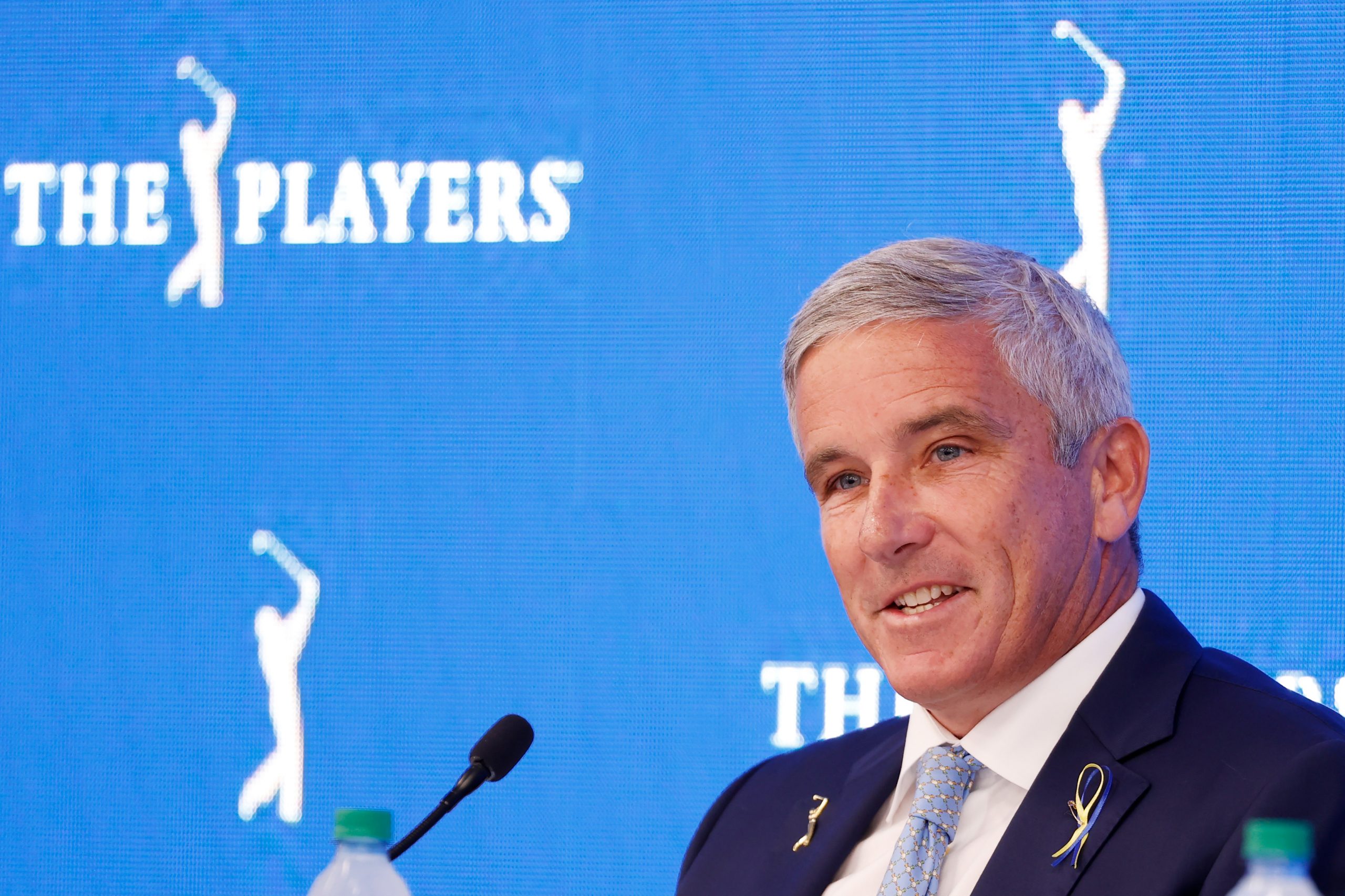 Ponte Vedra Beach, Florida: New media rights that include a comprehensive global package. A baker’s dozen of new title sponsor agreements. Galleries returning, with full stands to follow. And at the heart of it – an exciting mix of young stars and highly credentialed veterans committed to competing on a weekly basis on the world’s biggest golf stage.

No wonder Commissioner Jay Monahan is bullish on the future of the PGA TOUR.

“We’re going to grow faster over the next 10 years than we have at any point in our history,” Monahan said during his annual State of the TOUR address. “Our players have spoken. They are 100 percent behind the PGA TOUR. They have expressed their loyalty and commitment in their own unique ways.”

With the TOUR’s signature event, THE PLAYERS Championship, scheduled to tee off Thursday at TPC Sawgrass, Monahan addressed several topics concerning his organization as well as the latest developments concerning players, including the discussion of a potential rival league and Phil Mickelson’s comments on the matter.

Describing it as “all of the news, discourse and conjecture lately about the world of professional golf,” Monahan was adamant that the PGA TOUR is terrifically placed as the world’s premier golf league – and will continue to stay that way.

“The PGA TOUR is moving on,” Monahan said. “We have too much momentum and too much to accomplish to be consistently distracted by rumors of other golf leagues and their attempts to disrupt our players, our partners, and most importantly our fans from enjoying the TOUR and the game we all love so much.

“I am grateful for the strong support our top players have shown recently and publicly, and I’m extremely proud that we’ve turned the conversation around to focus on what we do best: Delivering world-class golf tournaments with the best players to the best fans, all while positively impacting the communities in which we play. We are and we always will be focused on legacy, not leverage.”

That legacy – and its continued growth – is certainly in good hands.

All are in attendance this week as part of the annual strongest field in golf.

“It’s a reflection just on the system at work,” Monahan said. “I mean, these young players are coming from all over the world at a young age, having success on the Korn Ferry Tour and the PGA TOUR at a very early age. That depth of talent – you talk about the top 5, you extend it past the top 5 into the top 30 and the top 50 – the athleticism, the youth, the preparedness, the system is working, and it’s arguably the most exciting time in the history of the PGA TOUR for that reason.”

Of those top 10 players under 30, three are international stars – Rahm is from Spain, Hovland hails from Norway and Smith comes from Australia. And thanks to the TOUR’s own international growth, fans across the globe will get to see them perform this week, as THE PLAYERS is set to be broadcast in more than 200 countries and territories and in 27 languages.

the second time on TOUR at this year’s The Genesis Invitational, going wire to wire.

The significance of having a Latin America golfer win in Los Angeles, a city with one of the largest populations of Latinos in the United States, is not lost on Monahan. This year is the 10th anniversary of the debut of PGA TOUR Latinoamerica.

“The investments that we’ve made with PGA TOUR Latinoamerica, with the success that we’ve seen with great Latin American players coming on to the PGA TOUR, has had a material effect on consumption, interest in our sport, and it’s happening right now,” Monahan said. “You look at all of our channels, the impact of Joaquin’s win was significant, and you’re talking about the fastest growing segment of our population through 2050.

“And we’ve got great players, and I think it’s going to not only serve this organization, but as importantly, it’s going to serve the game and create tremendous energy. Joaquin is one of many players that are going to help inspire future generations to keep playing this game.”

In addition to growing the game in Latin America, the PGA TOUR also expects its strategic alliance with the DP World Tour will make an impact overseas. Monahan was asked about potential discussion of Valderrama, the heralded Spanish course, hosting a shared event between the PGA TOUR and the DP World Tour, which is led by CEO Keith Pelley and Deputy CEO Guy Kinnings.

“Since we’ve acquired 15% of European Tour Productions, we’ve been focused on supporting the media side of the business,” Monahan said. “There’s tremendous energy on that front with DP World Tour. You’ve seen us contribute on the commercial side a number of partners, most recently Horizon stepping up as title sponsor of the Irish Open. There is just tremendous momentum behind the DP World Tour.

“As we work more closely together … the possibilities of what we can do as a TOUR and then what we can do together are really, really exciting. So I can’t comment to the specifics of what’s going to happen at Valderrama. Obviously a great championship golf course, but I know Keith, Guy and the team have nothing but great aspirations for what we continue to do there.”

Of course, any global discussion must currently be framed by Russia’s invasion of Ukraine.

Given the penchant of the PGA TOUR and its golfers to commit time and money to charitable efforts – the TOUR’s charitable efforts resulted in $161 million in 2021, and Monahan hopes to reach $200 million this season – it’s no surprise that all parties are supporting the Golfers for Ukraine effort, which will collect donations for UNICEF, the United Nations agency responsible for providing humanitarian and development aid to children in the crisis.

In addition, ribbons in the colors of the Ukrainian flag are being made available to players, caddies and staff. Financial donations can be made to golfersforukraine.com.

“The PGA TOUR is proud to join this industry-wise initiative to provide financial support and awareness for the crisis,” Monahan said. “… The game of golf has an incredible way of rallying around causes that really matter, and this is one.”

Added Monahan: “Our hearts go out to the people of Ukraine and those caught in the crosshairs of the conflict. We hope for an end to the senseless violence and a peaceful resolution.”