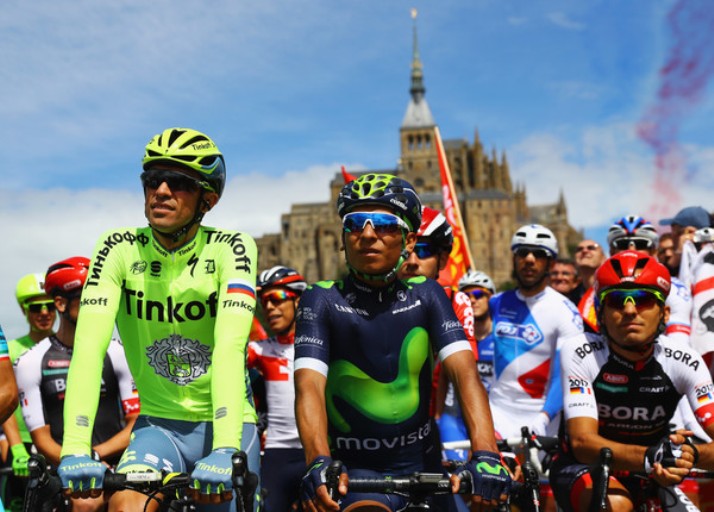 Two-time former winner Alberto Contador said he was still trying to recover from his injuries after losing more time in the fifth stage of the Tour de France.

The 33-year-old Spaniard crashed on each of the opening two stages, injuring his right side, and has been struggling to keep up with the pace of his rivals for overall victory in Paris on July 24.

He lost 48 seconds on Sunday’s second stage in an uphill finish and another 33 seconds on Wednesday when the road ramped up again at the end of the 216km ride from Limoges to Le Lioran in the Massif Central.

“It was a very tough day, very difficult. We were all tired, the team tried to help me but I need to find new strength,” complained the Tinkoff leader.

“I found a bit but I paid for it at the end.

“Of course two crashes in the first two days hurt, it still hurts. I knew today (Wednesday) would be very difficult.

“The important thing for me is to recover and not lose heart.

“I haven’t lost morale, the fans’ support on the roads has been amazing.

“I’ll give my maximum and we’ll see what I can do.”

On the first difficulty of the day, the second category Pas de Peyrol climb, the Movistar team of Nairo Quintana, second to Chris Froome in 2013 and last year, cranked up the pace.

Contador held on but it was when young Frenchman Romain Bardet put in a searing burst in the final 3km that the Spaniard finally lost touch with the rest of a leading peloton whittled down to less than 30 riders.

According to Richie Porte, who is behind Contador in the overall standings after a puncture cost him 1:45 on Sunday, the accelerations were an attempt to make the Spaniard pay.

“The whispers were that he (Contador) wasn’t good and the guys smelt blood and went for him,” said the Australian.

Froome had predicted on Tuesday that some time gaps could appear between the top GC (general classification) contenders but without any major losses being suffered.

“For us it was about staying up front and not losing any time on those GC guys,” said the Team Sky leader.

“We’re happy to stay out of trouble and it’s one more day down.”

The first big mountain is the first category Col d’Aspin — 12km long at an average gradient of 6/5% — on Friday and that’s where the 31-year-old Britain believes the race proper will start.

“The big GC days are still to come. Today (Wednesday) was one of those days where, yes it was selective, but it wasn’t necessarily going to be a big showdown between the contenders themselves,” he said.

He is third overall at 5:13 behind Van Avermaet, who is likely to lose the jersey on Friday.

If Valverde stays with the likes of Froome and Quintana, he could find himself in yellow at the end of the day.

“You can see the mountains have begun,” he said on Twitter of Wednesday’s lumpy stage finale.

“Long and tough day. The whole team was brilliant in this #yellowdream.” – Agence France-Presse