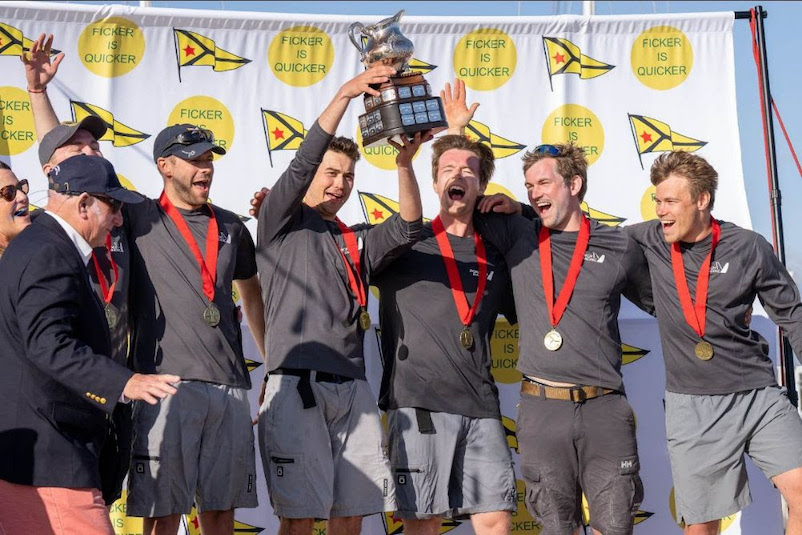 Kjaer had dominated the Ficker Cup round robin series, with only one loss – to Borch – in the final match. But Borch had come out swinging as well and finished the round robins 10 – 4.

The Dueling Danes are no strangers: Borch hails from Roskilde Sailing Club and Kjaer from the Royal Danish Yacht Club in Copenhagen, less than an hour apart. The teams have been amiable sparring partners for years and were frequently seen huddled around the same breakfast table at LBYC this week.

Kjaer had won the 2021 Ficker Cup and qualified for Congressional Cup, finishing mid-fleet. But for Borch it remained elusive. “Congressional Cup has been one of our all-time goals, for many years, and if Ficker is how we get there, then that’s what we are here to do.” 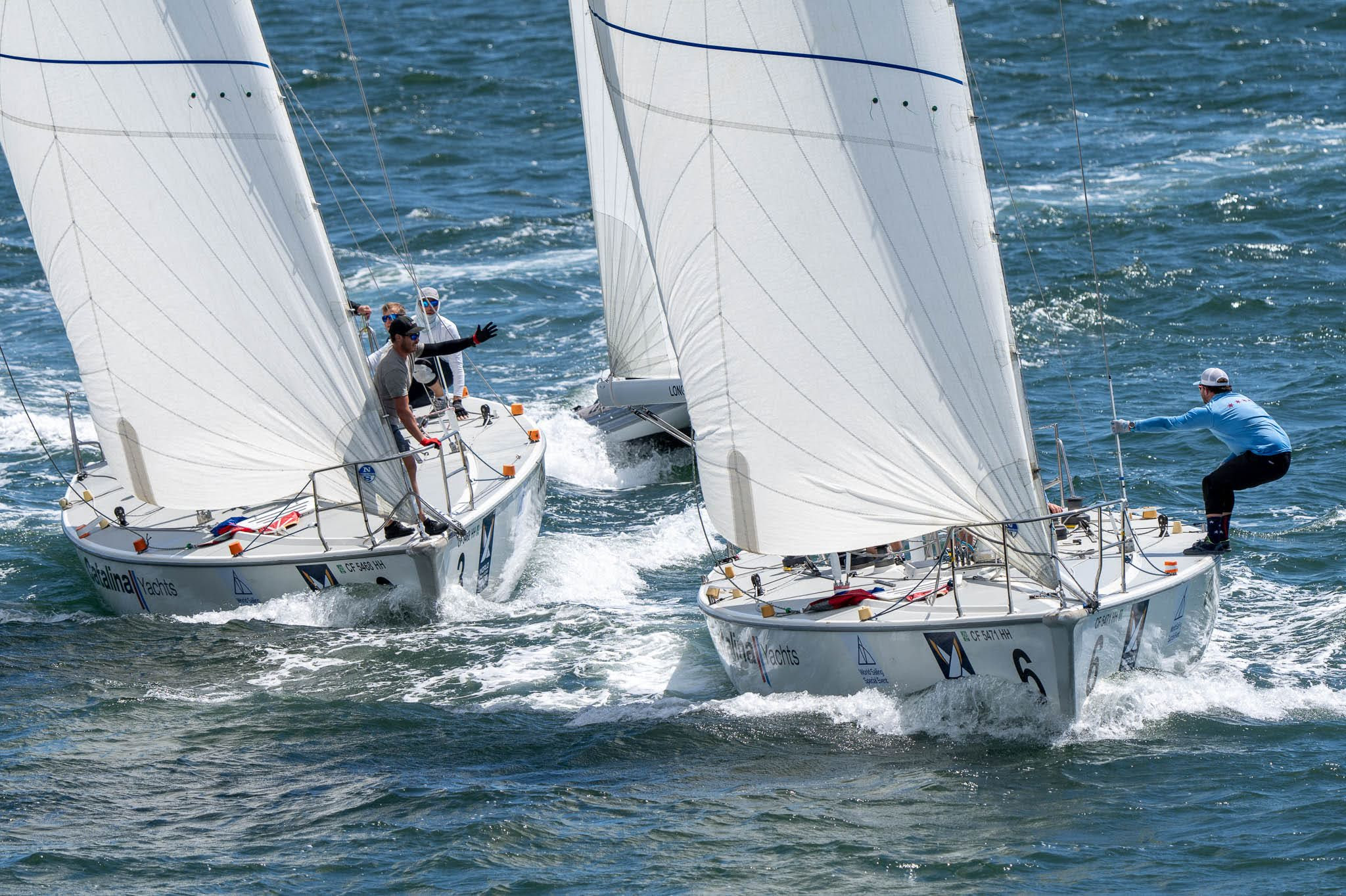 Borch admitted the competition was formidable. “This is the first time here for me and the guys on the boat. So we were hoping for a steep learning curve, compared to some of the other teams who’ve been here a few times and have a lot more hours driving the boat. But our team has been together for some time and we know each other very well. That helps when we get into a new boat and find out how to get good boat speed.”

Paired off against Perry in the semifinals, he noted, “Dave Perry’s fast, especially in the light winds, and we haven’t quite found the speed in the light air yet: so we needed to keep him downwind at the start and stay on top of him for the whole race.”

But light air wouldn’t be a problem today. Although rain threatened early Saturday morning, the skies cleared and the wind turned on. Principal Race Officer Randy Beers and his Race Committee had commenced the semi-finals Friday afternoon; with Borch winning over Perry, and Kjaer over Holz. But increasing winds in the later afternoon suspended the remaining semifinal races until today; when Kjaer and Borch swiftly dispatched their rivals. 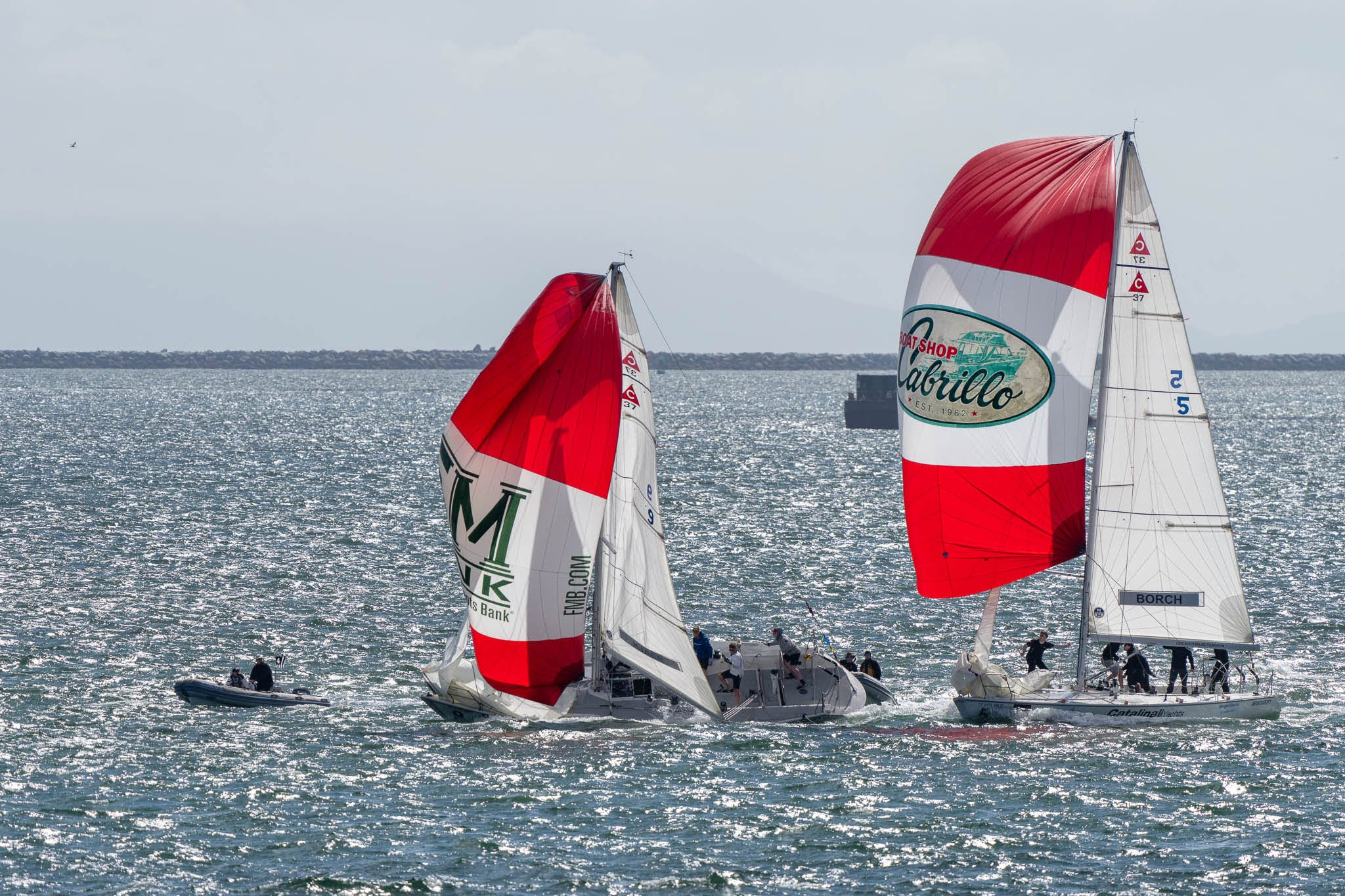 For the Petit Finals stage, for third and fourth places, a solid southwesterly breeze had filled in. Perry favored the right side of the course and extended over Holz to win the first match. But it was Holz who went right in the second flight, after a feisty start with the master of match racing, Perry. Once again right paid off, this time to Holz’ benefit, and he crossed the finish line with Perry just two boat lengths astern. It came down to a final sudden death match. Trouble at the downwind gate put Perry behind, and Holz stretched his lead to win the match, and take third place in the 2022 Ficker Cup.

Meanwhile Kjaer and Borch had traded places in the finals: with Kjaer taking the first match handsomely, after a stalled hoist at the top mark by Borch; and Borch rebounding to take the second match. The teams looked smart and well-paired, the identical Danish flags flapping off their backstays in a stiff breeze. The trophy would go to the first team to score three points, so the racing continued as the wind built and clocked further right. In the third match, a tactical error put Kjaer at the wrong windward mark, and he surrendered that race.

PRO Beers called for the teams to change down the jibs. A full-on westerly was sweeping the Congressional Cup racecourse; the flat water now strewn with chop and whitecaps. After another stirring pre-start, the teams advanced up the course, Kjaer covering Borch on every tack. Borch was just two boat lengths astern at the top mark, when Kjaer rounded-up and lost a spinsheet. Borch took his opportunity to escape, to win the final match and Ficker Cup honors.

At the prizegiving at LBYC, the late Bill Ficker’s daughter Deon Macdonald presented the esteemed Ficker Cup trophy to the team, while Congressional Cup Chair Lisa Meier bestowed invitations to both Borch and Kjaer.

In receiving his third-place accolades, Holz gave a shout-out to Perry, who has coached his crew and several of the other domestic teams, and to his team. In addition to third prize, Holz has a prize awaiting him in Chicago: next week he will marry his sweetheart Kelsey. 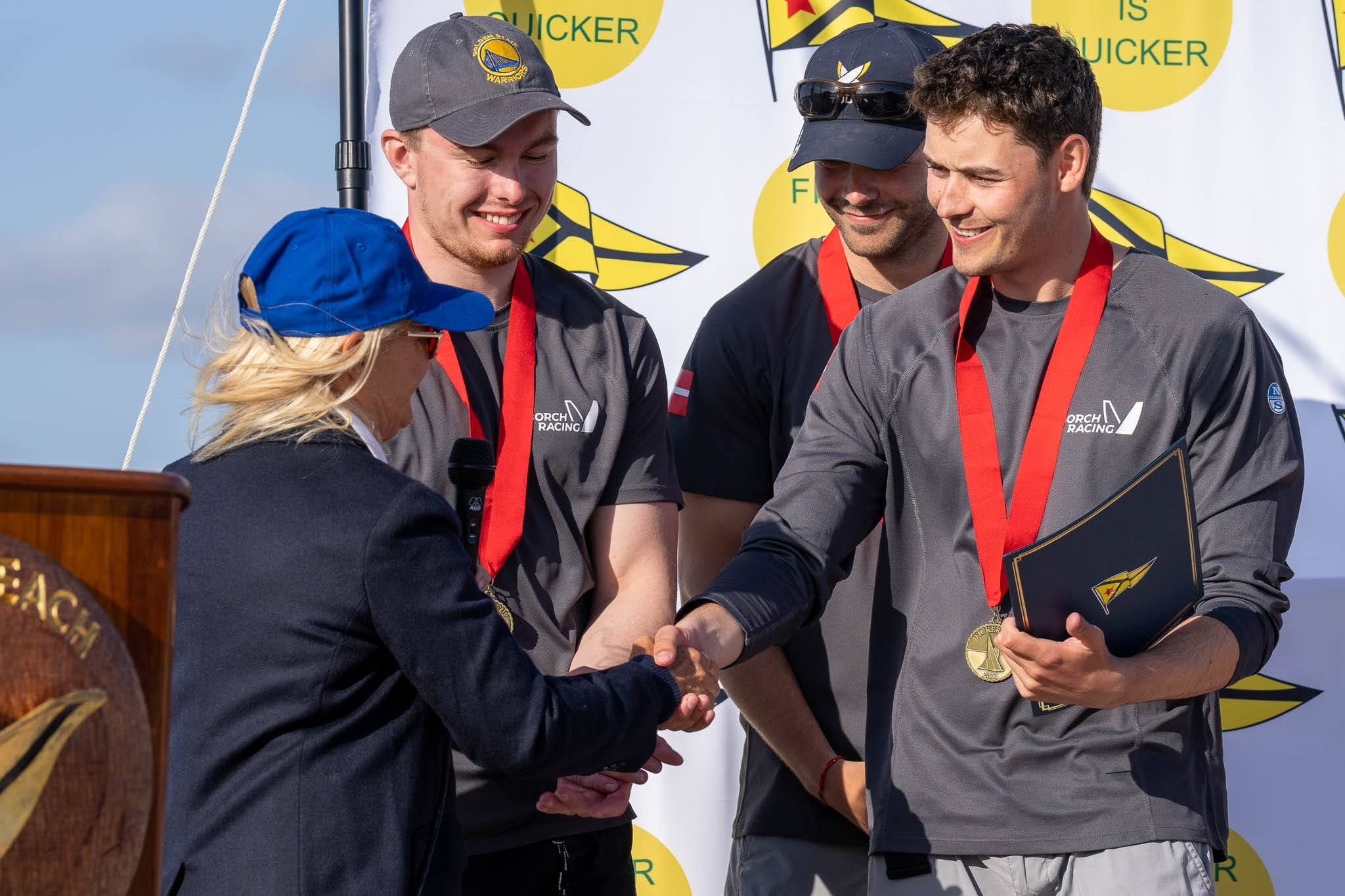 Jeppe Borch being presented with his invitation to the 57th Congressional Cup (Photo: Ian Roman/WMRT)

Congressional Cup is one of the pre-eminent yacht racing events in the world. A select Grade 1 Event it is also a flagship of the World Match Racing Tour and organized by LBYC.
Racing takes place at the Congressional Cup stadium, a designated racecourse adjacent the Belmont Veterans Memorial Pier. Spectators are invited to watch the action at 11:30AM daily. For full details on the Congressional Cup go to www.thecongressionalcup.com