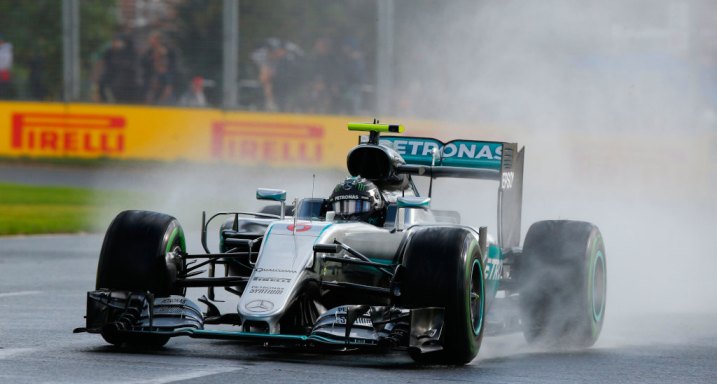 Hamilton made only a cameo appearance in the rain-hit second session but still reeled off the fastest lap, in an ominous sign for his rivals at the season-opener.

Hamilton, who also set the pace in first practice, clocked a best lap time of one minute 38.841 seconds in the slippery afternoon track conditions to prove his early superiority ahead of Saturday’s qualifying.

But Rosberg, his closest rival last season, struck trouble in second practice when he lost control of the rear end of his Mercedes, aquaplaned and hit the wall at turn seven, damaging the front wing of his car.

The German was told over the team radio, “Pull over please Nico, stop the car” before he stopped on the grass at turn 13 to save any further damage.

The Mercedes team confirmed that Rosberg’s car had suffered damage to its new-spec nose.

With the rain upsetting teams’ plans right at the start of the new season, Hamilton took up where he left off in last year’s championship season of 10 wins out of the 19 races.

The Briton stayed in the team garage until late in the second session before uncorking the fastest time on his first flying lap.

That was enough to hold a 0.467sec edge over Germany’s Nico Hulkenberg in a Force India and Ferrari’s Kimi Raikkonen as rain made for treacherous driving conditions.

“The car performed well and although we didn’t get a huge number of laps in, they were still quite constructive sessions,” Hamilton said.

“I was lucky to get a couple of dry laps to get a tiny feeling for what the balance is like around here, which was down to some good work from the team to time my runs right.

“Hopefully, it’ll be a dry day tomorrow so we can get plenty of laps in and give something back to the fans who have braved the weather today.”

Rosberg rued his spin which presented with his team with some extra work overnight on his car.

“That wasn’t a good start to the weekend for me. It was very wet out there, which made it tricky,” he said.

“It’s a shame that I lost the car in P2. I just applied a little too much throttle through turn seven, spun round and touched the wall.

“My front wing was quite damaged, so unfortunately the boys will have some extra work to do tonight.”

Ferrari’s Sebastian Vettel, who didn’t register a time in first practice, was eighth quickest in the second session, but 1.920secs slower than Hamilton.

Both Vettel and Raikkonen did only seven laps in one single run on intermediate tyres.

“For sure these conditions are not ideal, but in the end what can we do? It is the same for everyone,” Vettel said.

“Still, I don’t think that the day was completely lost. It was good to get at least some laps and to feel the car, but in terms of preparation for the weekend and the race there was not too much to learn.”

Rio Haryanto, Indonesia’s first-ever F1 racer who had only four weeks preparation in his Manor Racing car, got in 22 laps in second practice and finished in 14th place with 1:44.304.