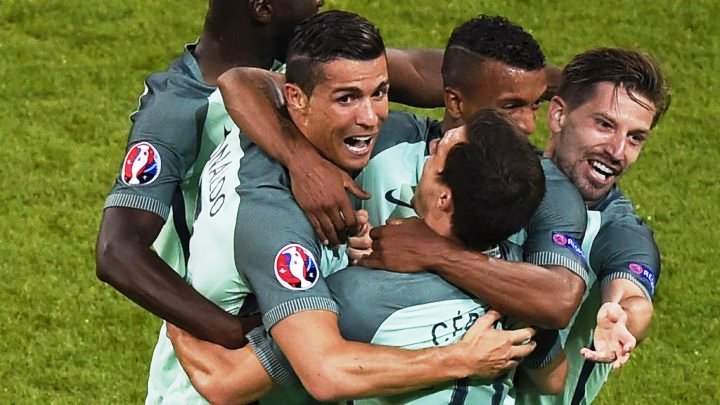 Ronaldo brilliantly rose above the Wales’ defence to score his country’s first goal in the 2-0 win in front of 50,000 fans in the Stade de Lyon on Wednesday.

Nani deflected the Portugal hero’s shot for the decisive second goal that saw their country into Sunday’s final against tournament hosts France or world champions Germany.

Ronaldo and Bale had not spoken in the tournament before Wednesday’s match. With victory sealed, Ronaldo embraced his club teammate at the end.

“The team did a marvellous job to reach the final. I hope on Sunday you’ll see me crying with joy,” said Ronaldo, who as a 19-year-old wept on the pitch after Portugal lost 1-0 to Greece as hosts of the Euro 2004 final.

“I have always dreamed of winning for Portugal — I hope it is our time now.

“I am very confident. I deserve it, Portugal deserves it, all the Portugese people deserve it.”

Bale paid tribute to the three-time world player of the year with whom he has not always had an easy relationship in Madrid.

“He’s a natural goal-scorer and he scored yet again,” said Bale.

“We’re obviously massively disappointed. We’ve got to be proud of ourselves first and foremost.”

“We gave everything, we have no regrets,” he added, predicting Wales would be a force in qualifying for the 2018 World Cup in Russia.

“We’ve given everything, on the pitch, off the pitch,” Bale said of Wales stunning campaign in their first major tournament since 1958 when it took a Pele goal to beat them in the World Cup quarter final.

British media called the 31-year-old Ronaldo the “Dragon-slayer” as they recounted how the sharpshooter had stunned Welsh fans brandishing flags and t-shirts with the national red dragon symbol.

Bale had the better of the first half showing off his pace and power to threaten the Portuguese goal.

But five minutes into the second period, Raphael Guerreiro curled a cross to the back post and Ronaldo leapt above James Chester to head past Wales goalkeeper Wayne Hennessey.

Three minutes later, Nani, who has just completed a move from Turkey’s Fenerbahce to Valencia in Spain, instinctively pushed out his leg to deflect a Ronaldo shot past Hennessy.

Tens of thousands of fans celebrated in Lisbon’s Praca do Comercio. Heads dropped in the Millennium Stadium in Cardiff.

Ronaldo said he had congratulated Bale on Wales’ “amazing run”.

“They were the revelation team. I wished him good luck and as for the rest (of the conversation) I’d rather not say.”

Ronaldo is desperate to win on Sunday at the Stade de France in what could be his last big chance of winning a Euro or world title.

Portugal did not win a match in regulation 90 minutes before the semi-final.

“Maybe it didn’t start as we wanted, but this is not a 100 metre dash, it is a marathon,” said the captain.

Portugal coach Fernando Santos, 61, said the final will be the highlight of his long and much-travelled career.

Santos said he would be closely analysing Thursday’s game between France and Germany for potential weaknesses.

“It is my country, my flag, my fatherland, so from a personal point of view it is very important for me.

“Two very strong teams face off tomorrow. I will watch the game very attentively to analyse our opponent.”

Germany were boosted ahead of the Marseille game by the news that captain Bastian Schweinsteiger had recovered from injury and would start the match.

But they will still be missing centre-back Mats Hummels through suspension and striker Mario Gomez and midfielder Sami Khedira through injury.

France, like Portugal, have become stronger as the tournament has progressed and hammered Iceland 5-2 in the quarter-final while Germany needed a penalty shootout to beat Italy.

There is an air of revenge for France, whose fans have never forgotten a 1982 defeat in a World Cup semi-final when Patrick Battiston suffered serious injuries.

French coach Didier Deschamps wants a win to end a run of three defeats in major competitions — including 1982 — against their neighbours and rivals.

“We can’t change past history, but we’ve got our own page to write,” said Deschamps. “We’re facing the best team in the world, but the lads have to believe.” – Agence France-Presse