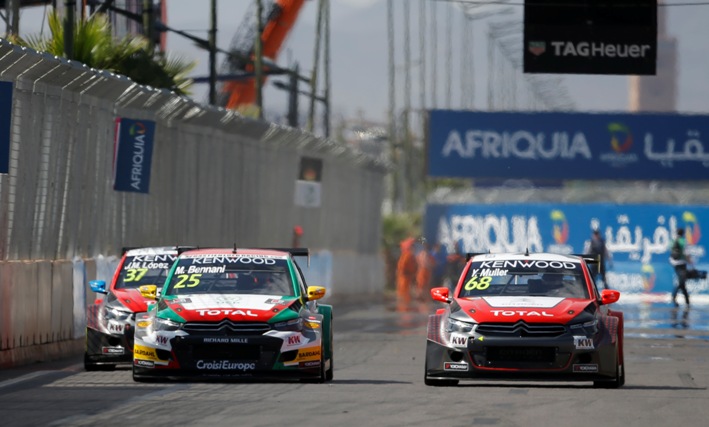 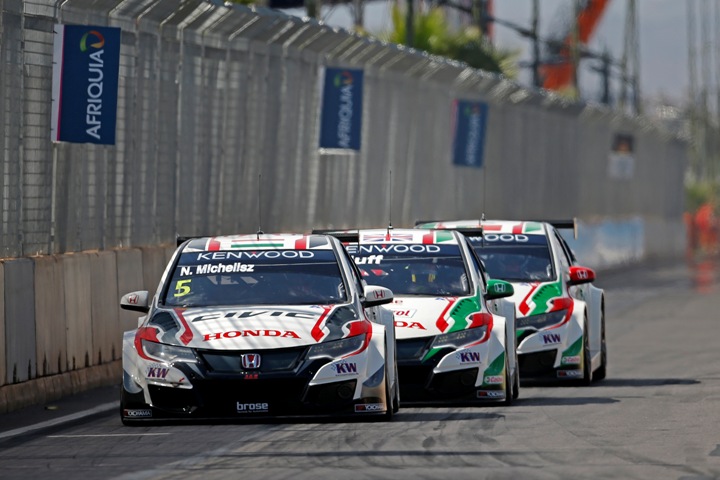 Citroën has claimed the honours in another dramatic Manufacturers Against the Clock contest at FIA WTCC AFRIQUIA Race of Morocco this afternoon.

After LADA’s Gabriele Tarquini, Hugo Valente and Nicky Catsburg were first to set a time in the Tour de France-inspired team time trial competition, Honda was 1.9 seconds quicker going into the final sector of two laps around the revamped Circuit Moulay El Hassan in Marrakech.

However, after contact with one of the walls lining the 2.971-kilometre track, Norbert Michelisz damaged his Civic WTCC and fell to the back of the Honda pack behind Rob Huff and Tiago Monteiro, crossing the finish line two seconds down on LADA’s time. That would leave Honda finishing third, just after it had locked out the top three places in qualifying.

Citroën followed, with José María López dropping to the back of its queue behind Yvan Muller and Mehdi Bennani after suffering splitter damage in qualifying. Despite that, Citroën lapped 1.004s quicker than LADA to claim its third MAC3 win and a home triumph for Bennani.

“We had a technical issue with the car of Pechito [López] and we had to change our strategy so in the end it was better than expected,” said Matton. “We were a bit lucky with the problem of Honda but at the end we have the 10 points and that’s the most important thing. Since the beginning of the season something different has happened in MAC3 and that’s creating the interest in MAC3.”

Of his costly moment during Honda’s run, Michelisz said: “It’s easy-flat on this corner but I was surprised I was not able to do it flat on the second lap. I did not expect this amount of understeer and driving with 160-170kph towards the wall I had to back off. But it was too late and I brushed the wall so I am sorry to the team.”

WTCC MAC3 is timed by the WTCC’s Official Timing Partner Tag Heuer and awards up to 10 points for the Manufacturers’ championship.