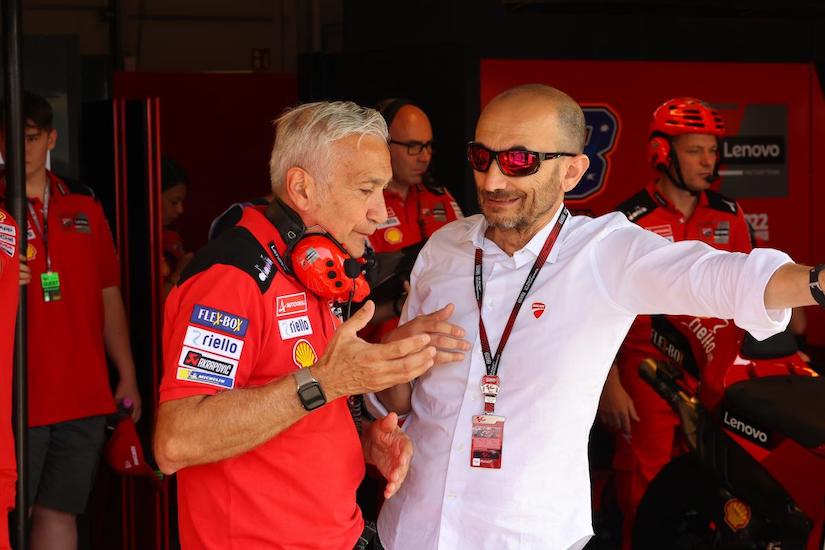 There will once again be eight Ducatis on the MotoGP™ grid on a full-time basis in 2023, but the Bologna factory is going about things slightly differently. Next year, just the Ducati Lenovo Team and Prima Pramac Racing will field GP23-model Desmosedicis, while Mooney VR46 Racing Team and Gresini Racing MotoGP™ will be supplied entirely with GP22s.

That marks a departure from the make-up of the Ducati fleet in 2022, with VR46’s Luca Marini also riding one of its latest-spec machines at present. Instead, only Francesco Bagnaia, his new team-mate Enea Bastianini, and Pramac duo Jorge Martin and Johann Zarco will be on GP23s next year. Marini and fellow VR46 rider Marco Bezzecchi, plus Gresini pairing Fabio Di Giannantonio and Alex Marquez, will be handed GP22s.

“Both VR46 and Gresini will be in 2022-spec and only Pramac will have exactly our bikes, the factory bikes,” he stated.

While it may seem a surprising decision, Tardozzi says there is a perfectly logical explanation: to make life easier for its satellite teams and their young riders by providing them bikes for which there is already a full season’s worth of data at their fingertips.
“We think it’s better to let the other two satellite teams concentrate on what is the well-known bike with a lot of data, and to let the younger riders grow in a better way with more data, [which] is much easier for them,” he reasoned.

Tardozzi also confirmed reports that Pramac will have a new Team Manager next year, namely the man currently in charge at the GASGAS Aspar Team which is leading the Moto3 World Championship, Gino Borsoi.
“That’s true,” he remarked.

“I think Paolo Campinoti [Pramac Group CEO and Pramac Racing Team Principal] made a very nice choice. Gino is a very talented and experienced team manager, so we are very, very, very happy to have Gino onboard.”

Current Pramac Team Manager Alberto Giribuola’s next move has not been confirmed, although he has been linked to another project on the MotoGP™ grid. It proves that, even if the rider market is just starting to quieten down, the silly season is not over yet.