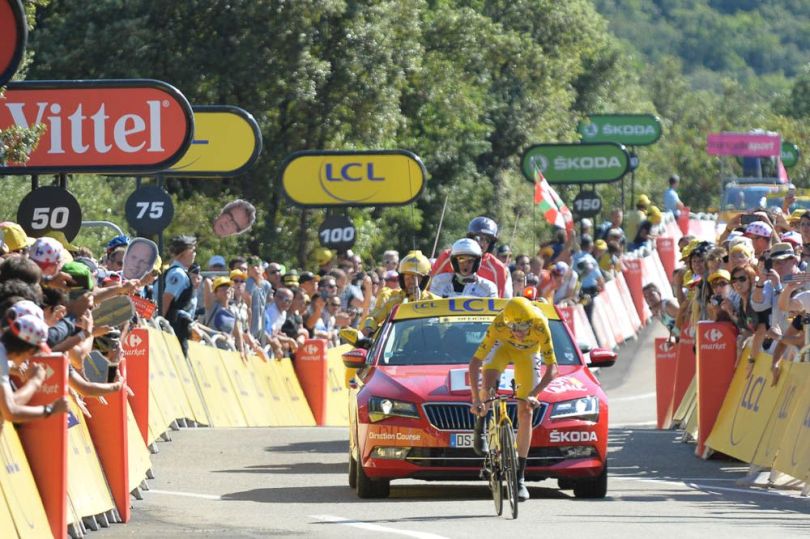 Festivities at the Tour were suspended and security ramped up for the 37.5km time-trial from Bourg Saint Andeol to La Caverne du Pont d’Arc.

Dumoulin proved a class apart, finishing the course in 50min 15sec, more than a minute clear of Froome.

But the 25-year-old was in little mood to celebrate.

“I’m not as satisfied as I normally would be if it wasn’t for the sad day that it is,” said Dumoulin.

“Cycling gets a little bit less important on a day like this, which is normal.

“I’m happy that I got the win, that’s what I came for to this Tour. I’m happy and at the same moment very sad for everyone involved in the Nice attacks.”

With other time-trial specialists like four-time world champion Fabian Cancellara and three-time laureate Tony Martin off the pace, Dumoulin was dominant.

But behind him, the main battle was to see how the overall standings would be shaken up.

In the end, there was little change, except for Froome gaining time on his main rivals.

Yet a visibly emotional Froome could not enjoy the moment and refused to answer questions of a ‘sporting’ nature.

“It’s pretty clear today that everyone’s thoughts are with those affected down in Nice,” said the 31-year-old Briton, who lives in Monaco, close to Nice.

“It’s difficult for us to even be here talking about the race when all that happened yesterday evening.

“It’s pretty close to home for me, I do a lot of training on those roads.

“To see the Promenade (des Anglais) the way it was yesterday evening, with bodies all over the road… it was horrific scenes.

“My deepest sympathies and deepest condolences go out to those families who lost loved ones yesterday in Nice.”

On the course, Dutchman Bauke Mollema resisted the best, losing only 50sec to Froome and moving up two places to second overall at 1min 47sec.

But it was a darker day for Froome’s expected toughest challenger Nairo Quintana of Colombia who lost more than two minutes and now sits fourth at 2:59.

“I’m quite far back, I hope to have good legs as there are still lots of mountains left,” said the Movistar rider.

“I hope to get back time, I’ll try of course (to attack) as I always have done.

“I hope to have the legs to try everything.”

He’s third now at 2:45 after what he described as his worst skill.

“I did a good time-trial for me, everyone knows I’m not good at time-trialing,” he said.

“I did the max and I’m happy to stay on the podium.”

The time-trial threatened to shake up the overall standings but for some riders, like Vuelta a Espana champion Fabio Aru (4:25 off Dumoulin) of Italy, Spanish veteran Joaquim Rodriguez (4:46) and Ireland’s Dan Martin (4:10), it was particularly unkind.

But standing at 1.86m and weighing 71kg, it wasn’t the case for Dumoulin.

Portugal’s Nelson Oliveira was the early leader with a time of 51:46, which proved good enough for third at the end.

But once Dumoulin came through and utterly obliterated Oliveira’s time by more than a minute and a half, there was a sense that the stage was done.

Australian Richie Porte started off quickly and was only 10sec down on Dumoulin at the first time check following a 7km climb at the start.

But he faded badly and finished more than three minutes down.

Froome was also in the mix early on, moving up from sixth at the first time check to second by the third.

Yet he was still losing time to Dumoulin at every point.

More significantly, though, he was gaining time on his rivals.

Overall standings after the 13th stage of the Tour de France on Friday a 37.5km time-trial from Bourg-Saint-Andéol to Vallon-Pont-d’Arc: