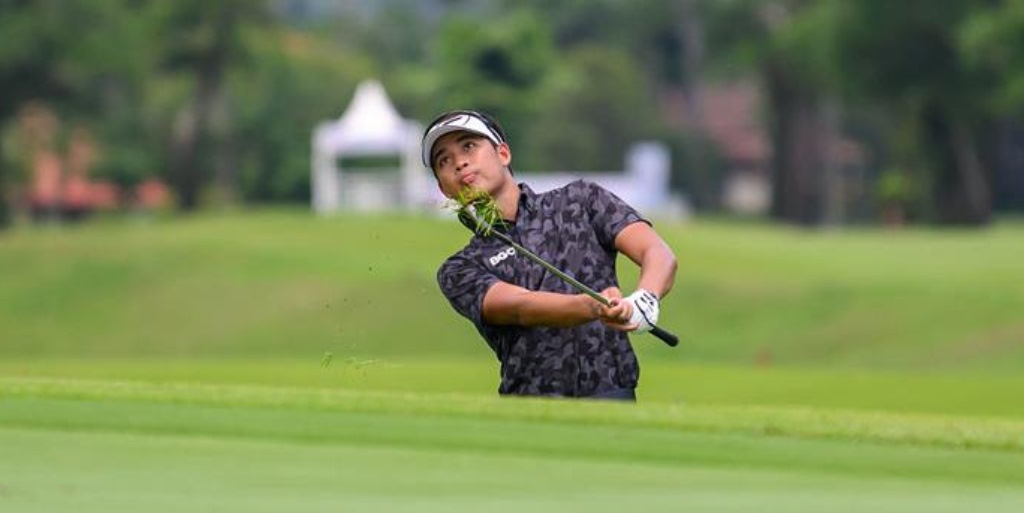 When Sarun Sirithon airmailed the green with his approach to the par-4 15th at Laguna Golf Phuket on Monday it seemed his epic final-round charge from five strokes adrift at the $75,000 Laguna Phuket Cup had come up short.

The attempted, Phil Mickelson-esque flop-shot from the fluffy lie that resulted came up well short of the putting surface and soon, after another undercooked chip, the 27-year-old Thai was inwardly cursing a momentum-stalling bogey.

It didn’t help that Malaysia’s Shahriffuddin Ariffin, the overnight leader, had just got up and down from a similar spot with an exquisite pitch to tap-in range to find himself alone again atop the leaderboard, albeit now by just a shot.

When Sirithon then tugged his tee shot slightly left of the green on the next hole, it appeared Ariffin, himself safely on the green, really wasn’t destined to waste the four-stroke advantage he’d started the final day with.

But you don’t wait four years for your shot at professional glory to give up on the dream that easily. Sirithon duly responded to the chips being down by chipping in for an unlikely birdie and was back level with Ariffin when the Malaysian’s birdie try never deviated from its incorrect starting line.

Sirithon and Ariffin then traded pars on the final two holes to finish at -14 and send the Beautiful Thailand Swing event to extra holes.

The Thai had a chance to win in regulation time but couldn’t conjure his birdie attempt from just off the green into the cup, relief for Ariffin who had remained alive with another stunning up and down from beyond the final green.

The duo then twice traded pars on 18 to send the playoff to the 9th tee in a switch up that proved third time lucky for Sirithon.

Ariffin gambled with a risky three wood approach into the par-5 from a hanging lie. With the ball well above his feet, the shot flared way right of the green and took some time to be rediscovered in the lush rough. He did give himself a birdie attempt with a decent pitch but it wasn’t as close as Sirithon little pitch from just off the green. He duly drained his shorter putt for birdie and a breakthrough Asian Development Tour (ADT) victory sealed with a modest little fist-pump.

“I am very happy. This is my first ADT win, my first professional win,” said Sirithon after posing with his cheque for US$13,125.

The Thai admitted afterwards that he had told his caddy if he could chip in on the 16th, he believed it might just be his day. So it proved.

“I’ve tried [practiced] very hard for this win so I feel great today with what this success means for my career.”

“I want to play better in the ADT first and then the next step is to play in the Asian Tour,” Sirithon said through multi-tasking Asian Tour Senior Tournament Director Wanchai Meechai who doubled as a prizegiving translator.

You had to feel for Ariffin who lead by as many as five strokes in a topsy-turvy final round where he was left to rue a three-hole stretch from the 6th that cost four dropped strokes. The Malaysian battled gamely on the back nine but signed for 70 compared to Sirithon’s closing 65 and will have to wait for a second ADT title.

Tawit Polthai finished solo third a stroke shy of the playoff on -13 while England’s Joe Heraty stormed home with a 62 to head a three-way share of fourth place with the Thai duo of Vanchai Luangnitikul and Ekpharit Wu.