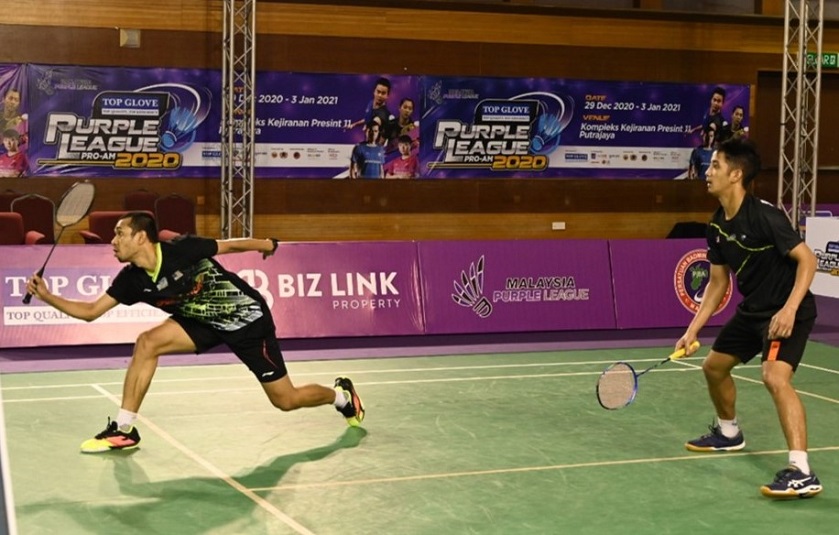 Setting a date with them in the semi-finals is 3 Soong Joo Ven who forms a rare partnership with Liew Daren.

After two straight clearances, Iskandar said he was surprised as he did not anticipate that he could get through easily.

“It’s our first time partnering each other and there’s some room for improvement. Hopefully it’s going to get better and we’re confident of winning the championship.”

Azriyn said it’s been a while since he last competed ever since the movement control order (MCO) was introduced and he is still getting used to the no-crowd race. In addition, he will try to mend the shortcomings of the tie-up with Iskandar as soon as possible, as the other semi-finalists, Liew Daren and Soong Joo Ven will be his biggest challengers throughout the tournament.

Another title-winning favourite, Liew Daren and Soong Joo Ven, went through a vicious battle to win 10-11, 5-11, 11-5, 11-8 & 11-7 in the last three games to beat Ahmad Maziri Mazlan-Mohd Arif Abdul Latif. Soong Joo Ven said in a post-match interview that he was satisfied with his performance today. “After all, we’re not doubles players, and although we usually practise with a partner, it’s the first time we’ve played officially.”

Despite some loopholes, former national player Liew Daren said they are getting better. Even if they are favoured as a strong title-winning team, they modestly acknowledged that featuring in doubles is not their strong point and will be ready for every game, playing one game at a time.