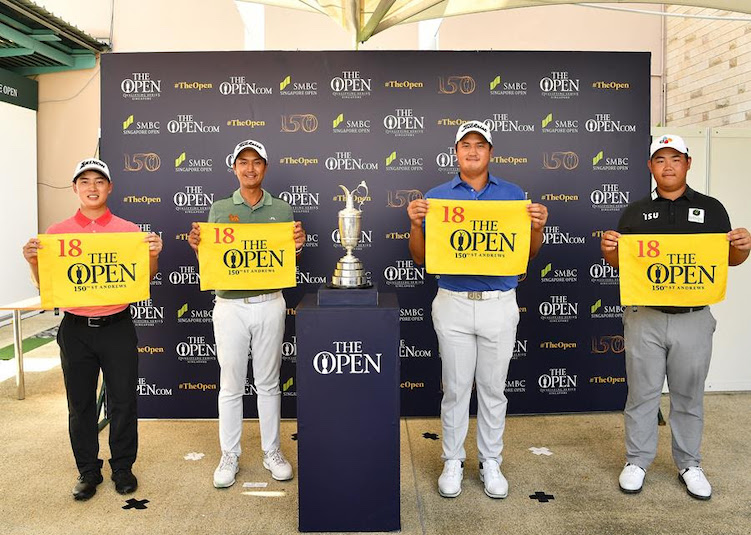 Thailand’s Sadom Kaewkanjana, Yuto Katsuragawa from Japan, Korean Joohyung Kim, and American Sihwan Kim have booked their berths in the elite field for the Open Championship this year, which is celebrating its 150th anniversary and will be played at St Andrews.

Sadom led the way by winning the SMBC Singapore Open today while Katsuragawa and Joohyung Kim were second, with Sihwan Kim fourth.

Said Sadom: “This is a dream come true, it will be my first Major. I am so happy.”

It marks the second time in succession that Kim has made it through to golf’s oldest Major via the SMBC Singapore Open as he finished fourth in 2020, the last time the prestigious event was played.

“I had the opportunity to play in The Open last year but could not because of COVID, so it means so much to have a second chance,” said Kim.

The Open will be played on the Old Course at St Andrews from July 14-17.

Since 2017, the SMBC Singapore Open has been part of The Open Qualifying Series – an honour bestowed on the tournament by The R&A.

The Open Qualifying Series allows for the leading four players who finish in the top 12 and ties at the SMBC Singapore Open and who are not already exempt to earn a place in the game’s oldest Major.

The last time The Open was played at St Andrews was in 2015, when American Zach Johnson beat Marc Leishman from Australia and South African Louis Oosthuizen in a four-hole play-off.

In 2020 the top four finishers to qualify along with Kim were, Poom Saksansin of Thailand, Canada’s Richard T. Lee and Ryosuke Kinoshita of Japan. They earned a place in the field at Royal St George’s last year. Both Kinoshita and Poom excelled by making the cut, making it memorable first appearance in the event.

The Open Qualifying Series provides the opportunity for players to realise their dream of playing in golf’s original Championship.

Places in The Open are available in a host of events across multiple continents. The Open Qualifying Series started at the Joburg Open at Randpark in Johannesburg last November.

Three places were on offer at there, with Thriston Lawrence, Zander Lombard and Ashley Chesters booking their spots at the home of golf.