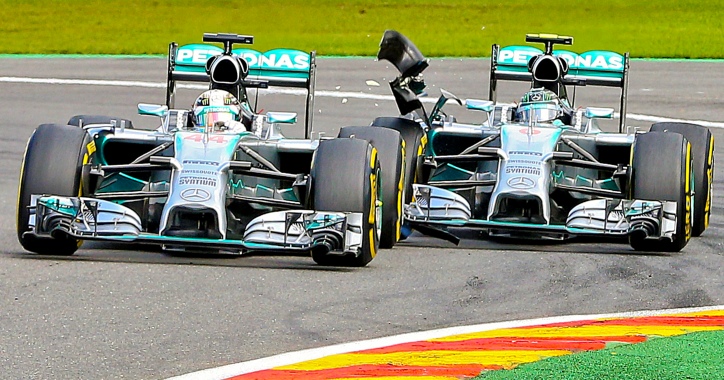 Feuding Mercedes team-mates Lewis Hamilton and Nico Rosberg will be free to race but under strict new “rules of engagement”, starting at this weekend’s British Grand Prix.

Four days after their last-lap crash in Austria, with defending champion Hamilton going on to take victory, Mercedes team chief Toto Wolff signaled the pair had been given a final warning about their on-track behaviour following a run of three collisions in five races.

Talking to reporters at a news conference in the paddock at Silverstone ahead of Hamilton’s home race, the team boss made clear the fierce title rivals would face punishment if they had another prang.

Separately, in a statement following a meeting at team headquarters on Thursday, Mercedes said they had “strengthened our rules of engagement to include much greater deterrents to contact between our cars.”

Team orders would be imposed only “as a solution of last resort” and if the drivers failed “to honour the revised rules of engagement.”

Rosberg was penalised by the race stewards at the Austrian Grand Prix for failing to give Hamilton sufficient “racing room” when he was being passed by the Briton on Turn Two of the final lap at the Red Bull Ring.

In their collision, Rosberg’s car suffered front wing damage and he fell from race leader to fourth. Wolff had branded the incident — just the latest between the championship rivals — “brainless”.

The warring duo — once close friends — also crashed on the opening lap of the Spanish Grand Prix, an incident that ended both of their races, and banged wheels in Canada but escaping unscathed.

“We are still able to race, which is a positive,” said 31-year-old Hamilton, speaking at a pre-race news conference.

“No team orders… So everybody should be excited.”

Like Wolff and Rosberg, he declined to give any details on the new accord for racing.

He said their discussions were “private and confidential”.

Asked if believed he can still race in the way he had at last year’s Japanese and United States Grands Prix, where Rosberg complained he had been pushed off the track, Hamilton said: “In all those races, the stewards deemed that racing. So I will still race like that.”

Hamilton’s assessment seemed to be contradicted by Wolff later when the team chief said he did not like last Sunday’s similar move “because it could have ended in a double DNF (non finish)… Such a manouevre cannot happen anymore.”

The drivers have been told, the team said, that their freedom to race “came with a duty to respect the values of the team.”

Wolff refused to explain what kind of punishments the team had in mind if they broke the new code.

“I am not detailing this in public -– it is a very internal thing,” he said. “It is like contract details… with sporting and financial consequences.”

In real terms, this probably means fines or suspensions, moves that would have a clear impact on the drivers as they go into another tense weekend.

Rosberg, who has seen his championship lead whittled down in recent weeks, said Wolff and the Mercedes hierarchy had made it clear they would not accept any more clashes.

“For sure this is a serious matter which needs to be discussed because we are team-mates in the end and we must avoid contact and collisions and costing the team points in such a way,” he said.

“Definitely, it must be discussed and that’s what we did, very constructively and come to some conclusions, agreements — and now it’s moving forward.

“For sure, the message has arrived. They (Mercedes) have done a very good job in bringing home the message.” – Agence France-Presse