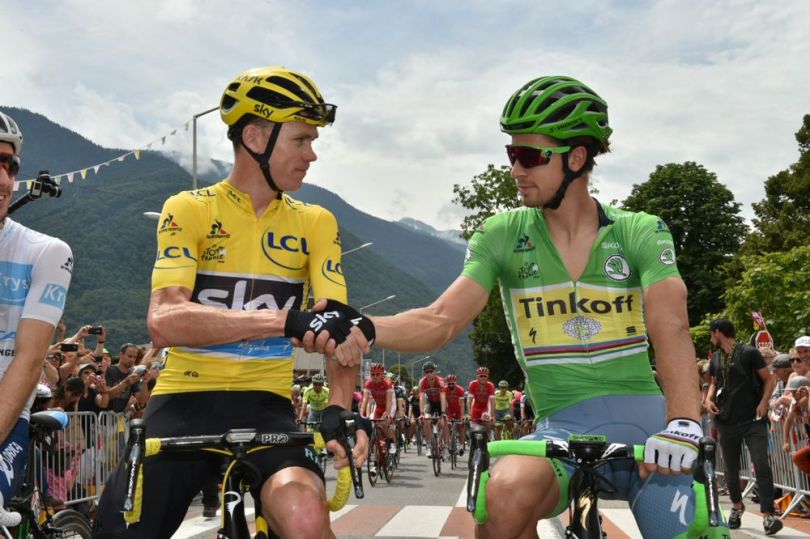 Chris Froome crashed on a slippery descent but showed grit and determination to fight on and retain his race leader’s yellow jersey at the Tour de France on Friday.

Romain Bardet earned the first stage victory for a Frenchman this year and moved up to second overall after taking advantage of the rainy 19th stage conditions in which Froome faltered.

Bardet finished 23sec ahead of Joaquim Rodriguez after attacking on a slippery and dangerous descent where several of his rivals crashed.

One such was Froome, who was lent a bike by team-mate Geraint Thomas in order to continue to the finish, with his jersey ripped.

He finished ninth at just 36sec behind Bardet and even extended his overall lead.

That was because Dutchman Bauke Mollema, who started the day second, crashed once and skidded off the road a second time before coming home 4min 26sec after Bardet and dropping to 10th overall.

Porte had been climbing well all Tour but had difficulty on the final descent and had to chase back up to the group of favourites before cracking in the final kilometre.

He came over the line 10th at 53sec, a few seconds ahead of Yates.

A 20-man breakaway group took off from the start and quickly built up a lead of more than four minutes.

But the Astana team of Fabio Aru had other ideas and took up pace-setting duties in the peloton to limit the advantage, bringing it down to just 2min 30sec with 60km left.

With podium places up for grabs, Aru wanted not only the stage win, but also the time bonus on the line that would bring.

As the breakaway went over the 12.4km hors category Montee de Bisanne, rain started to fall making the road slippery.

Frenchman Pierre Rolland attacked on the descent but crashed, leaving Rui Costa, the only man to have followed him, alone in the lead.

With 30km left, Costa had opened up a lead of almost a minute on the remnants of the breakaway with the peloton at 1:45.

Porte got into trouble on the downhill and lost 45sec to the pack, but three BMC team-mates slowed up to help pace him back into the peloton.

The Astana-led peloton passed the chasers with 25km left as Costa’s lead was now 1:15.

The rain was causing havoc on the final descent before the Saint Gervais Mont Blanc climb to the finish with several riders crashing, including Froome.

With all the carnage, Bardet took the opportunity to attack, helped by team-mate Mikael Cherel, although he almost clipped a parked car.

Mollema was the worst affected of the riders who crashed and quickly lost significant time.

The crashes helped Portugal’s Costa stay clear but Bardet caught him with just under 8km left.

Froome seemed to be struggling at the back of the peloton but was soon in his usual position at the front behind his super-domestique Wouter Poels.

With just over 3km left Costa lost contact with Bardet but the peloton was now at just 30sec.

Dan Martin and Porte both tried attacking but neither could stay clear, although Yates started to lose contact with the favourites.

In the final kilometre it all broke up as the standings were turned on their head. – Agence France-Presse