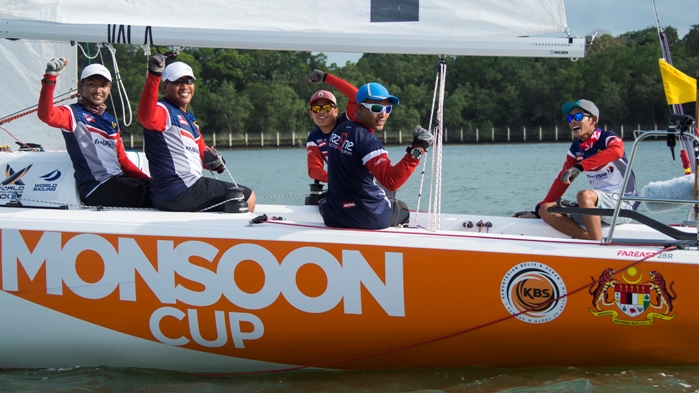 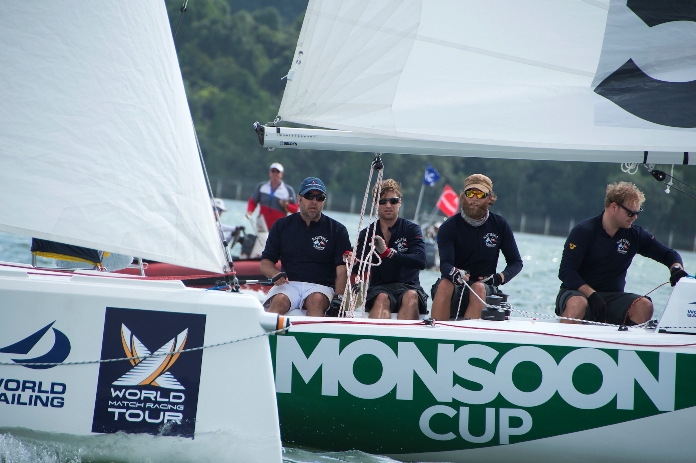 The finale of world match-racing series, Monsoon Cup Malaysia, this season provided competitors, officials and fans with colourful stories to take home and ponder about before the start of the new World Match Racing Tour (WMRT) season in March.

Johor once again hosted the competition at a new venue of Puteri Harbour Marina.  Another change was the introduction of the FAREAST 28R boats used for the first time in match-racing.  The teams adapted well to the new environment and boats, despite some teething problems.

The familiar names at the top of the leaderboard – Ian Williams, Bjorn Hansen, Taylor Canfield and Keith Swinton – came to Johor each with a chance at the world championship title.  Long story short, the winner of Monsoon Cup Malaysia will become world champion.

Day 1 of racing provided a very nice surprise for Malaysians as Johor-born Hazwan Hazim Dermawan and hazOne Racing Team overcame Swinton and Black Swan Racing in their opening qualifying round match.  A local team has not won a single point in the past decade, not since Tiffany Koo’s Selangor Gapurna – a mixed team of Malaysian and international sailors – secured a point in their Monsoon Cup Malaysia campaign.

Hazwan earned his ticket to compete in this regatta after emerging as the overall champion of the local match-racing circuit Liga Layar Malaysia (LLM) for 2015, winning five of the eight stages held throughout the year.  He was in the headlines again on the second day of competition when he scored a win against Hansen of Nautiska Racing, who came to Johor ranked second on the WMRT leaderboard.  Hazwan could have secured a couple more wins but his opponents took advantage of his lack of experience on the international stage and showed Hazwan how it’s done.

The weather became the opponent to watch out for as squalls and light wind played havoc with the schedule.  The quarter-final round stopped halfway due to adverse weather, which put a slight damper to the proceedings but the show continued despite the challenges.

Day 5 saw a happy Pricipal Race Officer David Tallis as the sun came out along with a steady wind up to over 11 knots and the race team was able to complete the semi-final, petit-final and final rounds with a bit of time to spare before the prize giving ceremony.

Williams was just too good for his opponents – Hansen in the semis and Canfield in the final – and showed everybody why he is the one to lift the WMRT championship trophy for a record-breaking sixth time.

The new WMRT season will have major changes to its format, with the introduction of the M32 catamarans at most legs.  The first stage will be held in Fremantle, Australia from 2 to 7 March.

Runner-up: Taylor Canfield (US One)