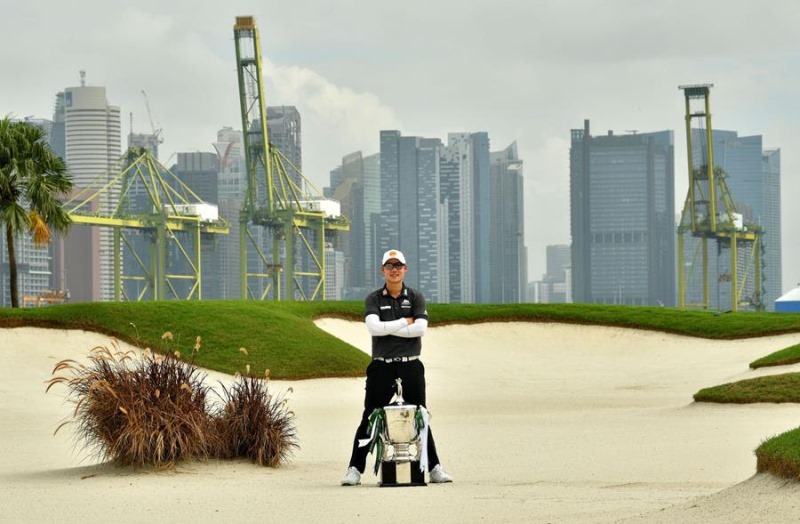 Thailand’s Jazz Janewattananond is ready to light up the stage again as he aims to become the second player in the history books of the Singapore Open to successfully defend his title when the SMBC Singapore Open starts on Thursday.

It has been more than a decade since Australia’s Adam Scott retained the iconic Singapore Open title at the Serapong Course in Sentosa Golf Club in 2005 and 2006, which is also the Home of the Asian Tour.

But with the form that the 2019 Asian Tour Order of Merit champion is currently enjoying, he is once again expected to be one of the favourites for the Singapore showpiece, which continues to be part of The Open Qualifying Series for the fourth consecutive year.

Jazz enjoyed a season like no other in 2019 when he swept aside all his rivals with four victories along with capturing the coveted Order of Merit trophy.

Korea’s Doyeob Mun, who secured one of the four spots to The Open at the SMBC Singapore Open last year, still holds vivid memories of his last outing to the Lion City and is relishing the challenges at the Serapong course again.

Quek also finished tied-26th for the tournament, which remains his best result at the SMBC Singapore Open so far.

Jazz Janewattananond (Tha)
Winning the SMBC Singapore Open last year really opened a lot of doors for me last year. I managed to break into the world’s top-100, got into many tournaments and had many other new opportunities. I have to thank this tournament and I am really happy to be back this year. I got the same locker as last year so hopefully this year the same magic happens. If you play well here, you can get started to get the ball rolling for the year. It is a very big week and a good start for the year. I think it is important to be strong mentally, especially on the golf course when you have to hit the straight and long shots. I need to pick which tournament would be the best for me out of all the tournaments. If I am playing America, I would just stick to that country for that period, and likewise for Europe or Asia. I would not want to be flying back and forth as it would cause jet lag and fatigue. So I think that’s why I signed with Excel Sports Management to help me solve these sorts of problems. I think it is good to have more alternatives, and more tournaments to choose from. I think with the Masters and the Olympics this year, these are two very important tournaments to me. Masters would be my first one and it was always my dream as a kid to be able to compete in the masters. Golf is on the Olympics this year and I am really looking forward to playing in the Olympics which is the biggest sporting event in the world.

Doyeob Mun (Kor)
I have very good memories of this place from last year. I made an albatross in the second round to make the halfway cut! I’m feeling the good vibes coming back here. I just want to enjoy this week. I will aim to focus on every shot and try my best to post another good result here.
The greens feel not as fast as last year so far, not yet! I’m sure it will get faster. The course is looking great as usual. The weather’s a little bit humid. The course seems to be playing longer. But overall, everything looks great this week. I did enjoy a good season last year but last week in Hong Kong, I didn’t quite get my feel back. My swing wasn’t that good so I have been practicing and focusing on the mechanics at the range quite a bit. I hope it will be better this week. I played well here last year to get a spot at The Open where I made my Major debut. I’m not going to think about it now because that will give me a lot of pressure. I will just focus on my game and I believe the results will show. I think you need to hit good iron shots here and you need to putt well to score. This is not an easy course. You need to place the ball on the right positions on the greens to give yourself a chance for par or birdie. That’s the key I think.

Quincy Quek (Sgp)
I haven’t played a tournament in a month and I’m starting out fresh this week. But having said that, I’m really looking forward to the week. I’m not going to put any targets but rather focus on my process instead. My goal for 2020 is to be more consistent. Even though I had two wins last year, I still feel I didn’t have that many good finishes although I had a couple of top-10s. The course still seems to be the same. It’s firm, fast and challenging.

James Leow (Sgp)
You don’t get a lot of chances to play in professional events as an amateur. I’m very happy that the Asian Tour gave me a sponsor’s invitation to play in the Hong Kong Open last week. I have been practicing a lot and working on my game. That golf medal in the Philippines has done wonders for my career and it’s definitely a confidence booster towards my dream. My dream is to get onto the PGA TOUR and play alongside big names like Jordan Spieth and Justin Thomas. Right now, I’m just trying to stay in the present and focus on getting there, hopefully one day. Getting to play in front of the home crowd at the SMBC Singapore Open this week means a lot to me but I’m telling myself to focus on the process and focusing on what I need to do, instead of the outcome and expectations. I’m looking forward to playing in the SMBC Singapore Open this week, especially after winning the gold medal. I think a lot of people are more aware of me, as well as the Singapore team. I’m sure there are a lot more people supporting the Singapore team now as well. The Serapong course is really tough as you can see. Jazz (Janewattananond) played really well last year to win. The average scores there is usually slightly below even-par or slightly above. I’m looking forward to playing the course this week, fast and firm greens and long holes. My family and friends will be out to support me this week so I’m really excited. I haven’t really set a target for myself but realistically, I hope to finish inside top-10 which has always been the goal since the start.