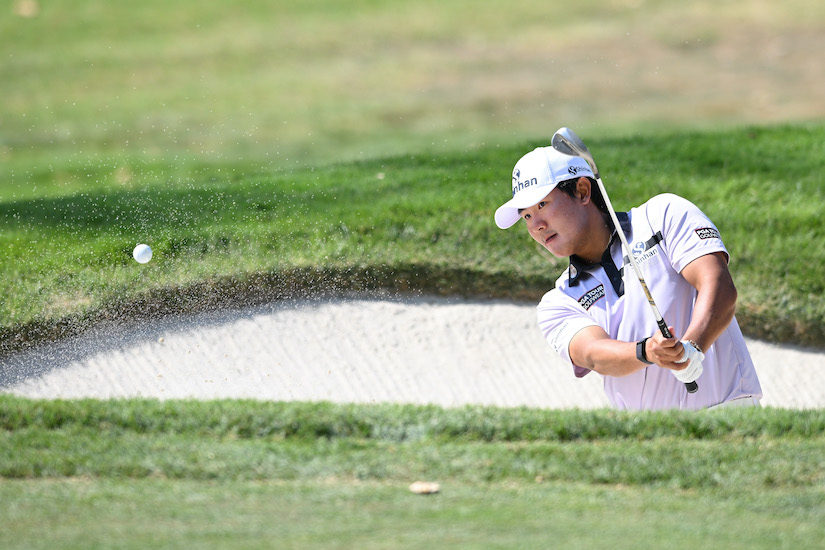 Korean rookie S.H. Kim was a bundle of nerves at the start of his first day in the office on the PGA TOUR. A subsequent 6-under 66 at the Fortinet Championship has since got him thinking about winning.

Kim, 23, shot eight birdies on Thursday at Silverado Resort and Spa (North) in Napa, California to share third place with countryman Byeong Hun An, some three shots back of clubhouse leader Justin Lower who shot a career low 63.

Defending champion Max Home, who will make his Presidents Cup debut next week for the U.S. Team, started well with a bogey-free 65 for solo second as the first round was suspended due to darkness. A total of 35 players will complete their first round on Friday morning.

After securing his PGA TOUR card following a successful campaign on the recently concluded Korn Ferry Tour, Kim made an immediate impression despite feeling jittery before his round.

“Yeah, I haven’t felt this nervous,” said Kim. “Definitely the first two holes I was really nervous, nerve wracking but then I had a birdie on No. 3 and a couple more after that, I felt more comfortable on the course. Really got into a rhythm.”

He holed putts of 17 feet, two feet and 18 feet for three consecutive birdies from the third hole and cruised home with five more birdies against two bogeys. Kim, a winner on the Korean and Japan Tours, said earning his playing rights on the elite circuit was a dream come true.

“It is what I dreamt of, everything to the course setting, it’s world class, as far as facilities and amenities. I’m just happy to be here, (and) to possibly have my first win out here would be my new goal,” said Kim.

Compatriot An is making a welcome return on the PGA TOUR after losing his card for the first time in five season in 2021. Once ranked in the world’s top-30, he regained his status following one win and seven top-25s on the Korn Ferry Tour.

“I’ve got to appreciate every single event and try to make the most out of each week,” said An. “I putted decently, hit it pretty good. I scrambled well and made some long par putts and birdie putts. Nothing was falling away from the vehicle, so overall 6 under, very happy with it.”

Losing his PGA TOUR status was a wake-up call as the 30-year-old began to put in greater effort into his game at the end of last year, which included gym work and more hours on the range. He also started hitting a punching bag as a cardio workout which has helped increase his club swing speed and distances.

“I feel like I’m a little bit better technically. My long game’s been steadier and a little bit tighter, but I feel like a bit of a mindset difference. You know, never lost my card and then last year was a big struggle and that kind of hit me pretty hard in my head,” said An.

“Just keep believing in myself, I think. I feel I have the game. My team, we always say if you just play like the way you do and some putts drop, get a lucky bounce, you’ll win it. It’s only the first week of the new season, but I’m going to do the same thing I’ve been doing the last couple months and hopefully everything clicks at once and get the win.”