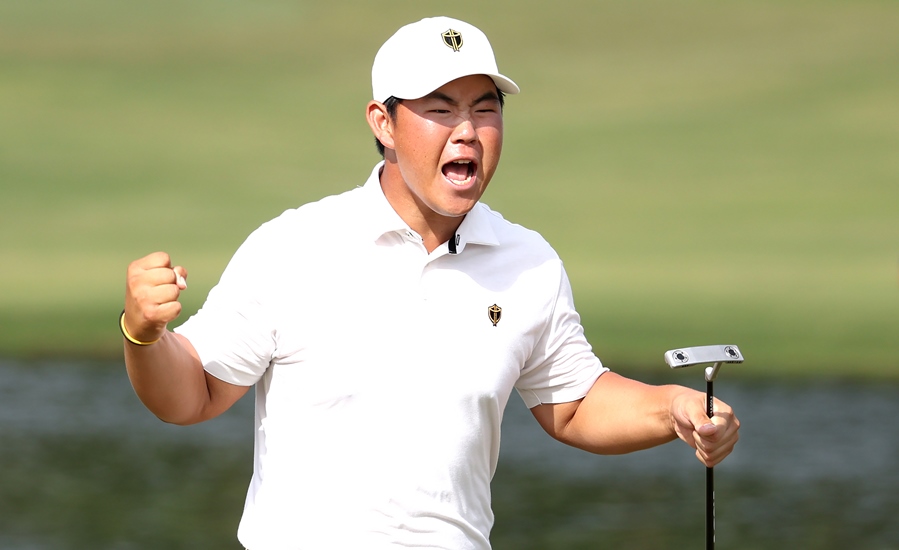 Driven by another record-equalling bid, Korean golf star Tom Kim roared into contention at The American Express on Friday with a stunning 10-under 62 for tied third place and five back of second round leader, Davis Thompson.

The 20-year-old Kim, who is a two-time PGA TOUR winner, fired an eagle and eight birdies at the Nicklaus Tournament Course to sit on 13-under 131 in the US$8 million PGA TOUR event. The first three rounds are played over three courses.

Following an opening 69 at La Quinta Country Club on Thursday, Kim took seven holes to put the spark back into his campaign where he gained six strokes that included an eagle on the par-5 11th. After making the turn, he birdied holes Nos. 1, 4, 7 and 9.

Kim is making his 23rd start on the PGA TOUR this week and has a final chance to emulate Tiger Woods’ record of requiring the fewest number of starts to reach three PGA TOUR victories. Woods claimed his third TOUR title at the 1997 Sentry Tournament of Champions in what was his 23rd start.

The supremely talented youngster believes an improvement to his putting made all the difference.

“I had a good putting round. It’s been a few rounds since it’s been like this today. It’s kind of nice to know that I still have my feel on my putter and my putter’s still working,” said Kim, who won the Wyndham Championship and Shriners Children’s Open last year for his first two titles last year and become the first golfer since Woods to claim two PGA TOUR titles before turning 21.

Kim, who is currently third on the FedExCup standings, began 2023 on a strong note following a tied fifth finish at the Sentry Tournament of Champions but uncharacteristically missed the halfway cut at the Sony Open in Hawaii.

“Even yesterday, since Sony, didn’t have really good putting rounds. I feel like I putted great, but just the hole was looking really small. I went with a different mindset today and I felt really comfortable on the greens and just going up to my ball.

“So, I think that was the big thing. Definitely a lot of positives. Really happy with the way I played today.”

Kim was joined in third place by compatriot Sungjae Im, who carded a solid 66 at the Stadium Course to also stay in the hunt for a third PGA TOUR victory while last week’s Sony Open winner, Si Woo Kim bounced back from a modest opening 70 with a bogey-free 64 on the Nicklaus Tournament Course to share 14th place on 10-under. Si Woo is on a mission this week to reclaim The American Express title he won in 2021.

Kevin Yu of Chinese Taipei and K.H. Lee of Korea were the other two Asian players who improved tremendously to keep their hopes alive of making the 54-hole cut.

Yu will enter the penultimate stage on 6-under in T59 after shooting a 67  at the Stadium Course while Lee registered a 68 at La Quinta to lie T88 on 4-under.

Thompson topped the second round in style by firing a 64 at the Nicklaus Tournament Course to race two shots ahead of John Rahm of Spain on 18-under. Rahm was victorious in the Sentry Tournament of Champions.