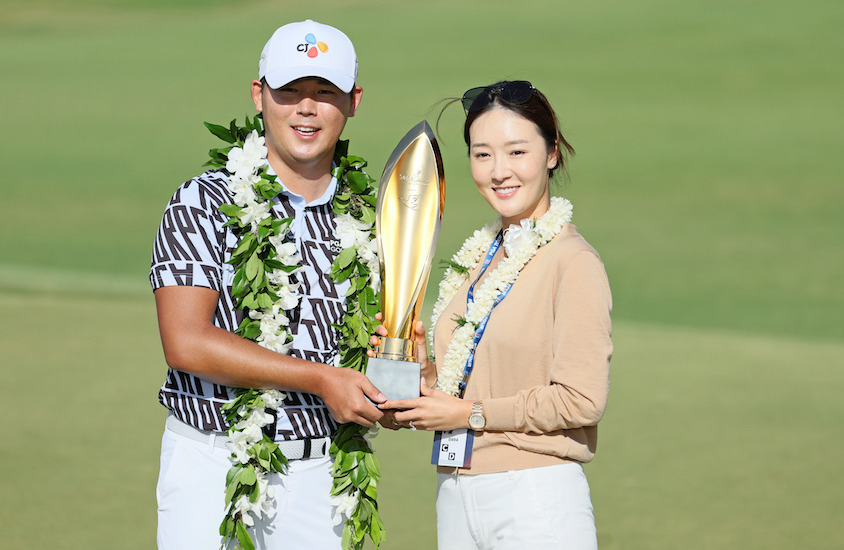 Korea’s Si Woo Kim produced a sensational come-from-behind victory over American Hayden Buckley at the Sony Open in Hawaii for his fourth career PGA TOUR title on Sunday, and his first as a married man.

Trailing overnight by three shots, the 27-year-old Kim got hot early in his final round with three opening birdies and after jostling for the lead with three more birdies and two bogeys, he chipped in for a glorious birdie on 17 and tapped in at the par-5 18th hole for a 6-under 64 and 18-under 262 winning total.

He emulated compatriot K.J. Choi, who was victorious at Waialae Country Club in 2008, and succeeded Presidents Cup International teammate Hideki Matsuyama, who triumphed at the Sony Open 12 months ago.

Kim married sweetheart and Korean LPGA player, Ji-Hyun Oh, in Seoul last month and said his latest victory, which lifted him to eighth place on the FedExCup points list and earned him US$1.42 million, was also very much due to her calming presence on the holiday isle.

“It definitely helped that she is with me here. She came to U.S. after her season ended and came out to some tournaments with me. It helps keep me calm and comfortable both inside and outside the ropes. Especially today, I could see her on golf course and when I was little nervous, that really helped me relax. Feels like we’re on honeymoon because we came here a week early,” said Kim, who led the field in total birdies this week with 24.

Hayden, who was chasing a first TOUR win, settled for runner-up place after a 68. He missed a 12-foot birdie putt at the last to force a playoff.

Kim charged out of the blocks by holing birdie putts of 10 feet, 16 feet and nine feet over his first three holes but did not need the flat stick for the most important birdie of the day on 17, a par-3 where he sailed the green with his tee shot.

After hearing a loud cheer on the 16th green as a result of Hayden regaining a one-shot lead, Kim chipped in from 30 feet for birdie before letting out a big fist pump and raising both hands in celebration.

“I knew he made a birdie. I heard the noise so I have to hit it aggressive. I have nothing to lose,” said Kim, who was playing in the penultimate group. “It feels great and then, like the first three holes like was on fire.”

He was happy to follow in the footsteps of K.J. Choi by becoming a winner in Hawaii. Choi has blazed a trail for Korean and Asian golf for over two decades, winning eight times on TOUR where he presently holds the joint record for most victories alongside Matsuyama, who finished tied 48th in his title defence.

Kim’s triumph was also on the 40th anniversary of Isao Aoki’s Sony Open win in 1983 which made the Japanese legend the first Asian winner on the PGA TOUR.

“It is great that I won again the event that K.J. has won previously,” said Kim who also won the 2017 PLAYERS Championship – the TOUR’s flagship tournament which Choi is also a former winner. “It is a good omen for me. He has won many tournaments and I always want to follow in his footsteps. It is a great honour to me.”

Kim is now determined to add to his career tally although he admitted he had put too much pressure on himself in recent years. “It’s like my first time winning the first event, so I think it can’t be better than this. This is really exciting, and hopefully, a lot left. Hopefully, try to get more confidence and get more wins,” he said.

“It was a tough year, last year. I played a lot of good rounds, but I didn’t play well on Sundays. That’s why I finished a lot of 13th. I think that helps me become more patient, and then this year trying to have a mindset, like trying to be less upset, and being more positive. Friday and Saturday were a little upsetting for me, but I didn’t act much. I think that helped. So have to be more patient and just try to play my golf.”

Korean duo Byeong Hun An and S.H. Kim, who graduated from the Korn Ferry Tour, finished tied 12th on 268 after closing rounds of 67 and 68 while Chinese Taipei rookie Kevin Yu (68) and China’s Carl Yuan (68) were amongst those who shared 21st position.