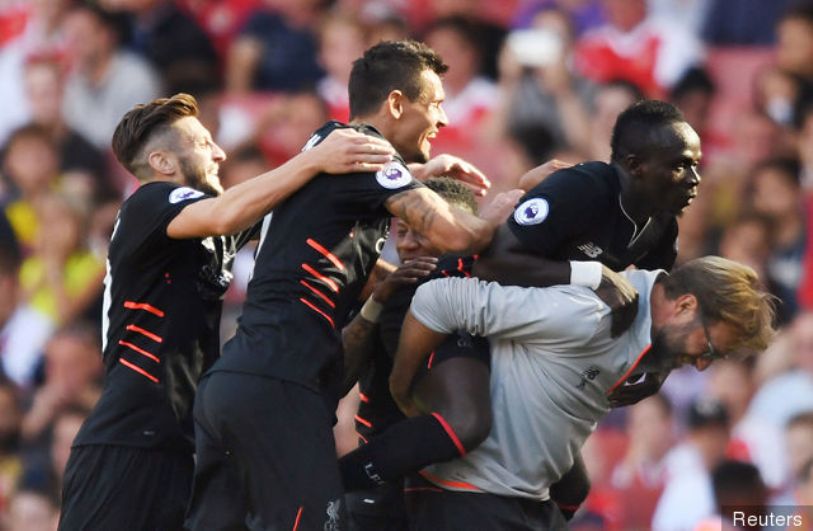 Sadio Mane began repaying the 34 million pounds ($44 million, 39 million euros) fee Liverpool splashed out to lure him from Southampton by scoring in a 4-3 English Premier League triumph over Arsenal.

The Senegalese sharpshooter notched a stunning individual goal in London on his Liverpool Premier league debut as the most popular football league in the world kicked off at the weekend.

Another African to impress was Egyptian defender Ahmed Elmohamady, who set up the winner with a marauding run and cross as promoted Hull City won 2-1 against defending champions Leicester City.

Algeria winger Mahrez was elected the Professional Footballers’ Association (PFA) Player of the Year last season after his 17 goals and 12 assists inspired Leicester to their 5,000-1 title triumph. He opened his account for this season with a 47th-minute penalty at Hull, slamming the ball past Eldin Jakupovic after Tom Huddlestone had been penalised for clipping Demarai Gray (an offence that appeared to have occurred outside the area). Mahrez’s goal cancelled out Adama Diomande’s opener, but Robert Snodgrass restored the hosts’ lead to give Hull a shock 2-1 win.

Musa made his competitive debut for Leicester at Hull following his club-record 16.6 million pounds transfer from CSKA Moscow and he was manager Claudio Ranieri’s brightest player on what was otherwise a day to forget for the champions. Twice the Nigeria forward’s pace and trickery culminated in sights of goal for strike partner Jamie Vardy, but the England striker fluffed his lines on both occasions, first with an embarrassing air-shot, then with an uncontrolled effort that sailed over the bar.

Back in the top flight after a season in the Championship, Egyptian flier Elmohamady played a crucial role as crisis club Hull — without a permanent manager following Steve Bruce’s resignation and able to name only 13 senior players in their match-day squad — stunned Leicester at the KCOM Stadium. It was his marauding run from right-back that yielded Snodgrass’s 57th-minute winner. Elmohamady’s cross was only partially cleared by Danny Simpson and Snodgrass pounced on the loose ball to rifle a shot past Kasper Schmeichel.

Senegal forward Mane opened his Liverpool account with a stunning individual goal as Jurgen Klopp’s side edged Arsenal 4-3 in a pulsating game at the Emirates Stadium. The visitors were 3-1 up in the 63rd minute when Mane drove down the right wing and cut between Arsenal defenders Nacho Monreal and Calum Chambers before rifling a left-foot shot into the top-left corner. The former Southampton player celebrated by taking a ride on Klopp’s back.

With Mesut Ozil and Olivier Giroud still building up fitness after their exploits at Euro 2016, 20-year-old Nigerian forward Iwobi was handed a starting berth on the left flank by Arsenal manager Arsene Wenger. He created the hosts’ opening goal in the 31st minute with an incisive pass inside Alberto Moreno for Theo Walcott, who drilled home. But Iwobi was forced off by a thigh injury in the second half as the home side capitulated.

The Cameroon striker netted twice inside the opening 20 minutes of a French Ligue 1 match at Caen. Moukandjo converted a low cross from Ghana international Majeed Waris to put Lorient ahead and then doubled the lead from the penalty spot. However, his brace came in a losing effort as Lorient threw away a two-goal lead in a painful 3-2 defeat.

The Algeria midfielder delivered the only goal in a 1-0 home win over Angers. Boudebouz carved out space on the edge of the area with some neat footwork before curling a superb left-foot strike inside the far post after just eight minutes.