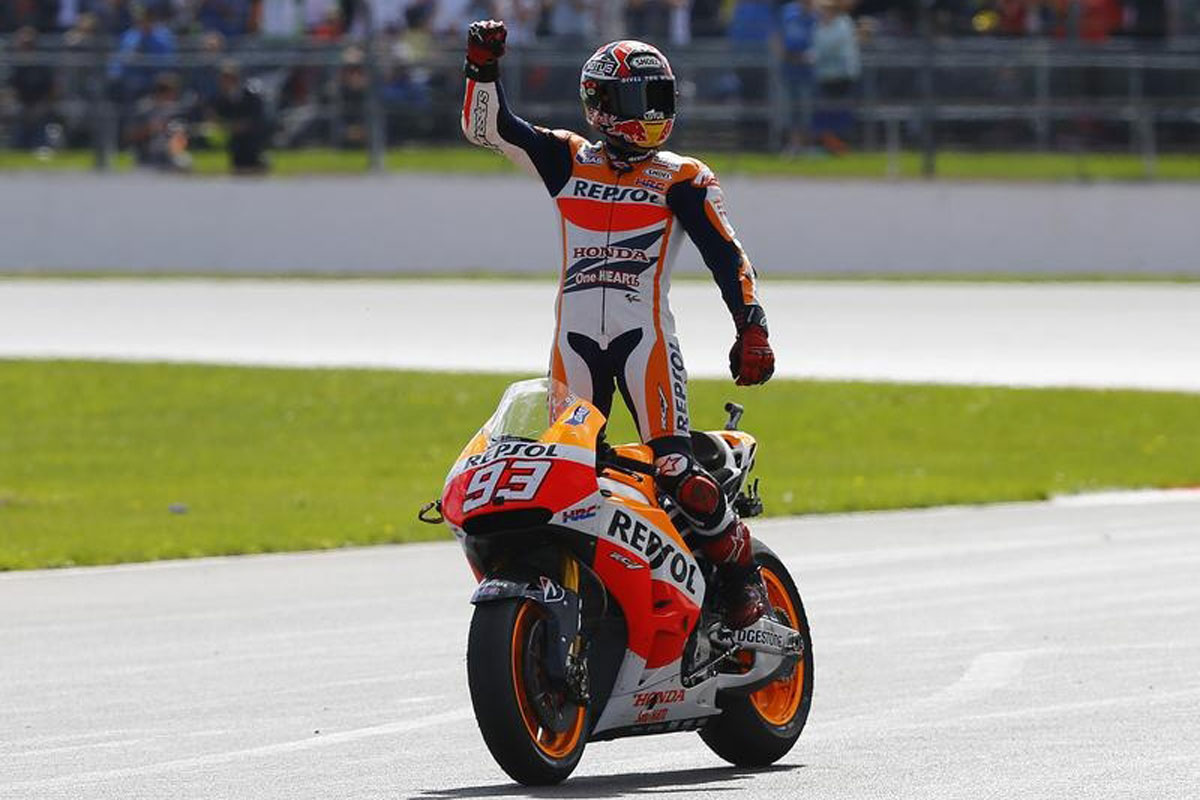 Reigning MotoGP champion Marc Marquez will seek a third straight Grand Prix win as he seeks to slash the overall deficit on his Yamaha rivals at the Czech GP in Brno on Sunday.

After 10 of 18 MotoGP races this year, Italian superstar Valentino Rossi leads the championship standings on 195 points ahead of Yamaha teammate Jorge Lorenzo of Spain with 186.

Marquez, the 2013 and 2014 champion, is third with 139 points following a lacklustre start into the season.

But the 22-year-old Spanish Repsol Honda rider showed his shape at Indianapolis last weekend, grabbing a second straight win after a battle with Lorenzo who finished second ahead of Rossi.

“Still we believe, but we must be honest. It will be really difficult,” Marquez said after the Indy race.

“We know that both Yamaha riders have a really good pace and if we want to beat them every race, or try to be ready to fight with them, we must work a lot, especially at some circuits.”

On the 5.4-kilometre circuit in the southern Czech city of Brno, “we will try to be concentrated from the beginning.”

Last year in Brno, Marquez failed to beat Giacomo Agostini’s record of ten straight Moto GP wins as he was demoted to the fourth spot in the race dominated by his teammate and fellow Catalan Dani Pedrosa.

“This isn’t one of my favourite tracks and I’ve had mixed results here in the past,” Marquez told the crash.net website.

“But we arrive there with good momentum and we will work hard to be ready for a battle.”

The 36-year-old Rossi had a fantastic start to the season, winning two out of the three opening races, and has made it to the podium in all ten races so far.

The nine-time world champion across all categories has scored five MotoGP wins at Brno, the last dating from 2009.

After Indy, the “Doctor” blamed poor qualifying for his failure to catch up with Lorenzo and Marquez, having started from eighth on the grid.

“We struggled too much in the practice and we arrive with a little bit too much of a delay before finding a good setting,” said Rossi.

“We have to work hard on this, starting from Brno.”

Closing in on Rossi in the overall standings after four straight grand prix wins earlier this season, is Lorenzo who last won at Brno in 2010.

“In theory Brno could be better than Indianapolis but we have to go there and feel and see what happens,” said the 28-year-old MotoGP champion from 2010 and 2012.

The Brno grand prix was on the verge of being scrapped from the MotoGP calendar over financial issues until a last-gasp deal in June helped keep it on the list at least for this year. – Agence France-Presse