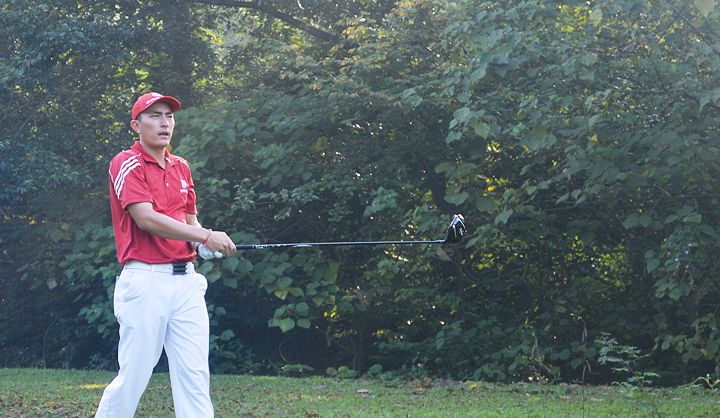 Overnight leader Danny Masrin stood tall amidst the windy conditions to sign for a battling even-par 72 and lead by one shot at the halfway stage of the ICTSI Sherwood Hills Classic on Thursday.

The 23-year-old Masrin, who held a two-shot advantage heading into the round, marked his card with five birdies against two double-bogeys and one bogey for a two-day total of four-under-par 140 at the Sherwood Hills Golf Club.

Guido Van Der Valk of the Netherlands returned with the day’s best score of 68 to sit in second place while local prospect Marvin Dumandan (70) and Janne Kaske (71) of Finland shared third on 142 at the US$60,000 Asian Development Tour (ADT) event.

Filipino James Ryan Lam, Lindsay Renolds of Canada, American John Catlin and Kasidit Lepkurte of Thailand were among those bunched a further shot back in fifth place at the wind-swept ICTSI Sherwood Hills Classic.

Despite failing to repeat his opening day heroics, Masrin was delighted to remain in control as he continues his search for a breakthrough win on the region’s burgeoning Tour.

“I started well. It wasn’t as windy on the front nine as compared to yesterday so that was an advantage for me. I made a couple of mistakes at the turn. I missed the green on the ninth and hit it into the bunker. I chipped it out but three-putted for double-bogey and I bogeyed 10 as well,” said Masrin.

Masrin looked poised for another good showing when he fired three birdies in his first eight holes but fell victim to costly double-bogeys on ninth and 14, as well as a bogey on 10. The young talent, however, redeemed himself with birdies on 15 and 18 to ensure his place atop the leaderboard.

“I told myself to try and recover from there as there is no perfect golf especially playing in such tough conditions. It wasn’t easy as it got windier on the back but I stayed patient out there. I will try and grab all the opportunities I have, keep the ball in play and stay patient again tomorrow,” added the young Indonesian, who joined the play-for-pay ranks in 2015.

Starting from the 10, Van Der Valk nailed four birdies against three bogeys to turn in 35. He dropped another shot on the third hole but recovered brilliantly when he birdied the fifth and closed out with three straight birdies.

“I made quite a number of birdies out there. It was easier this morning compared to yesterday as it was less windy. I was able to hit the ball close and I left myself with putts that were all within 15-feet. I am very happy with how I played today, especially the way I finished,” said the 36-year-old Dutchman, a former winner on the ADT in 2011.

A total of 57 players, including one amateur, made the halfway cut set at six-over-par 150 at the ICTSI Sherwood Hills Classic, which is the 11th leg of the 2016 ADT schedule and also the Tour’s second stop in the Philippines this season.

Like all other ADT events, the ICTSI Sherwood Hills Classic will offer Official World Golf Ranking (OWGR) points, which will be key for players vying to qualify for the Olympic Games in Rio de Janeiro this August.