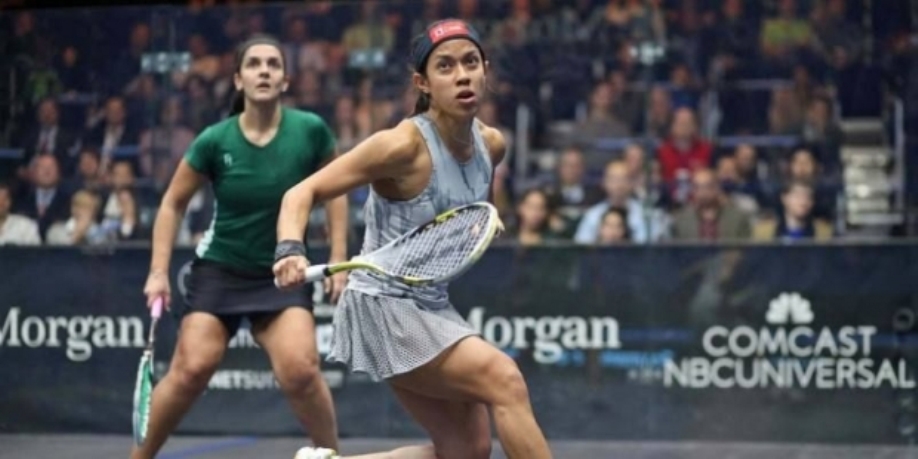 World champion Nicol David, hoping to revive her fortunes after taking only one title last year, survived a tough, tense battle to reach the semi-finals of the British Open, beating Omneya Abdel Kawy, the sixth-seeded Egyptian, 11-4, 12-14, 12-10, 11-2.

The record-breaking Malaysian’s tenacious effort happened shortly after another legend of the sport, Ramy Ashour, showed he has revived both his fortunes and an injury-wracked career which has seemed in danger of extinction.

The three-times former world champion from Egypt played his best match for a year and a half as he bounced and bounded around the court during an 11-8, 11-7, 9-11, 11-6 win over his compatriot Ali Farag.

David’s success hinged on her consistency getting her through a pivotal third game. During it Kawy’s tactical brain and deft front court skills gained her a 7-5 lead, which was followed by a brief moment when she seemed likely to earn a game point before an uncharacteristically ill-placed drop conceded a penalty point.

David converted that chance immediately and it changed the match. She romped athletically through the fourth game with evident relief, given plenty of support from a vociferous visiting group from Amsterdam, her adopted home city.

“I had to fight right to the end, so I am pleased – and I am very pleased to get all that support,” David said.

“It gives me extra energy to go out there and give it my all. I am feeling the energy from the crowd and I am putting it all out there.”

If David had to conquer repeated pressure of expectations, Ashour’s performance was all the remarkable for having come on to the court feeling “a bit stressed” because his taxi was late. It was almost the only time he arrived late for anything.

His movement was a revelation, both for a man who has had so many physical breakdowns over the last 18 months and for those who saw his shackled, excruciating first round performance against Cesar Salazar of Mexico in which he went two games down before scrambling through.

Many people thought they would never see an exuberant, explosive, resilient performance like this from Ashour again. He was asked if he had.

“In my head I thought so,” he said. “I have always been connected to squash mentally and spiritually.”

The big moments in the match were a volley nick return which first got him a lead, at 5-4 in the first game; the orthodox spell of line and length which got him to 9-6; and the freshly explosive movement which helped him get him to 8-4 in the second game, at which point it was clear that a near miracle was happening.

Then there was the mental reaction to losing the third game to the excellent, mobile, thoughtful Farag – hurtling to a rapid 5-0 lead, after which most people knew that Ashour, once apparently exiting the tour for good, was heading for a major semi-final again.

David now plays Nour Sherbini, the dangerous 20-year-old winner of the Tournament of Champions in New York, who reached the other semi-final in the bottom half with an 11-4, 11-7, 14-12 win over Amanda Sobhy of the United States in a repeat of the Grand Central terminal final.

Sherbini admitted that this win two months ago had helped a lot, and taking the first game in only seven minutes added physical momentum to her psychological advantage.

Sobhy made progress with more accurate attacks in the third game, and earned two game points which might have transformed the match, but Sherbini’s heavy driving and improved movement earned her a chance to reach the British Open final for a second time. – Agence France-Presse