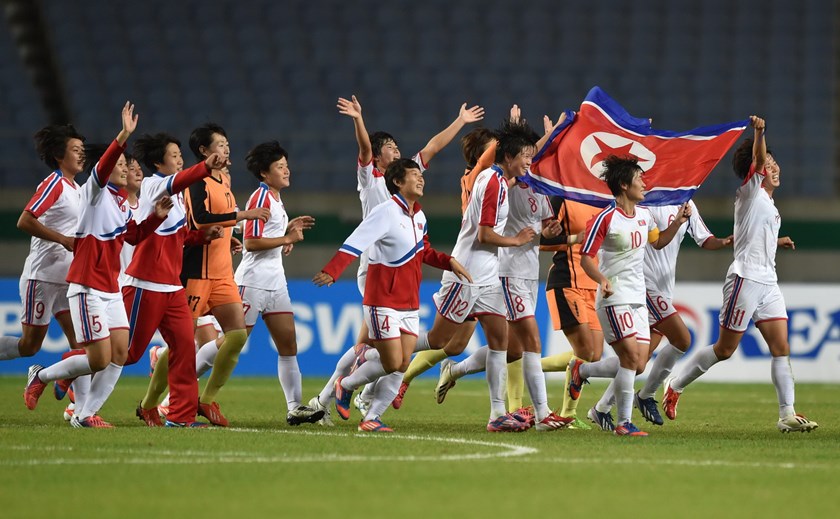 North Korea upset defending champions Japan 3-1 to win Asian Games women’s football gold on Wednesday — and again it was all down to leader Kim Jong-Un for sharing his wisdom.

Kim Yun-Mi, captain Ra Un-Sim and Ho Un-Byol were all on target as the North Koreans totally outplayed World and Asian Cup holders Japan to avenge their loss in the final four years ago.

The North’s players squealed with joy, some bursting into tears, at the final whistle as around 60 of their flag-waving comrades in official tracksuits hopped with delight in the stands.

After the match, their coach dedicated the gold to North Korean leader Kim, a big sports fan who is reportedly ailing.

“This was an inevitable result as the North Korean players trained with dedication and never stopped fighting to return the warm love of our dear leader Kim Jong-Un, who watched over us” Kim Kwang-Min told reporters.

“Our respected leader visited our training camp on July 11 and gave the team valuable instruction on how to win the gold medal at the Asian Games. This victory reflects the boundless feelings of the players for our dear leader.”

South Korean fans chanted support for their neighbours from north of the border throughout, many waving unification flags showing the Korean peninsula in blue on a white background.

The North’s players sprinted over to the main stand after a celebratory team hug and unfurled their country’s flag as thousands of local fans seated behind huge unification banners with the same design serenaded them with: “We are one!”

At the medal ceremony, local fans and the delirious North Korean delegation continued to chant the same mantra to each other from opposite sides of the pitch.

“When our team was being cheered on by South Korea I felt we are one nation,” said coach Kim. “We are all brothers and sisters. I could sense a feeling of Korean unification.”

They produced a moment of true class to double their lead seven minutes after the interval, Ra latching on to a long diagonal from Jon Myong-Hwa to finish with a clinical right-foot shot.

Japan skipper Aya Miyama pulled one back with a low drive moments later but substitute Ho — who scored the winner in the semi-final — added a third for North Korea three minutes from time with a bullet header after another lightning counter attack.

The triumph could net the players a windfall as the communist North has rewarded athletes with cars and apartments for international sporting success, for which they always praise the country’s leader.

“I have to congratulate North Korea,” said Japan coach Norio Sasaki. “They were well organised and their teamwork was excellent. It was a learning experience for us tonight.”

Japan beat North Korea 1-0 in the Guangzhou final four years ago after the North won a penalty shootout between the teams in the 2006 gold medal game in Doha. – Agence France-Presse