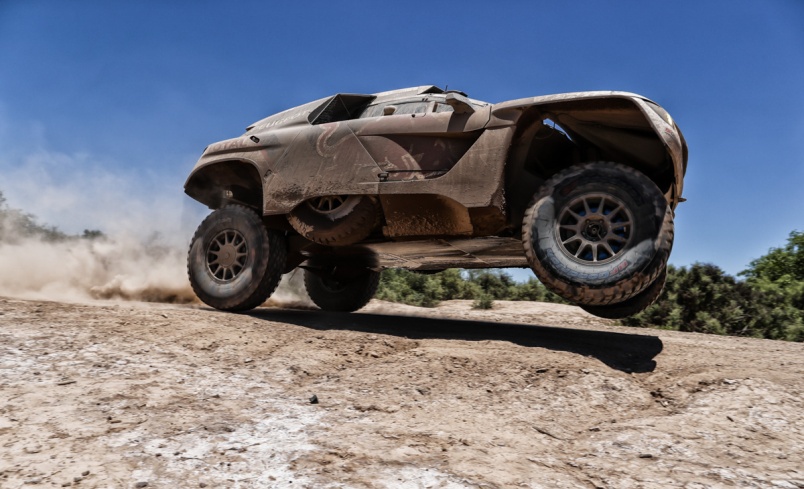 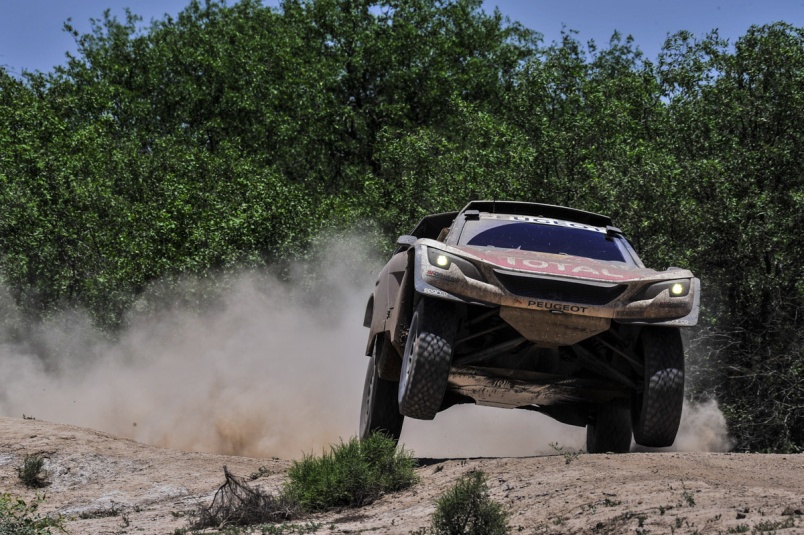 After a cautious start to the 2017 Dakar Rally on Monday, Sébastien Loeb hit the ground running on Day 2 to win the event’s second stage which formed part of today’s run from Resistencia to San Miguel de Tucuman. The Frenchman’s PEUGEOT 3008DKR has gone straight to the top of the provisional leaderboard as a result.

Sébastien Loeb and Daniel Elena revealed their determination by posting the fastest time up to today’s first Passage Control, and they continued to set the pace over the remainder of the 275km test. Their victory has taken them 28 seconds clear at the top of tonight’s standings.

The 2017 Dakar Rally’s second competitive section was essentially a high-speed affair which enabled the aerodynamic changes to the 3008DKRs to reveal their value as Loeb’s team-mate Carlos Sainz completed the distance in third place.

Stéphane Peterhansel and Cyril Despres had a tougher day, however. Cyril lost the antenna of his Sentinel system which warns drivers ahead of him on the road that he is close behind, while Stéphane had to cope with an unfavourable running order.

Bruno Famin
“Sébastien and Daniel produced a polished performance despite the complexity of today’s stage which was also quite dangerous. Competitors had to contend with dust, too, and it’s always preferable to be first on the road in conditions like that. Cyril and Sébastien both dropped time in other drivers’ dust towards the end. Cyril took it cautiously because of his Sentinel issue which was a big handicap. All four 3008DKRs went well. This is our first fastest time this year but the gaps – in Dakar terms – are really very small.”

Sébastien Loeb (PEUGEOT 3008DKR #309)
Leg 2: 1st / Overall: 1st
“That was a really fast stage but not very interesting from the driving point of view. There were lots of long straights, with a turn from time to time. That said, everything went well for us. No issues at all, apart from having to spend the last 70 or so kilometres in the dust of De Villiers who was ahead of us on the road. That cost us some time but it’s no big deal. At least we are in the lead now and today’s terrain wasn’t at all like what’s coming later. We were able to live with the heat and I even switched the air conditioning off at one point to benefit from a little more power.”

Carlos Sainz (PEUGEOT 3008DKR #304)
Leg 2: 3rd / Overall: 3rd
“We had a good day. I didn’t take any risks and my only problem was a warning which stayed on for the entire stage. Thanks to the air conditioning system the heat wasn’t an issue. I used it from start to finish.”

Stéphane Peterhansel (PEUGEOT 3008DKR #300)
Leg 2: 7th / Overall: 7th
“That was quite hard work. There was little proper driving to do but there were a few spots where you needed to brake hard from 200 to 50kph. We dropped a big chunk of time in the dust of other cars this morning but we ’re okay and our 3008DKR ran like clockwork. Tomorrow we will start to climb in altitude and the navigation is likely to become more complex. We intend to take our time and try to move gradually up the leaderboard. Sébastien and Daniel did a sound job. They are clearly competitive, but that’s not really a surprise.”

Cyril Despres (PEUGEOT 3008DKR #307)
Leg 2: 12th / Overall: 11th
“After we lost our Sentinel antenna, we decided to take it easy. Over the last 40 kilometres or so, we had no way of warning the bikers we were coming up behind them, so we spent quite a lot of time in their dust. We managed to find a way past some of them, but without taking any risks. The track was twisty and there were logs from time to time which prevented us from overtaking. Being 10 minutes down at this stage isn’t the end of the world. What we’ve seen so far is very different to what lies ahead. The Dakar is an event that needs to be viewed as a whole.”