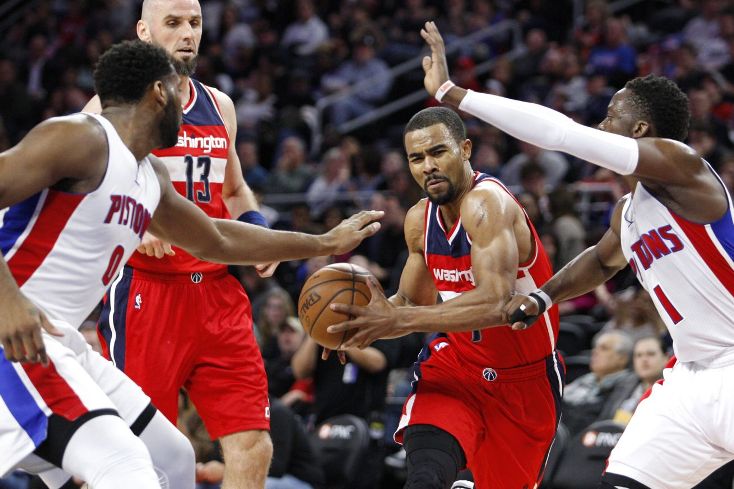 Point guard Reggie Jackson wouldn’t let Detroit be denied, scoring 39 points in a 112-99 triumph over the Washington Wizards that saw the Pistons clinch their first NBA playoff berth in seven seasons on Friday.

Tobias Harris had 17 points and pulled down nine rebounds for the Pistons, who squandered a 19-point lead before ending the longest post-season drought in the Eastern Conference.

“We’ve got four starters who have never been there. It’s a great milestone for them to get in. Obviously, we hope this is just the start of bigger things to come but you’ve got to start somewhere and this is it.”

Kentavious Caldwell-Pope contributed 14 points and Marcus Morris chipped in 13 for the Pistons, who will make their first post-season appearance since the 2008-09 season.

All-Star Andre Drummond, who scored his 4,000th career point, was limited to eight points and six rebounds for the Pistons, whose victory officially extinguished the playoff hopes of the Wizards.

Washington didn’t go down without a fight.

Markieff Morris led the Wizards with 29 points. Bradley Beal added 25 for a Washington coping with the absence of All-Star guard John Wall, who missed a second straight game with a sore right knee.

The Indiana Pacers missed a chance to lock up the last playoff spot in the East, falling 111-98 to the Raptors in Toronto.

“They came out and played harder than us,” said Indiana forward Paul George, whose Pacers will still advance with one more win or a Chicago Bulls defeat. “There is nothing else to say.”

Elsewhere in the tightly bunched Eastern Conference, it was all about jockeying for position.

The Boston Celtics moved into a tie for third with a 124-109 thrashing of the short-handed Milwaukee Bucks.

Both the Celtics and Atlanta Hawks are a game ahead of the Miami Heat and Charlotte Hornets with Boston due to visit Atlanta on Saturday before hosting Charlotte on Monday and Miami on Wednesday.

The Heat fell into a tie for fifth with Charlotte thanks to a 112-109 loss to the long-eliminated Orlando Magic, but could still finish anywhere from third to sixth with only the top four teams gaining home court advantage.

The Hornets are assured of finishing no worse than sixth after a 113-99 victory over the Brooklyn Nets, and could also still break into the top three.

“It’s going to come down to the wire,” said Charlotte’s Marvin Williams. “Guys are really competing for home-court advantage.”

In the West, the Dallas Mavericks edged closer to a playoff spot with a 103-93 victory over the playoff-bound Memphis Grizzlies.

Dirk Nowitzki scored 21 points to lead the Mavs to a sixth straight win. They are seventh in the West, just one game behind the reeling Grizzlies and two games in front of the Utah Jazz, who remained in eighth — one game ahead of Houston — despite falling 102-99 in overtime to the short-handed Los Angeles Clippers.

The San Antonio Spurs, assured of the second seed in the West, weren’t worrying about playoff position in Denver and coach Gregg Popovich rested every starter but Tim Duncan a night after the Spurs fell to the Golden State Warriors in Oakland.

Duncan finished with a season-high 21 points, but the Spurs fell 102-98 to the Nuggets, who snapped a 10-game losing streak.

The Spurs lost two straight for the first time this season, a trend they’ll try to reverse when they put their perfect 39-0 home record on the line on Sunday in their last regular-season clash with the mighty Warriors. – Agence France-Presse