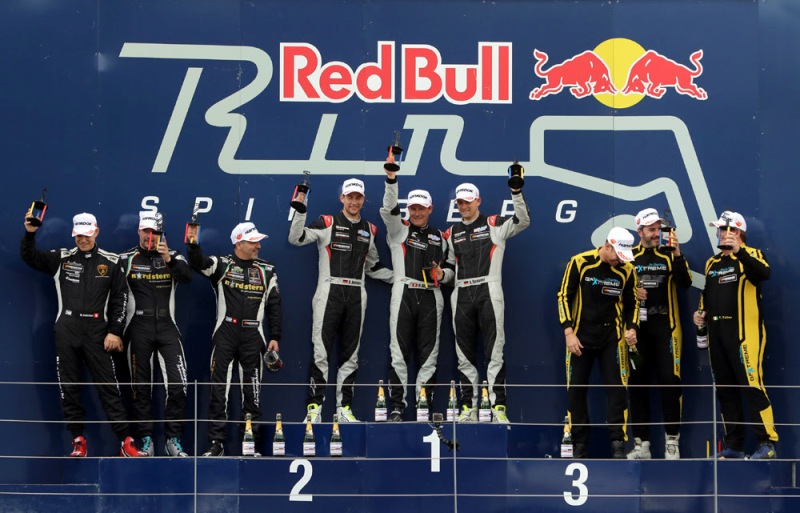 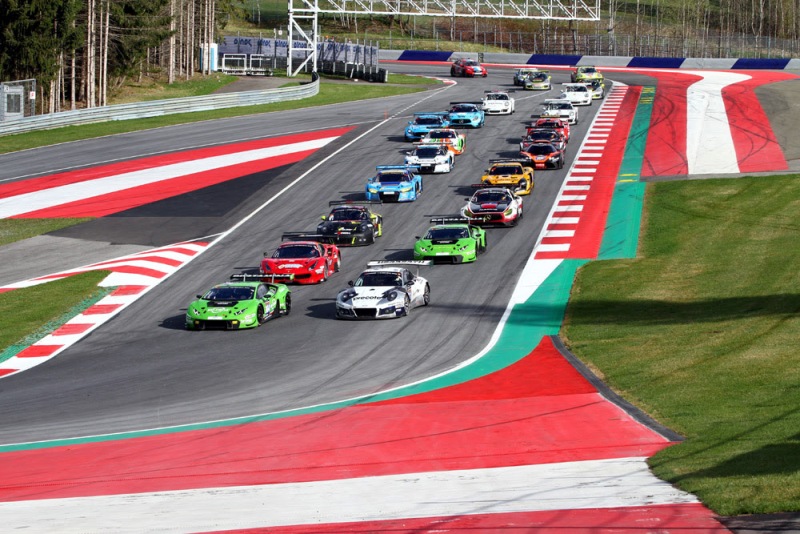 P2 in the general classification and a win in the Pro-Am class with the Lamborghini Huracan GT3: The 12hour race of the Creventic Series brought a pleasant result for the Grasser Racing Team at their local race track, the Red-Bull-Ring, which made it a bit easier to overcome the retirement of the Pro-car, which that been in the fight for an overall win for a long time.

It was a very special weekend for Mark Ineichen, who took the wheel in both cars. Actually, the Swiss was mainly meant to race the Pro-car number 964 together with his brother Rolf and Christian Engelhart.  But after its retirement due to an engine failure with about five hours to go he also jumped into car number 963. „ In the 964 you could really go flat out, in the 963 in Pro-Am I had to concentrate more on not beating the set laptime of 1:34.

Of course there you can then go with 20 more litres of fuel and do longer turns, one and a half hours instead of one hour. That needs quite a bit of stamina, but I always trained very well for my races. But I have to admit going flat out in the Pro-car was more fun.” But finishing on the podium was of course a great achievement fot the 45-year-old who races since 15 years – even if it turned out to have some unwanted consequences:  “In the end, it was a costly race – as I lost a tooth on the podium. While celebrating my teammate Christoph Lenz turned around with his bottle of champagne and took out one of my teeth with it.”

Christoph Lenz himself was ever so content about the result, to which also Milos Pavlovic and Roberto Pampanini contributed: “Together with Milos I really worked hard on Austrian track, which for me was a new one, both in the simulator and through video studies. So already during the test session on Thursday we were able to deliver some really good laptimes. The crew around our race engineer Daniel Weber did a great job. It´s really good fun to work with these guys.” One of the key factors for the top result probably was being able to lap the Hofor-Mercedes during the first part of the race in the rain on Friday: “That gained as some space to the competition behind, so we could concentrate on our own pace.

Also, we did not suffer from any mistakes or incidents until the last stint. During the last stint the Hofor-Mercedes kicked us out in turn 6. Afterwards I struggled a bit about concentrating and as a result made a mistake under breaking in turn 4. Fortunately, non, of these incidents caused any damage to the car. The last code 60 helped us a bit in terms of fuel, so in the end we had quite a comfortable advantage on our main competitors, the Renault and the Hofor-Mercedes.  Many thanks to the team for the great work! We are very proud of having been able to represent the Lambo colours on the podium at the home race of the GRT Grasser Racing Team.”

A lot of bad luck hit the Pro-car number 964: “The weekend already started with technical problems which meant that that we nerly lost the whole test day”, Rolf Ineichen stated. “With a huge, effort the crew managed to repair the car in time, so that we could at least do one test run on Thursday evening.” Starting from P2 on the grid, things seemed to be going perfectly well and according to plan in the first part of the race. “The whole team again did a great job. You just have to have a look at the pitstops.

The guys managed to change all four tyres in less than ten seconds. That alone is a fantastic performance.” Due to a perfect strategy, the Lamborghini Huracán finished the first sector of the race in P1, “and at the re-start after the break things again went the right way and we were able to fight for an overall win. So, it was even more disappointing that we had to retire the car due to an engine failure. I feel especially sorry for the crew. The performance of the guys had been unbelievably impressive again. But we won´t give up and keep on fighting for the long-waited success.”

His teammate Christian Engelhart also emphasized the fantastic performance of the Grasser squad: “Regarding strategy and pitstops the team really did a great job. Even having to put up with a rather visible deficit in top speed we were able to fight for victory until our retirement. Now we have to focus on the future challenges.”

Team principal Gottfried Grasser agrees: “For us it was a weekend with a lot of ups and downs. I am really happy for the guys of car number 963 with Lenz, Pampanini, Pavlovic and Ineichen, who were able to celebrate their greatest success in the Creventic Series. But, of course the broken engine in the 964 was a real pity. Until then it was a great fight with the Porsche, we really had the speed and were able to fight, until we were let down again technically. But in two weeks time there is the start of the Blancpain Endurance Series, which we are really looking forward to!”