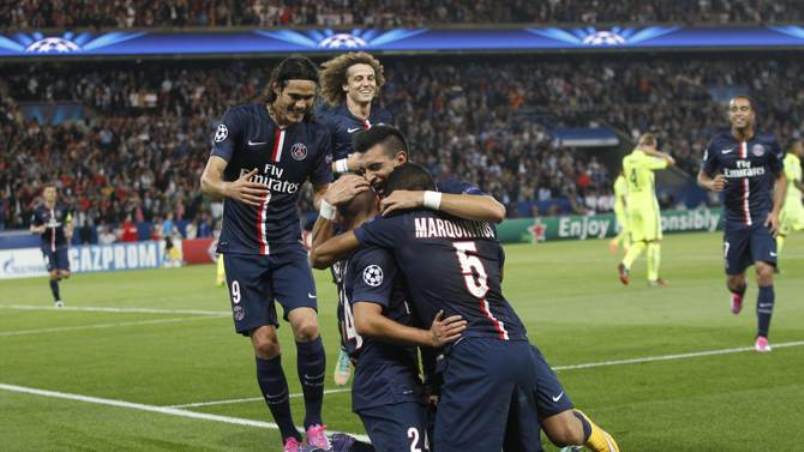 Paris Saint-Germain will get the chance to celebrate winning the French title in record time when they play host to second-placed Monaco at the Parc des Princes on Sunday.

PSG became the earliest champions in French football history when they wrapped up a fourth consecutive title with eight games to spare last weekend, inflicting a pitiless 9-0 defeat on bottom side Troyes in Champagne country.

That left Laurent Blanc’s side a scarcely credible 25 points clear of their nearest ‘challengers’ Monaco at the summit and removed much of the edge from their meeting with the principality club in the capital.

However, PSG will be eager to prove the gulf in class that separates them from the rest of the country as they defend an unbeaten home record in the league going back to May 2014 and close in on beating their own record for the most points in a Ligue 1 campaign.

The game is a vital one for Monaco, however, with Leonardo Jardim’s side just five points ahead of Cote d’Azur rivals Nice in the fight for second and automatic Champions League qualification.

Monaco have lost just one of their last 17 league games but have drawn their last three, allowing PSG to clinch the title and the teams below them to retain hope in the process.

Nevertheless, Monaco will hope PSG — who are expected to be without Marco Verratti until mid-April because of a hernia — take their eye off the ball now that the championship is secure.

“It can make a lot of difference – for PSG. The players might relax a bit or could play even better. I think we’ll see a slight change,” Nigerian defender Elderson Echiejile told Monaco’s website.

Nice are at home to relegation-threatened Gazelec Ajaccio on Sunday and by then they may have lost third place to Lyon, who entertain Nantes on Saturday.

A run of one defeat in seven games has revitalised Lyon, although they were held to a 2-2 draw at Rennes last time out.

Rennes, in fifth, are also right in contention for Champions League qualification and travel to Marseille on Friday hoping to extend their hosts’ miserable record of not having won in 12 league games at the Stade Velodrome.

OM, who have drawn their last five games and continue to languish in mid-table, could be about to see Abou Diaby finally make his debut, eight months after returning to French football.

“Right now all the lights are on green and I am ready to play. I have never been so close to a return. I feel good,” said the injury-jinxed former Arsenal midfielder, who has not played since late 2014, this week.

Diaby, who said he hopes to stay beyond the summer when his contract expires, added: “My wish is to be in the squad and that we can get a victory. I want to experience the fervour of the Marseille support.”

Willy Sagnol was sacked by Les Girondins on Monday in the wake of a 4-0 defeat at Toulouse which left them five points clear of the relegation zone.

“I have spent nearly 20 years here. The club has given me a lot so I would like to give some of that back,” said Rame, who won two league titles during a long and successful spell as a goalkeeper for Bordeaux.