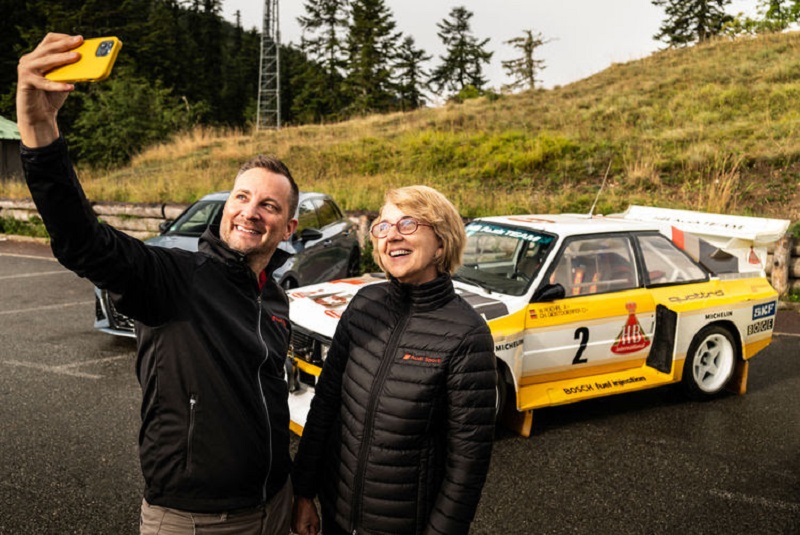 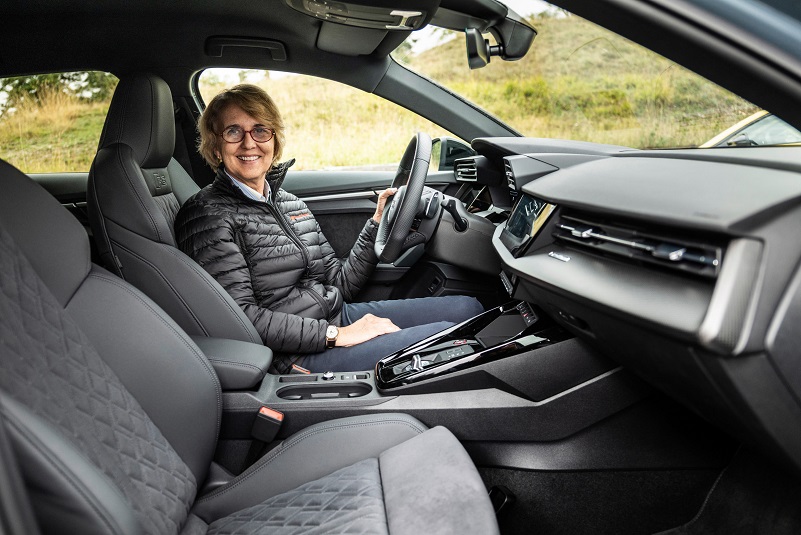 They are historic venues for the international rally scene and they have close ties to Audi: the Col de Turini as a stage of the Monte Carlo Rally and San Romolo as a very crucial point of the asphalt special stages of the Rallye Sanremo.

Thanks to the quattro and the five-cylinder, the company with the four rings drove from one success to another in the 1980s. It was an era that established the legend of what was then Audi’s revolutionary drive concept and technologies that define the Audi DNA “Vorsprung durch Technik” to this day. Fabrizia Pons, co-driver for Audi factory driver Michèle Mouton in the 1980s, and Sebastian Grams rhapsodize about the old days and look forward at the possibilities that the quattro and the five cylinder offer today and in the future.

Fabrizia Pons, you were both a driver and a co-driver on the international rally stage. Which was more exciting for you?

Fabrizia Pons: I actually started as a driver in 1976 and I won in my class too. But despite that, I couldn’t find a consistent cockpit in the group 2 category. During that period, the opportunity came up to ride as co-driver with Luigi Battistolli, also known as “Lucky”, who was a very successful Italian driver at the time. So my name turned up not only in Italian newspapers after winning in 1979 and 1980, but also in the press across Europe. That’s how Michèle Mouton noticed me. Of course, it also helped that I could read the pacenotes – meaning the notes for each corner – in French.

Rally drivers say that the brain sits on the right, which is to say in the co-driver’s seat. Is that true? And what role did the Audi quattro play in that?

Fabrizia Pons: It depends. During special stages, like in the world championship rallies, the driver is the most important part of the crew. But if we’re talking about long-distance competition like the Dakar Rally, which is about pure navigation, then the co-driver actually is the brain of the team. In 1981 and again in 1982, it was generally hard to beat the Audi quattro; we came just short of the world champion title in 1982. But I did get the Halda Trophy as the world’s best co-driver, which was a really great honor for me. To win, you need not only the best car, the best crew, and the best service team, but also a little bit of luck – everything has to interlock perfectly. 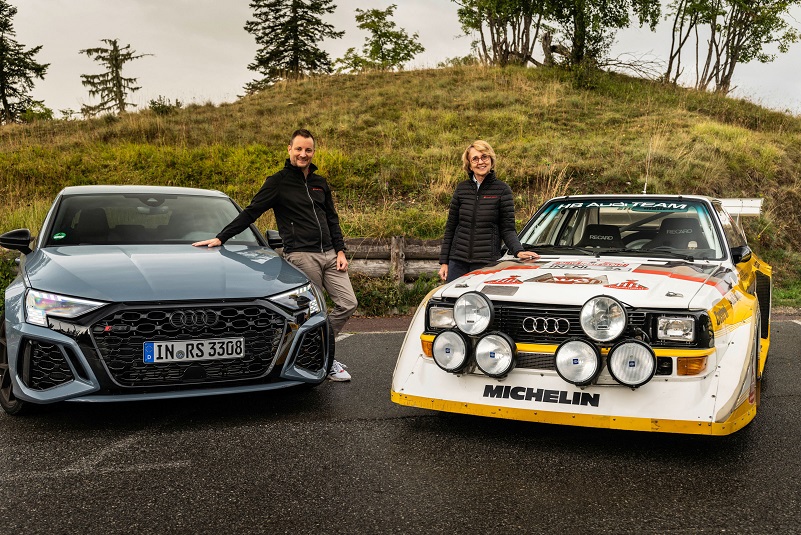 Sebastian Grams, Fabrizia Pons became vice-world champion with Michéle Mouton in 1982. In your opinion, what was the decisive factor: the talent of the two of them or the performance of the Audi quattro?

Sebastian Grams: Definitely both. The entire team’s performance also played an important part. As Fabrizia said, along with the optimal product, team spirit also plays a crucial role. Even today, that’s what puts us at the forefront of the transformation of the company and of Audi Sport GmbH. Our goal is to sustainably, progressively, and digitally shape the future of mobility in the high-performance segment. We’re really passionately working on that as a team. Today, we can only use the quattro as an example, specifically by having the courage to blaze new trails, pooling our resources, developing sustainably, and intently and tenaciously seeking the best. For designing the mobility of the future, that is still in demand today.

What constitutes the quattro mythos for you two?

Sebastian Grams: Quattro technology is one of Audi’s fundamental pillars. The successes from back then are invaluable for the quattro of today and for the position of the entire Audi brand. I worked on drive system development myself for a long time and we’re proud to transfer the heritage of what was then revolutionary drive technology into a new era of automobiles with all the benefits that our customers appreciate around the world. Those victories and titles have stood the test of time and not only established the charisma of the quattro drive system, but also symbolize our thinking and Audi’s genetic makeup. The quattro is setting the pace in e-mobility. With the RS e-tron GT3, we’re making a passionate statement about something special, something individual – just like the quattro did back then. Its traction is unbelievable and no one will be indifferent to it – for us, that’s also a milestone in a new age of fully electric high-performance. We’re speaking to both our tradition-minded regular customers as well as potential new customers with that.

Fabrizia Pons: The quattro drive system has never lost its grip on me. It has been a positive influence on my career and my life. I am happy and grateful to be a small part of that myth. I came to Audi when the quattro was driving its first kilometers. I’ve been able to witness the concept’s development from the start up to the S1. For me, it’s been a gift to see how well and how energetically Audi has developed and propelled that concept and stayed on its path without wavering. Driving in a team for five years is like living in a big family. As a German team, Audi was very disciplined. I brought in a dash of Italian flexibility. Over the years, it was a fascinating and, above all, a successful mixture.

Fabrizia Pons, to what extent did you participate in the technical development of the quattro drive system in particular back then?

Fabrizia Pons: In the beginning, we did a whole lot of tests. After that, we participated in a whole lot of rallies, which helped make the quattro better and better. Today, I’m proud that we contributed to the fact that Audi has taken many components and insights from rallying and used them in quattro series production. There were only a few manufacturers who had enough courage and tenacity to make that technological transfer so consistently.

What do you both remember about the track at the Col de Turini and in San Romolo?

Fabrizia Pons: I have a lot of nice memories, especially of the Col de Turini. The fans were often there two days before the rally so they could occupy the best seats. It was always a huge party, a real happening. I’ll never forget the scenery, when we drove past the fans on the stage. That was unbelievable! It was an enormous challenge to choose the correct tires for the Col de Turini. During the 22 km stage, going from Moulinet to La Bollène, we were facing all sort of conditions, from asphalt, to snow, to ice. San Romolo is the heart of the asphalt stages of the Rallye Sanremo. I love that rally and have the best memories of it. I know every centimeter of the Ligurian hinterland. It’s a wonderful place – partly because we won the rally for Audi there in 1981.

Sebastian Grams: I wish I could’ve been there then! I used to watch the rallies on television with a lot of excitement as a small boy in the late 1980s. Walter Röhrl is still a god to me, even today. We want to rekindle that particular atmosphere with our event and transfer it to the future of mobility with our electric models. The electric quattro can show its strengths best on that track with those curves. I can’t imagine any better terrain to prove the outstanding performance of the new five-cylinder.

Is the quattro ageless?

Sebastian Grams: Absolutely. With its high-performance cars, Audi Sport grew out of the quattro brand. Quattro was the root of everything. For ages now, every RS model has come with our permanent all-wheel drive as a standard feature. Only the R8 has an option for a rear-wheel drive variant. Now, electromobility is opening up whole new dimensions in driving dynamics for us – for instance with fully variable torque distribution in the quattro drive system with electric torque vectoring in the e-tron S4/5.

Fabrizia Pons: For me too, there’s no question: the quattro is ageless. I’m glad and I’m impressed with what has come of the progenitor from that era for customers around the world today – namely a fascinating piece of technology. For me as a rally driver, the combination of dynamics and safety is unique. I think it’s particularly impressive that Audi transferred quattro technology into electromobility and keeps making it better and more efficient in the process. 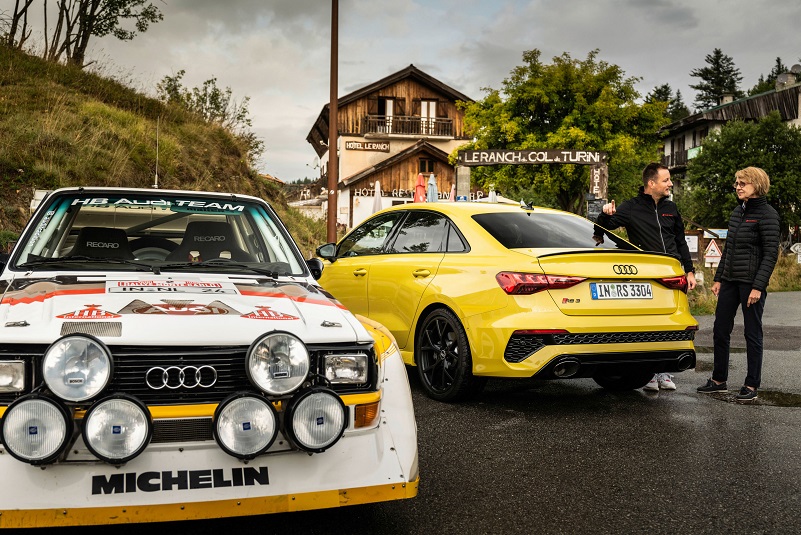 Changing the subject: One of the stars of the event is the new RS 31/2 with a reworked five-cylinder engine. What memories and what kind of expectations do you connect with that engine?

Fabrizia Pons:  For me, the five-cylinder is a very emotional engine. On the rally tracks of the world, it has given us critical seconds with its power and responsiveness through a great many special stages. Not to mention the sound. It’s distinct. I look forward to hearing it even now!

Sebastian Grams: Fabrizia is completely right. The sound of that engine is unmistakable. It’s music to my ears. But of course it’s not just the acoustics that are so enthralling.In combination with the 400 PS five-cylinder engine, the compact sports car is supremely agile. The RS 31/2 sprints from zero to 100 km/h (62 mph) in 3.8 seconds and reaches a top speed of 290 km/h (180 mph).With the torque splitter in the new RS 31/2, we’ve added a quattro ingredient to the already optimized 2.5 TFSI. Combined with the active torque distribution to the rear axle, that brings the lateral dynamics to a new level. Fabrizia and the journalists who are there will see that. The RS 31/2 will definitely stir memories of the original quattro.

Why are quattro and five-cylinder technologies so important for the brand?

Sebastian Grams: The superior traction of four powered wheels developed into an Audi trademark and it underpins the brand promise of “Vorsprung durch Technik.” That also applies to the five-cylinder, which took Audi off the beaten path. We ask ourselves every day: What do our customers want? For me, it’s a matter of a mindset or outlook. That also includes courage to blaze new trails and to always go a bit further – like back then, with the quattro and the five cylinder. We will surprise and excite our customers again and again in the future with new, innovative products.

Fabrizia Pons: With all-wheel drive and the five-cylinder, Audi opted for completely new and unique solutions at the time. When I look back, it was a very good idea and a courageous decision. Audi pursued this revolutionary path despite all the doubts that other people brought from the outside back then. The company with the four rings also had a sense of the needs of drivers who don’t just want to go from A to B, but for whom a dynamic and safe driving experience is increasingly important.

Why are events like the ones at the Col de Turini and in San Romolo important?

Sebastian Grams:  Events like that bring yesterday, today, and tomorrow together in a way that is hopefully unforgettable and establish our developmental milestones in the scene: quattro, five-cylinder, and the newest stages of evolution in the electric quattro drive system – which combines the best traction with sustainable mobility.

Fabrizia Pons: Like Sebastian said, it’s becausethey convey history. The Col de Turini and San Romolo each give off a particular aura, which I really look forward to. I’m also looking forward to the driving and the discussions about fuel and about Audi’s electric models, which I’m not familiar with yet and I’m very excited about those. I can hardly wait to see the e-tron models in person and, of course, the new RS 31/2 as well – and finally to drive them.