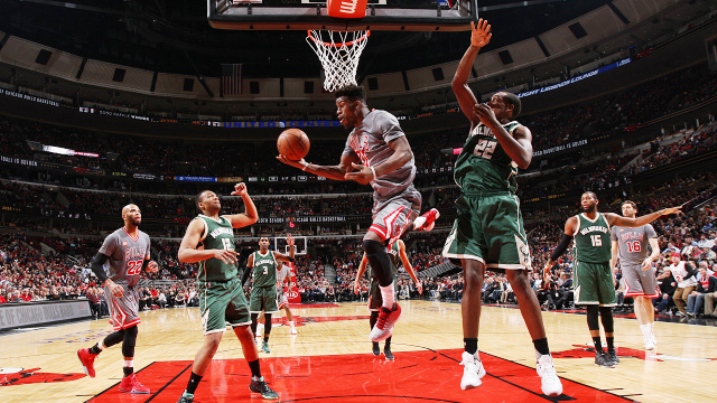 Jimmy Butler scored 32 points as the Chicago Bulls stretched their winning streak to a season-high five games with a 117-106 victory over the Milwaukee Bucks on Tuesday.

The Bulls opened the first quarter on a 10-0 run and never trailed, despite the Bucks pulling to within one point twice in the game in front of a crowd of 21,600 at the United Center arena.

Butler, who was coming off a 42-point performance against Toronto on Sunday, continued to have the hot hand on Tuesday.

He scored 12 points in the first quarter and had 20 points by halftime.

Butler shot 11-of-21 from the field, eight-of-eight from the free-throw line and dished out 10 assists on the night.

“I am used to playing with talent, USA Basketball, the select team. The way Jimmy is playing now is unreal and it is fun to watch,” said Bulls guard Derrick Rose.

The Bulls improved to 21-12 on the season and have scored 100-plus points in their last eight games.

Butler said they have started to really believe in each other.

“We got a real good team,” said Butler.

“But if we don’t play for one another, don’t stick together, we’re not a really good team.”

The Bucks have struggled away from home all season and dropped to 5-16 on the road. They also lost at home to the San Antonio Spurs on Monday.

Rose, who had missed the previous three games with right hamstring tendinitis, returned to score 16 points on eight-of-17 shooting and six assists.

The Bucks twice pulled to within just a single point. The final time occurred when they got to 90-89 with just under a minute left in the third quarter.

The Bulls closed the quarter on a 5-0 run and then outscored the Bucks 23-17 in the fourth quarter.

The Knicks nailed down the win with 18 seconds remaining, when Jose Calderon scored on a driving layup. They allowed the Hawks to get within two points after building a 16-point lead earlier in the contest.

The Knicks have now won two straight and three of their last four.

Afflalo, who scored 38 against the Hawks on Sunday, shot nine-for-16, including two-for-two on three-pointers. He added seven rebounds and four assists. Anthony made eight-of-22 with 11 rebounds and seven assists.

Deron Williams rattled in a three pointer from the corner at the buzzer to lift the Dallas Mavericks to a 117-116 win over the Sacramento Kings in double overtime.

Williams game winner capped an 8-0 run for the Mavs at American Airlines Center.

The Mavericks ended a two-game losing streak and beat the Kings for the 22nd straight time in Dallas.

Guard Klay Thompson scored 36 points and Stephen Curry tallied 17 before heading to the locker room with a recurring leg injury as the Golden State Warriors beat the Los Angeles Lakers 109-88.

The reigning league MVP Curry took another blow in the third quarter Tuesday on his sore left leg that kept him out of two games last week. He missed all of the fourth quarter on Tuesday.