Home 2022 Richard Lee in class of his own at International Series Morocco Round... 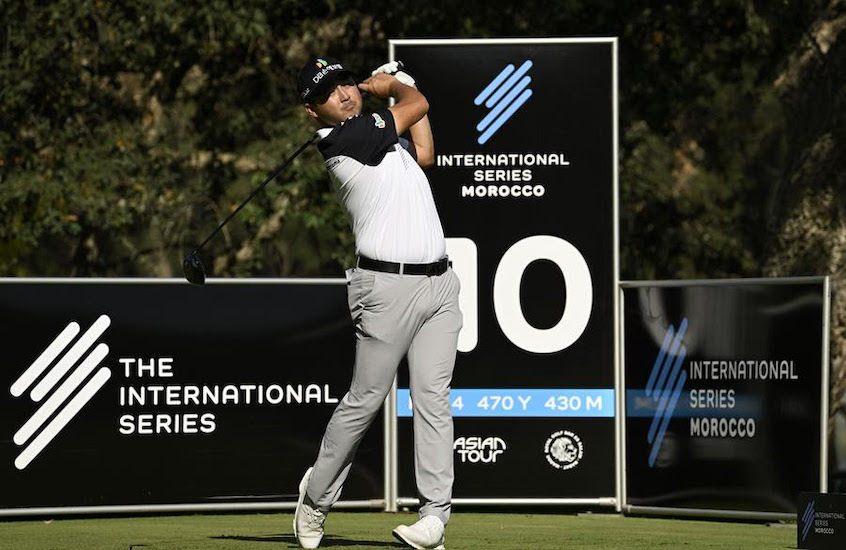 The famous venue’s Red Course once again provided a stern test, but Lee impressively rose to the challenge making an eagle and six birdies to move to nine under par for the US$1.5 million event. He was one of only five players to break 70.

Thailand’s Nitithorn Thippong returned a 72 and is in second place two back, while Australian Scott Hend and Spaniard David Puig are a stroke further behind after carding 69 and 70 respectively.

Lee eagled the par-five fifth, made three birdies in a row from the 10th, birdied 18 and missed numerous chances, including nearly holing out for an eagle on the sixth, to go even lower.

“I think definitely the fifth hole when I made the eagle that kind of made me pumped up a little bit,” said Lee.

“You just need to hit the fairways out there and that’s key on this course. I didn’t really like hit my drivers high, I tried to hit my low Stinger drivers just to make the fairways and from there it’s easy.”

He spent four days in Dubai before this week to acclimatize and adjust to the time zone and it has clearly paid dividends.

He said: “Oh, definitely. I mean, I know a few people that just came in from Korea and from the US as well, and definitely the jetlag is hitting them pretty hard. Yeah, I went to Dubai for three, four days, just practiced with a few friends of mine at the Emirates Club and the Els Club. Yeah, it was good practice.”

The 32 year old is a two-time winner on the Asian Tour but has not tasted victory since claiming the Shinhan Donghae Open in 2017. But the signs have been there this year that his A game is coming back, particularly when he finished joint second in the International Series Singapore in August.

Nitithorn, whose nickname is “Fever”, has already won twice this year and is clearly hot for more success although he wasn’t satisfied with his performance today.

“I had a frustrating day,” he said, who started the day in a share of the lead with Lewton.

“I started not so good with a bogey on the eighth, my first hole. I don’t know, I didn’t play so good today but made a lot of up and downs. But I missed a lot of birdie opportunities also.

“I’m still happy with the result today, I mean I was really focused on my game.”

The 26 year old won The DGC Open presented by Mastercard in March for his maiden success on the Asian Tour and in August triumphed in the International Series Singapore. He sits in third position on the Tour’s Order of Merit.

Like all the competitors this week he is treating the Red Course with a lot of respect.

He said: “Oh, for me it’s a little tough. It’s got a lot of bunkers on the side of the fairway, and you have to drive it really straight in the fairway. You’ve got to keep the ball in the fairway to make the next shot easy, because the rough is really thick and it’s like a sponge. I don’t really know how to hit it from the rough.”

He made three birdies and two bogeys to help put him in strong position heading into the weekend.

“It has been a good two days, I did a lot of things very well,” he said.

“Just trying to stay present and engage each and every shot. I had a really good group to play with today. Kiradech (Aphibarnrat) is someone I have looked up to for a very long time. That was a lot of fun and we really enjoyed ourselves out there.

“Weekend approach is the same, same approach, same as what we have been doing, I am just out here each week to get a little bit better. Learn and grow is what we call it. That’s the goal.”