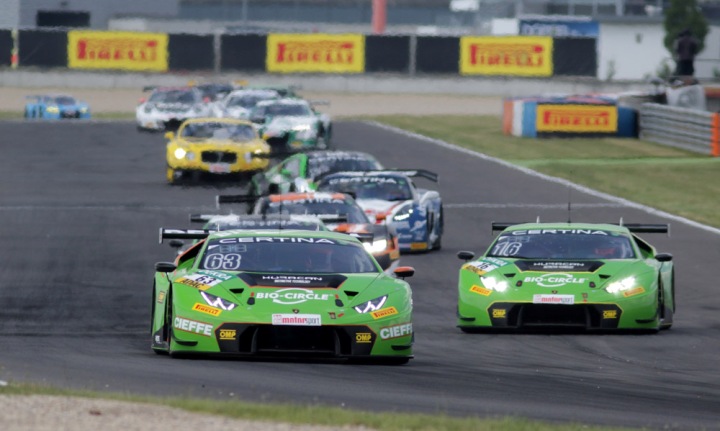 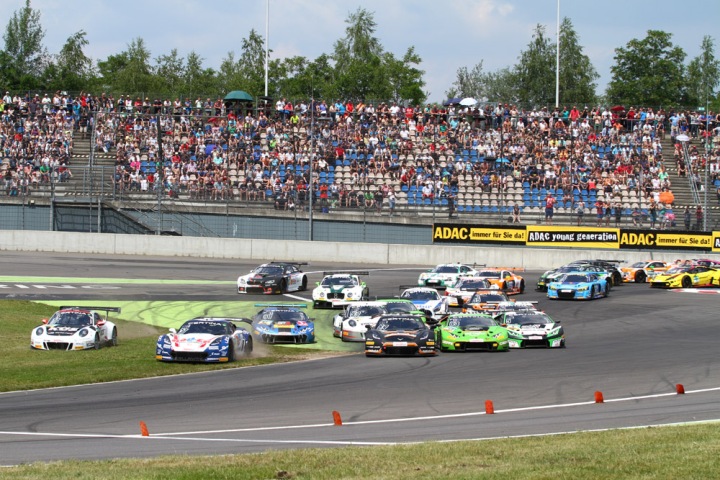 Missing out on Victory by 0.360 Seconds Only
Even if they just missed out on victory – Grasser Racing Team nevertheless was able to celebrate again at the great Motorsports Festival at Lausitzsring: Rolf Ineichen and Christian Engelhart finished second at the fifth race of the ADAC-GT-Masters 2016. „It was a race where everything really went perfect for us”, team principal Gottfried Grasser could happily confirm.

Already free practise had gone well for the double: P1 an P2 in the two sessions sounded quite promising for the rest of the weekend. In the two qualifying sessions on Friday afternoon both times P4 on the grid was reached.

Especially Rolf Ineichen was really happy with this result: “I only heard about where I had finished when I got out of the car”, he explained. “To be so far up as a Trophy driver is really great, I was actually surprised about it. But my lap worked really well, I could make perfect use of the tyres. The next lap they were already not as good any more. Thanks to my team which always does a great job,” he concluded.

Also in the race on Saturday the Swiss driver really delivered, could even hand the car over in third place to his teammate Christian Engelhart: “That was a really great race for us, we are ever so happy. I had a good start, did not lose a position and somehow even managed to overtake the BMW in front of me. The car was perfect until the end, as my teammate Christian was even able to fight for the win in the last laps.”

During the pitstops, Engelhart had climbed up to second. After two Safety Car periods due to first Rahel Frey ending up in the gravel and then a collision between Daniel Abt and Markus Winkehhock he even managed to put pressure on the leading Porsche with Martin Ragginger behind the wheel.

“Huge compliments to my teammate Rolf”, the Bavarian thanked Ineichen. “He kind of handed the race over to me like a present. He did a great job. In the end I still had a close fight for victory with the Porsche of Martin Ragginger. Had the race gone on for a bit longer, I would have had a real chance. A few times I pulled out of the slipstream but it was not enough to really make a move.” Just 0.360 seconds were missing in the end – the closest GT-Masters´ finish this year so far…

But Sunday then brought huge disappointment for the until then fourth classified in the Championship: Christian Engelhart had a good start and managed to take P3 immediately, but then things turned a bit rough at the first corner, some drivers slightly overdoing it, with racing turning more towards some kind of demolition derby.

Car number 63 did not get away unhurt: “It was so heavily damaged that we had to retire it in the pits. Another Lamborghini had hit it so hard that the oil cooler broke.  Looking at the Championship such a DNF is quite harsh of course”, Grasser was clearly annoyed about the incident.
“In general you could think that some people here were driving a bit too hard. But at least it was a good show for the nearly 70 000 spectators here at Lausitzring.”

After Engelhart´s retirement it looked like Mirko Bortolotti and Luca Stolz would be able to fill the gap for Grasser Racing Team.  Bortolotti, generally known as a real top qualifyer, had not managed to get a really clear lap at his GT Masters debut in 2016 and so had line up only tenth on the grid. But the Italian could make good use of the chaotic start lap and managed to claim P4 immediately.

At the re-start after the necessary SC period he passed the Audi of Christopher Mies, establishing himself in third. After the pitstop Luca Stolz even returned to the track in second, and even after having to let one of the Corvettes pass again, P3 and another podium finish seemed to be safe.
But with only four laps to go, race control imposed a drive through penalty on the Grasser car: “We were driving towards the pitlane exit with 57 kph, but the stewards nevertheless thought that we had blocked the Corvette”, Grasser was obviously disappointed. “But in the end we have to accept the decision.” With a nice overtaking during the last lap, Luca Stolz at least managed to secure P7 and the best Lamborghini result in the Sunday race.

The first race on Saturday the pairing had started from fifth on the grid and also finished in fifth position. A result that Stolz was not too content with: “In general it was a difficult race for us. Starting from P5 we actually planned to look further so the front, but in reality we then more often had to check our mirrors about what was coming from behind. Fifth place is okay, but not really what we had hoped for”, he stated.

Mirko Bortolotti thought “that the car was not totally where we wanted it to be. Fighting with some of the other manufacturers is still difficult for us.” But he was really pleased “to be back to the ADAC GT Masters. It´s a great championship and the atmosphere here at Lausitzring is simply fantastic.”

Gerald Tweraser and young Nicolas Pohler, who made his first GT Masters appearance, shared car number 11. The third GTR car was brought to a  GT Masters event fot the first time. Both struggled slightly in the two races, partly although because of being innocent victims of harsh attacks in the midfield.

On Saturday they were first spun around by a competitor who immediately received a penalty for this action, but even after having to serve a drive through penalty themselves later on for a slight pitstop infringement, they still managed to finish 16th.  But on Sunday things took a turn for the worse: Two crashes in a row meant the car having finally to be retired in the pits.

„A really good Saturday, but a really bad and unlucky Sunday”, team principal  Gottfried Grasser resumed. “But that´s something you have to live with in racing. What´s also important for us is to know that we are competitive. Thanks to all our drivers, team members, fans and sponsors! Now we will all get a little break until the end of June, when we will be heading for the Blancpain GT Series 1000 Km race at  Paul Ricard in France.”