Home 2022 Sevens Series title up for grabs in Los Angeles 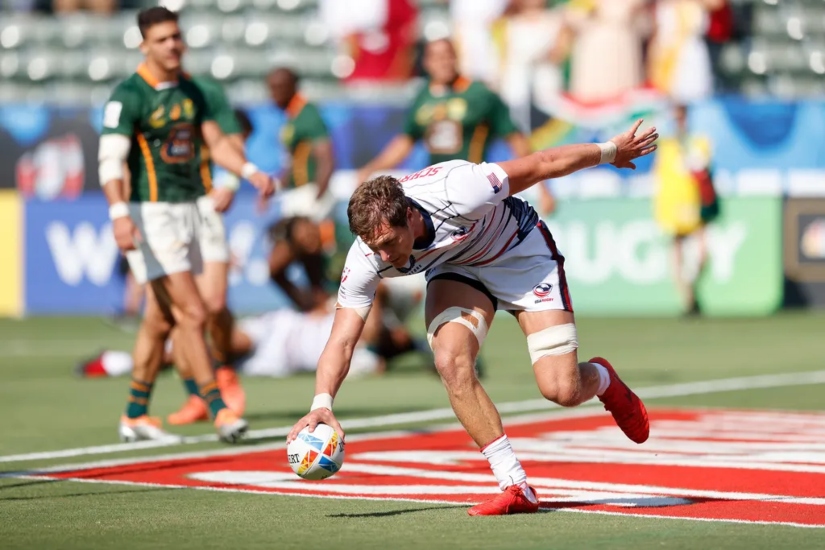 Four teams can still claim the title as Series leaders South Africa fail to reach quarter-finals, giving Australia, Argentina or Fiji the chance to clinch the Series with gold in LA

An enthralling end to the HSBC World Rugby Sevens Series 2022 awaits in Los Angeles on Sunday as four teams enter the final day of action with a chance of becoming Series champions.

Current leaders South Africa failed to reach the quarter-finals following agonising defeats against hosts USA and New Zealand on day one, meaning title rivals Australia, Argentina and Fiji could overtake them and snatch the Series honours with gold in Los Angeles.

Australia and Argentina will be aiming to make history, having never won the Series before. While both South Africa and Fiji will be hoping to claim their fifth Series title.

Australia, Fiji, New Zealand and Samoa qualified for the quarter-finals in style with perfect win records in their pools, recording a hattrick of victories to secure their passage to Sunday’s finals day.

The quarter-final line-up sees Australia face Kenya who are being cheered by a huge contingent of fans in LA. Fiji will come up against hosts USA who impressed on day one. Argentina will have to overcome Samoa to keep their Series title hopes alive while New Zealand will play Ireland.

South Africa, who won the first four tournaments of the 2022 Series, currently lead the way after eight rounds with 124 points and would have secured the Series title by reaching the final in LA but will now face a nervous wait on Sunday as the results of their rivals will determine their fate.

Australia are two points behind on 122 and will clinch the Series title if they reach the final in LA, and also if they finish third and Argentina do not win gold.

Argentina are currently six points adrift of South Africa on 118 points and will win the Series only if they secure gold in LA and Australia do not reach the final.

Fiji are currently fourth in the standings on 104 points but the system in place in 2022 ensures that they retain a shot at claiming a fifth men’s Series crown despite missing the tournaments in Malaga and Seville at the start of the year. Fiji could win the series if they take gold and Australia finish no higher than fourth.

Following the decision for England, Scotland and Wales to combine as a unified Great Britain team in the 2023 Series, there will be no team relegated from the 2022 Series.

The HSBC World Rugby Men’s Sevens Series 2022 Awards take place on Sunday evening to recognise and celebrate the outstanding players and teams who have lit up the 2022 Series.

Australia won the women’s Series which concluded in Toulouse, France in May. Australia were the dominant team throughout the 2022 Series, showing great consistency to win four gold, one silver and one bronze medals from the six rounds of the competition.

The year 2022 is a huge one for rugby sevens, following the grand finale of the men’s Series in Los Angeles, all eyes will turn to Cape Town, South Africa for what promises to be a spectacular and record-breaking Rugby World Cup Sevens 2022 on 9-11 September.

Los Angeles will host the 2028 Olympic Games, which will see rugby sevens’ fourth appearance at the Games since the sport’s debut at the Rio 2016 Games. – WORLD RUGBY