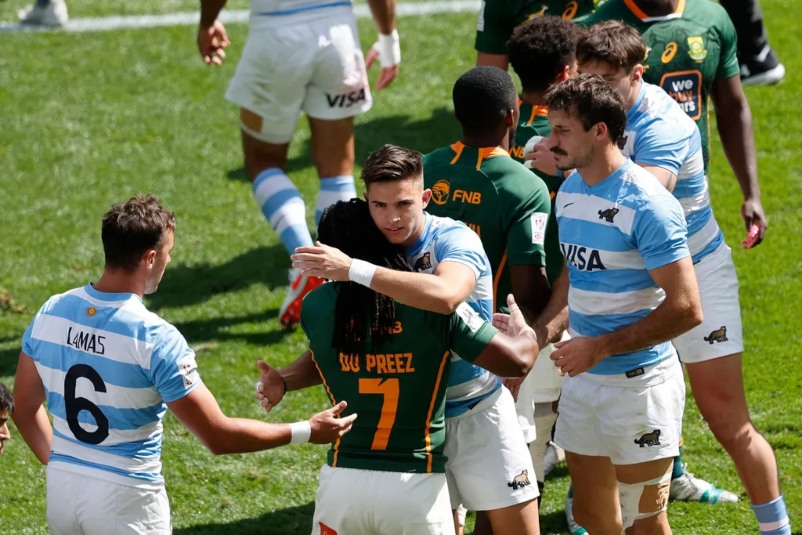 Argentina currently lead Series rankings with 118 points, ahead of South Africa on 116 points and Australia with 110 points, London is the penultimate round before finale in Los Angeles

A huge crowd of more than 46,000 fans filled Twickenham Stadium with noise and colour as the best teams in the world put on a superb showcase of high octane rugby sevens on the first day of the HSBC London Sevens on Saturday.

The eighth and penultimate round of the HSBC World Rugby Sevens Series 2022 saw current Series leaders Argentina fail to reach the quarter-finals after a dramatic last gasp defeat to Ireland in their final Pool C encounter.

Hosts England will face Fiji in what promises to be a thrilling quarter-final after victories over Scotland and Japan were enough to secure their progress despite defeat to Samoa in their final Pool D match.

England will need the full support of their home crowd in tomorrow’s quarter-final against double Olympic Champions Fiji who arrived at Twickenham in confident mood after reaching the final in the last three rounds since returning to the Series, winning gold twice in Toulouse and Singapore.

Fiji are also defending champions in London having won the title the last time the event took place in 2019.

Today’s results mean South Africa have the opportunity to clinch the Series title on Sunday should they reach tomorrow’s final.

The battle for the men’s Series title is extremely tight with only eight points separating the top three teams ahead of the event in London: Argentina (118 points), South Africa (116), and Australia (110) while the likes of Ireland and Fiji have an outside chance of clinching the title.

The unique rankings points system for the 2022 Series sees only the best seven results from each team count towards the final standings and the race for Series medals and to avoid the two relegation spots is on.

Finals day gets under way on Sunday at 09:30 local time (BST). England v Fiji is the first of the cup quarter-finals at 10:58, followed by New Zealand’s clash with Ireland at 11:20.

Samoa vs Spain is next up at 11:42, before South Africa take on Australia to decide the final semi-finalist at 12:04.

The weekend reaches its climax with the bronze medal final at 17:28, before the cup final takes centre stage at 17:58.

Remaining tickets are available from https://www.twickenhamstadium.com/hsbc-london-sevens/tickets.

Australia won the women’s Series which concluded in Toulouse last weekend. Australia were the dominant team throughout the 2022 Series, showing great consistency to win four gold, one silver and one bronze medals from the six rounds of the competition.

The England women’s team will showcase their skills to the Twickenham Stadium crowd in practice matches on Sunday as part of their preparations for the Commonwealth Games rugby sevens competition, which will take place in Birmingham, England on 29-31 July.

The year 2022 is a huge one for rugby sevens. Following the Commonwealth Games and the grand finale of the men’s Series in Los Angeles on 27-28 August, all eyes will turn to Cape Town, South Africa for what promises to be a record-breaking Rugby World Cup Sevens 2022 on 9-11 September.

Meanwhile the schedule for the 2023 HSBC World Rugby Sevens Series is due to be announced next week.