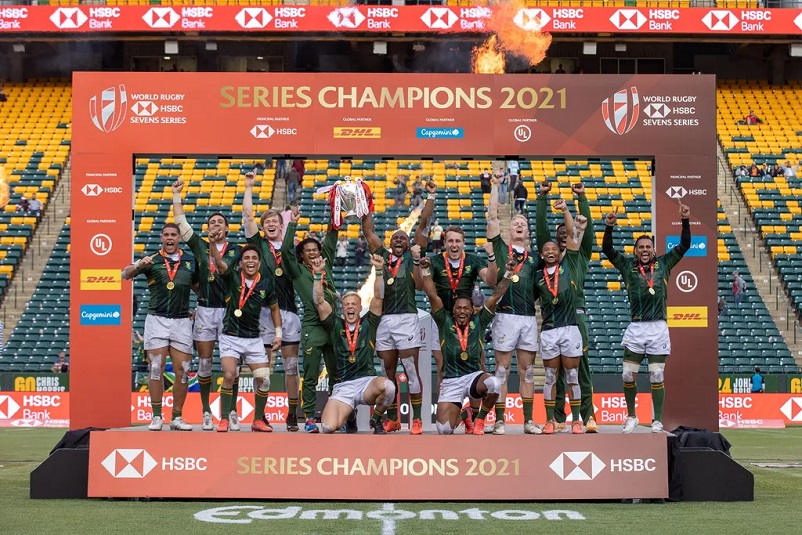 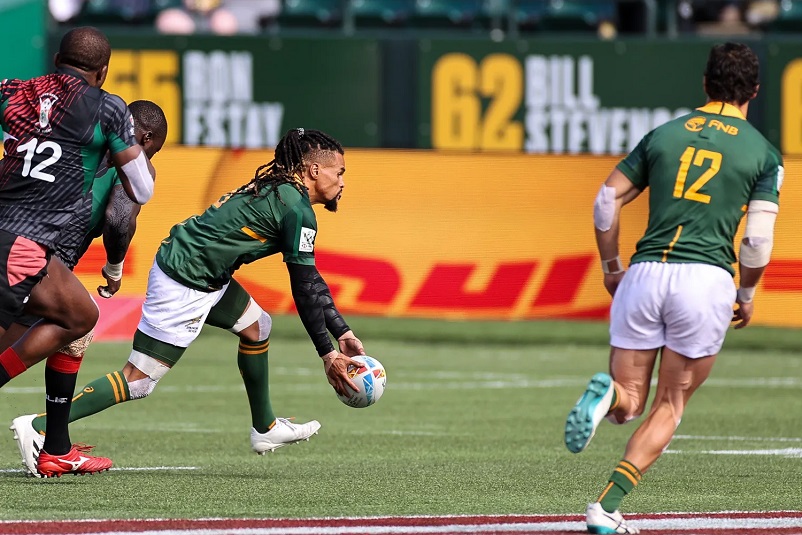 South Africa won the HSBC World Rugby Sevens Series 2021 in style, beating Great Britain 24-12 in the final in Edmonton to back up their Victory in Vancouver last weekend and claim their fourth Series title.

The Blitzboks were the leading try scorers, leading points scorers and winners of every game across both weekends to finish the HSBC World Rugby Sevens Series 2021 as deserved champions. They reached the final thanks to a 33-7 defeat of Kenya in the semi-final, following a comprehensive 46-0 quarter-final win over Hong Kong.

Great Britain finish second in the Series standings, ahead of last weekend’s beaten finalists Kenya, who reached the podium again in Edmonton by overcoming spirited hosts Canada 33-14 to finish with bronze.

Germany were the surprise package of the tournament, running out 24-19 winners over the USA to claim fifth place in Edmonton, following earlier victories over Great Britain, Jamaica and Hong Kong.

Great Britain’s women showed their consistency and class to repeat their triumph in Vancouver by overpowering the USA 22-5 to secure the women’s fast four title for the second successive weekend. Canada thrashed Mexico 63-5 to take third place and entertain the home crowd.

South Africa captain Siviwe Soyizwapi said: “I can’t explain the feeling. I think the most amazing thing is the feeling of reward of all the hard work that each and every guy in this team puts in. The Olympics were a really massive disappointment so we just wanted to show that is not who we are, and we just stuck to our guns and went back to what works for us.

“The future is really exciting, the young guys have got a taste of the World Series and gained experience of what it is like playing on the highest stage and that will be really good for us coming in to the new season.”

South Africa’s Muller du Plessis who was awarded HSBC Player of the Final and scored 11 tries over the weekend in Edmonton, said: “It has been an awesome two weeks, we came here with a mission to stick together and focus on our system and build on that so I am very proud of the team.”

South Africa coach Neil Powell said: “It’s always difficult backing up a victory the next week but we kept our feet on the ground and credit to the boys, they have been fantastic over the last two weeks. They have implemented what we discussed on the field and it has really shown in the results over the past two weekends.

“It’s been great just to be back playing again on the circuit. Hopefully we can get some normality back and play a full season next season and build up to the World Cup in Cape Town. It’s always a great vibe when the crowds fill the stadiums and I think Canada already showed a glimpse of what it can be again.”

Great Britain’s Jasmine Joyce, who was named women’s HSBC Player of the Final for the second weekend in a row said: “It feels absolutely brilliant to win again and a credit to all the new girls that have come in, they have been excellent on and off the field and have really performed and stepped up on the pitch. We’ve learnt so much on and off the pitch here and I’ve enjoyed every moment of it.

“It was unfortunate we couldn’t have fans at the Olympics in Tokyo, but it’s been brilliant having a crowd back here, they’ve cheered for every good piece of rugby.”

Following rugby sevens’ captivating second appearance at the Olympic Games in Tokyo, the sport returned to HSBC World Rugby Sevens Series action with this month’s pair of HSBC Canada Sevens events in Vancouver and Edmonton forming the shortened 2021 Series, alongside women’s fast four tournaments. Given the unique circumstances due to the global pandemic, there is no relegation from the 2021 Series.

With more than 35 Olympians on show, the crowds were treated to a pair of action packed weekends full of thrilling rugby sevens as Edmonton played host to a Series event for the first time.

There are now just two months to go until the 2022 Series kicks off with successive events in Dubai on 26-27 November and 3-4 December 2021. The full 2022 Series schedule will be announced shortly.

Absent men’s Olympic champions Fiji and other Series powerhouses including New Zealand and Australia will have taken note of South Africa’s performance ahead of the start of the 2022 Series and no doubt been impressed by the way Neil Powell’s new-look squad came together so quickly.

Rugby sevens players and fans can look forward to a very busy and exciting year ahead with the 2022 Series followed by the Commonwealth Games in Birmingham, England, on 29-31 July 2022 and Rugby World Cup Sevens in Cape Town, South Africa, on 9-11 September 2022. – WORLD RUGBY