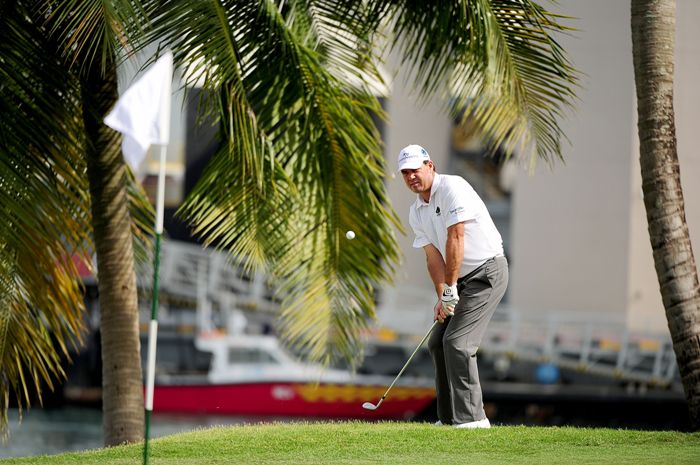 South Africa’s Keith Horne upstaged the tournament’s stars by firing an opening five-under-par 66 to grab the clubhouse lead at the US$1 million SMBC Singapore Open which was suspended due to lightning threats on Thursday.

The 44-year-old, who is still searching for his maiden victory on the Asian Tour, mixed his card with seven birdies and two bogeys to take a one-shot advantage over Korea’s Byeonghun An and world number one Jordan Spieth of the United States after the duo returned with matching 67s.

American Berry Henson, a one-time Asian Tour winner, was five-under through 17 holes while Thailand’s Namchok Tantipokhakul lurked closely behind at four-under after 14 holes before play was brought to a halt for the second time at 6.39pm (local time) because of lightning activities around the Serapong course at Sentosa Golf Club.

A total of 57 players will resume their first round rounds at 7.30am with the second round scheduled to commence at8.10am.

Horne narrowly kept his playing status on the Asian Tour by finishing in 59th place on the Order of Merit last season. However the South African’s return to the Sentosa Golf Club has brought back the early cheers and sparkle to his game.

“I’m really happy with my result today as I haven’t played here for a couple of years. But whenever I do come over here, I generally play well,” said Horne.

“So it’s nice to renew my friendship with the golf course. I had a bit of a walkabout in the middle of the round but then I also had a good run coming in,” he added.

Horne credited his driver and short game for putting him into an advantageous position at the Singapore showpiece. He was also pleased to have outshone the tournament’s marquee names, almost half his age.

“I think they (Spieth and An) were just born when I turned professional so it’s always nice when you play well and get off to a great start. I putted great today which was important. I put a new driver in the bag today and I hit it so far and straight and that made a huge difference,” said Horne.

Spieth showed no signs of nerves despite playing at the Serapong course for the first time. He enjoyed a bogey-free run highlighted by an opening 20-footer birdie putt.

“My speed control was great, with no three putts, I had a lot of putts over 30 feet today, I know I was not hitting it close enough but I managed to hit the fairway to a good number and get onto the greens where I just need to two-putt. It was pretty stress free and but there were no real opportunities,” said Spieth.

An, voted Europe’s Rookie of the Year, braved the heat and humidity to put up a strong performance that underscores his status as the world number 26.

“I think it’s too hot. I wished it was cooler but you know, I cannot have any complaints as there was no rain and the winds were fairly calm today.

“I definitely didn’t leave any putts out there that’s for sure. Putted great and made all the putts I had to make. I didn’t really make any stupid mistakes today with my shots, so I was happy overall,” said An.

Leading Scores after round 1 of the SMBC Singapore Open being played at the par 71, 7398 Yards Sentosa GC course (am – denotes amateur):