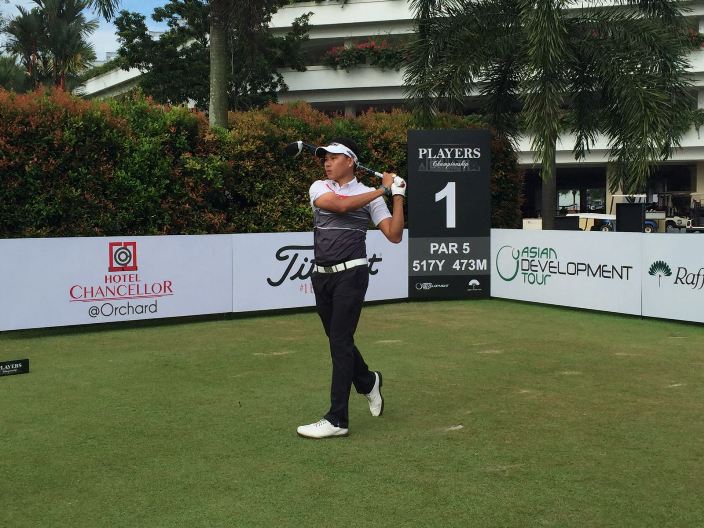 Overnight co-leader Tirawat Kaewsiribandit of Thailand remained in the hunt for his maiden Asian Development Tour (ADT) victory after carding a third round three-under-par 69 to lead by one shot at the US$100,000 Players Championship on Friday.

The 26-year-old Thai, who had held a share of the lead since day one, marked his card with one eagle and four birdies against three bogeys for a three-day total of 15-under-par 201 at the Raffles Country Club’s par-72 Palm course.

Countryman and good friend Itthipat Buranatanyarat was left to rue a costly double-bogey on the last which consigned him to a 70 for second place at the Players Championship, which is the first ADT event to feature in Singapore since the burgeoning Tour was inaugurated in 2010.

Choo Tze Huang emerged as the highest-placed Singaporean in tied-10th position on 207 following a superb 66 while Quincy Quek capped his best efforts so far this week with a 68 to move to tied-19th place.

Tirawat holed out an eagle on the first after hitting a three-iron from 240 yards to about three-feet from the pin. He added two birdies on fifth and eighth to turn in 32 before trading two birdies against two bogeys on his way home.

“Everything went well today, especially on my front nine. I putted well. I stumbled a bit on the back nine and three-putted two holes but I managed to recover well. I was just trying to save for par coming home and not make big mistakes out there,” said Tirawat.

“I am happy to be in a good position heading into the final round. I will try and play my game and not think too much about winning. If I can take advantage of the par-fives tomorrow, I should be able to win,” added the Thai.

Itthipat, who held a share of the overnight lead, was cruising with four birdies through 17 holes before stumbling with a double-bogey on last where his second shot caught a flyer out of the rough and into the bunker.

“I guess I was unlucky on the last hole. I played pretty good today. My tee shots were not as good as the last two days but my approach shots were great. I sank my first three birdies on fifth, eighth and 13 from about 10-feet and drained a one-footer birdie putt on 16,” said the 22-year-old Ithhipat, a one-time winner on the ADT.

“I enjoyed myself out there. Tirawat is my close friend and I had fun playing with him today. I wasn’t looking at the leaderboard out there but I was tracking our scores inside my head (laughs). It’s going to be exciting tomorrow. We will see how it goes,” added the cheerful Itthipat.

Andrew, who joined the professional ranks in 2013, is upbeat about his prospects after signing for a bogey-free round highlighted by three birdies to put himself in contention for the very first time on the ADT.

“I hit my irons very good. I made two good par saves from four metres on 11 and 13 and I think that was the highlight for me today. It has been a great run for me so far this week and I have really happy with how I have performed so far,” said Andrew.

“I have been hitting well for the last three months. I have been working with my friend and coach Johannes Dermawan on my swing and I am glad it’s paying off. I will try my best to cap another good round tomorrow,” added the 23-year-old Indonesian.

The winner of the ADT’s season-opener will earn a coveted spot in the US$1 million SMBC Singapore Open which will take place at the Sentosa Golf Club from January 28 to 31 next week.

Scores after round 3 of the The Players Championship being played at the par 72, 6824 Yards Raffles CC course: