Home 2022 The PEUGEOT 9X8 to make its FIA World Endurance Championship debut at... 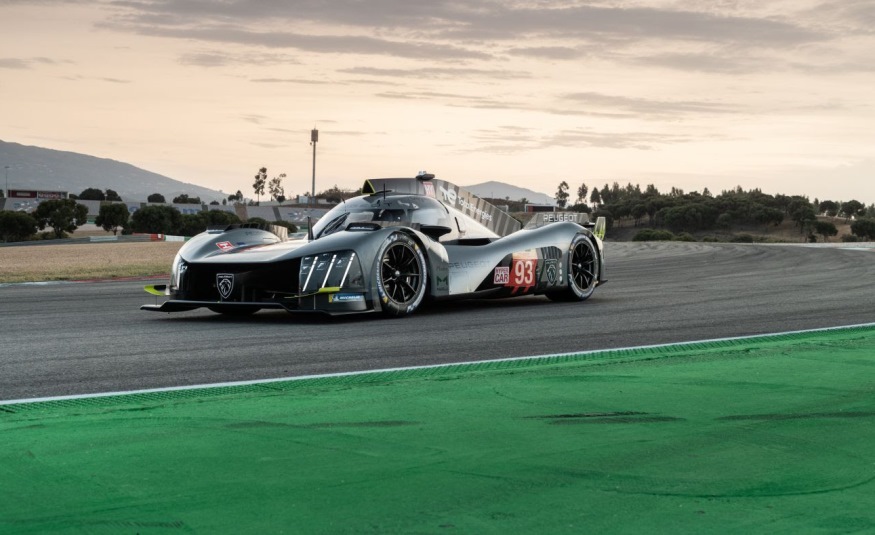 Less than a year on from the presentation that publicly launched the concept behind the PEUGEOT 9X8, and just five months after the car’s maiden track test, Team Peugeot TotalEnergies today unveiled its exciting new endurance racing challenger at Portimão, in southern Portugal.

The pioneering four wheel-drive, hybrid-electric Hypercar is poised to make its competitive debut in July at Round 4 of the 2022 FIA World Endurance Championship (FIA WEC) at Monza, Italy. For PEUGEOT, the countdown is well and truly on.

A new era is about to begin for PEUGEOT in the world of endurance racing when it travels to Italy for the 6 Hours of Monza on July 10. Following in the wheel-tracks of its Le Mans-conquering 905 and 908 predecessors, the French manufacturer’s latest creation – the PEUGEOT 9X8 – will bring an unprecedented design philosophy to the FIA WEC grid.

This ground-breaking Hypercar, which catches the eye at once due to the absence of a rear wing, conforms to the regulations that govern the ACO and FIA’s Le Mans Hypercar (LMH) category, which is more accessible than LMP1 but every bit as competitive.

It is the perfect embodiment of PEUGEOT’s strategy, with a distinctive look characterised by a cat-like stance, uniquely sleek silhouette, forceful brand identity and the same familiar three-claw lighting signature as the manufacturer’s road-going models. As a shop window for PEUGEOT’s technological expertise in the fields of hybridisation and electrification – both key elements of the brand’s energy transition strategy –, it underscores the company’s commitment to excellence with regard to both its competitive endeavours and its customers.

Striking designs, a passion for motorsport and technological excellence are effectively the three PEUGEOT values that guided this ambitious programme which marks the brand’s return to endurance racing, with a particular focus on the Le Mans 24 Hours, an extraordinary event that has few rivals when it comes to evaluating and validating innovative ideas and technologies.

The build-up to a stimulating sporting and technological challenge

The PEUGEOT 9X8 is a four wheel-drive racing prototype with a powertrain developed under the control of Peugeot Sport’s specialists. Its rear wheels are driven by a 2.6-litre, bi-turbo, 520kW, V6 internal-combustion engine (ICE), while a bespoke, high-performance 200kW electric motor drives the front wheels.

Like the motor, the silicon carbide-based inverter was developed in association with Marelli. The car’s high-voltage, 900-volt battery was developed jointly with TotalEnergies/Saft and Michelin provides the tyres in compliance with the Hypercar class’s regulations.

The PEUGEOT 9X8 features athletic forms and measures 4.995 metres in length, sits 2 metres wide and 1.145 metres tall. It tips the scales at just 1,030kg and its tank holds up to 90 litres of TotalEnergies’ 100% renewable, Excellium Racing 100 fuel.

The unique collaboration between the PEUGEOT Design team led by Matthias Hossann and the Sport team under Olivier Jansonnie has resulted in a bold, stylish car that truly breaks the mould. During the presentation of the car that revealed the PEUGEOT 9X8 concept back in July 2021, many speculated that the lack of a rear wing would prove unworkable in reality.

However, the interpretation of the ACO/FIA’s LMH regulations inspired the department led by Peugeot Sport’s Technical Director Olivier Jansonnie to continue along this path. The on-track tests that have taken place since December at circuits with distinctly different characteristics (Portimão/Portugal, Le Castellet/France, MotorLand Aragón/Spain, Barcelona/Spain, and Magny-Cours/France) have since corroborated this disruptive concept, and the race car unveiled at Portimão ahead of its latest test conforms entirely with the vision embodied by the car presented in 2021.

More than 10,000 kilometres have been clocked up by the PEUGEOT 9X8 over the course of 25 test days. In parallel, the car’s homologation was administered in conjunction with the FIA, while the team led by Peugeot Sport Powertrain Director François Coudrain focussed on the development of the powertrain on the test bench, simulator and race track.

The completion of these vital phases, which were all key to honing the Hypercar’s reliability and performance, led to its competitive debut being delayed until after the 2022 edition of the Le Mans 24 Hours.

The PEUGEOT 9X8 will consequently join the FIA World Endurance Championship field for the 6 Hours of Monza (July 10) at Italy’s celebrated Temple of Speed where it will line up for the first time alongside its rivals.

In order to excel both on and off the race track, Team Peugeot TotalEnergies has joined forces with a number of international partners, all highly-regarded in their respective industries and all instrumental to the development process.

For example, artificial intelligence specialist Capgemini and Peugeot Sport work together to optimise the efficiency of the 9X8 – in particular its energy management during both the acceleration and regeneration phases.

Meanwhile, Peugeot Sport and Modex have pooled their ideas, creativity, technological visions and penchant for innovation to produce mutually-beneficial synergies.

All of these partners are driven to perform at their peak by the same passion for motor racing, innovation and progress.

The 2023 season will see Team Peugeot TotalEnergies contest the centenary edition of the Le Mans 24 Hours, taking on a number of international competitors fielding either Le Mans Hybrid (LMH, i.e. the same class as the PEUGEOT 9X8) cars or Le Mans Daytona Hybrid (LMdH) machinery. Next year’s event has been described by many observers as the crowning moment of a new golden age of endurance racing and is effectively shaping up to be a truly memorable encounter.

Although the 9X8 won’t appear at Le Mans in 2022, PEUGEOT was still keen to attend the event this year in order to meet its fans during the build-up to and during the race weekend itself. In association with the ACO (Automobile Club de l’Ouest), an exhibition entitled ALLURE-LE MANS dedicated to PEUGEOT’s outstanding history and success story at La Sarthe will open on May 21 at the circuit’s museum where the original version of the PEUGEOT 9X8 will be on display until September.

Spectators attending the 2022 race will also be able to visit the Fan Village where a special zone has been set aside for the PEUGEOT 9X8, along with a merchandise store for the purchase of official teamwear produced by Jack & Jones. The most committed fans might even be tempted to sample Kryptonite cocktails that take their inspiration from Peugeot Sport’s new colour signature!

Six drivers have been named to form the two crews at Italy’s 6 Hours of Monza on July 10, namely Paul Di Resta (GBR), Loïc Duval (FRA), Mikkel Jensen (DNK), Gustavo Menezes (USA/BRA), James Rossiter (GBR) and Jean-Éric Vergne (FRA). The exact composition of each trio will be confirmed in the coming weeks once the car’s test programme has been completed ahead of its competitive debut. The two PEUGEOT 9X8s will then go on to contest both the 6 Hours of Fuji, Japan, in September, and November’s 8 Hours of Bahrain.

Linda Jackson (CEO, PEUGEOT): “PEUGEOT’s participation in the FIA World Endurance Championship is further evidence of the brand’s ingenuity and longstanding passion for motorsport. It will also play a role in the essential transfer of technology from the race track to our road-going vehicles, particularly in the field of electrification. To illustrate how serious we are about energy transition, PEUGEOT has committed to electrifying its entire model range by 2024. What’s more, if we are to achieve our target of being electric-only in Europe by 2030, we know we need to excel in this domain, and motor racing is crucial to this objective. Even before the PEUGEOT 9X8 makes its race debut, the programme’s engineers have already carried over its hybrid system to one of our road cars – the PEUGEOT 508 Peugeot Sport Engineered. And other examples are similarly in the pipeline.”

Jean-Marc Finot (Director, Stellantis Motorsport): “At Portimão today, Team Peugeot TotalEnergies presents its PEUGEOT 9X8 Le Mans Hypercar prototype. This bold, sophisticated car wholeheartedly embraces the brand’s DNA and is the product of tireless teamwork involving our Sport and Design departments, boosted by the unstinting support of our key partners whose expertise in their respective fields has been essential. Success on the race track can only be achieved via a fusion of skills.”

Olivier Jansonnie (Technical Director, Peugeot Sport): “In presenting our new race car today, we are keeping the promise that we made last summer. The PEUGEOT 9X8 is effectively the physical embodiment of the concept we revealed back in July 2021. The challenge we have faced in recent months has been two-fold and has involved forming a team to then produce a car and prepare it for its competitive debut. With only weeks to go until its maiden competitive outing at Monza, the PEUGEOT 9X8 has been clocking up the kilometres in testing at a variety of circuits. At the end of the day, however, there is no substitute for actual racing and we can’t wait to discover the potential of our hybrid-electric Hypercar which was developed in-house to demonstrate our skills in the realm of hybridisation and other areas.